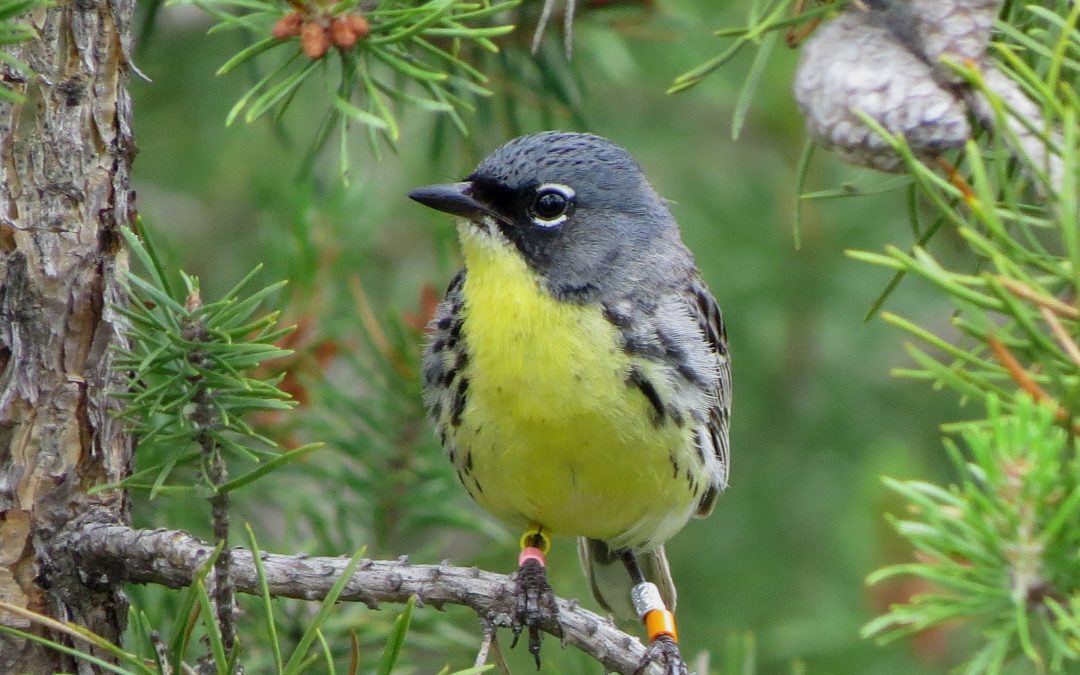 Each year the Bird Protection Fund reviews conservation needs in Wisconsin and prioritizes projects where funding can make a critical impact for bird conservation. Every year a few priorities always rise to the top. Funding these projects is made possible in part thanks to the Great Wisconsin Birdathon.

The Kirtland’s warbler is a federally endangered bird that has been known to nest in Wisconsin since 2007. This project is an effort to annually monitor breeding pairs and nests, control cowbird parasitism using traps, locate sites being occupied by birds that were previously unknown, and estimate population size in Wisconsin for the official census. DNR and U.S. Fish & Wildlife Service staff also guide tours every spring to give project supporters a chance to see this rare species. For the latest nesting season updates visit the USFWS Wisconsin Ecological Services Field Office.

Bird City Wisconsin recognizes communities for their bird conservation end education actions while working with them to do more. Each year new communities commit to being Bird Cities.

We support our communities in their efforts to protect and manage green space, educate their citizens, build and erect nesting structures, landscape with native plants, reduce threats to birds like collisions and outdoor cats, and generally make urban areas friendlier for both birds and places where people want to live and work.

The astounding growth of the program and Bird City’s 100% community retention rate demonstrate that Bird City status is valuable to Wisconsin’s many conservation-minded residents. Does your community have what it takes to be a Bird City? Visit birdcitywisconsin.org.

Wisconsin Breeding Bird Atlas II is a 5-year citizen-science project that seeks to determine the distribution and abundance of Wisconsin’s breeding birds. It replicates the methods of the first Wisconsin Breeding Bird Atlas (1995–2000) and makes these data readily available to support bird conservation efforts. The project has a continued need for volunteer surveyors, with coverage still needed in every corner of the state.

As a founding member of the Whooping Crane Eastern Partnership, the Natural Resources Foundation is deeply committed to saving these incredible birds. Funding from the Bird Protection Fund helps to further these efforts by supporting internships at the International Crane Foundation. These interns work hard monitoring adult pairs to identify foster groups for the captive-raised chicks. This technique aims to reduce what had been a high rate of chick mortality of wild-hatched whooping cranes. Hopefully, chicks fostered by adult whoopers will learn behaviors costumed people are not able to teach them, and they will be better able to raise their chicks to fledging in the future.

The Wisconsin Stopover Initiative (WISI) is a partnership of government agencies, private organizations, businesses, and individuals all working to raise awareness of migratory birds of the Great Lakes and promote protection of stopover habitat throughout the Great Lakes. WISI provides important resources to better understand the needs of migratory birds and the threats to their survival, while also providing tools to aid in designing and implementing bird conservation efforts.

The Wisconsin Bird Monitoring Program relies heavily on volunteers who take time to observe and report their bird sightings throughout the state. In 2016, as part of the Western Great Lakes Owl Survey, more than 55 volunteer birders surveyed 70 roadside routes in April, detecting 226 owls of 6 species, including 118 Barred, 60 Great Horned, 20 Eastern Screech, 11 N. Saw-whet, 6 Long-eared, and 1 Short-eared Owl. In May-June, nearly 50 Wisconsin Nightjar Survey volunteers ventured to 55 routes and detected 142 Whip-poor-wills, only 18 Common Nighthawks, and a number of other night creatures such as owls, coyotes, frogs, and more. With the ultimate goal of long-term assessment of population trends, the Wisconsin Bird Monitoring Program works closely within the broader Midwest Coordinated Bird Monitoring Partnership and has begun the process of uploading all survey data from past and current years to the Midwest Avian Data Center, thus enhancing the reach and utility of project data and results.

Osa Conservation manages and protect properties in the Osa Wildlife Refuge, which serve as a natural biological corridor between the Corcovado National Park and the Matapalo Cape and surrounding forests. With funding from the Bird Protection Fund, Osa Conservation plants trees, manages a seed nursery, and invests in other maintenance, monitoring, and improvement. Other ongoing activities include monitoring large areas of restored forest and the thousands of trees planted in the Neenah Paper plots at Cerro Osa and the Yellow Billed Cotinga Sanctuary. Osa Conservation also collects important data on biodiversity, seedling survival, and growth rates in their land parcels, which provide critical bird habitat for endemic species including critically endangered birds (Yellow-billed Cotinga) and also migratory birds from North America, with some 55 species that breed in Wisconsin and spend the winter in the Osa.