Wetland Restoration in Wisconsin: A private landowner tells his story 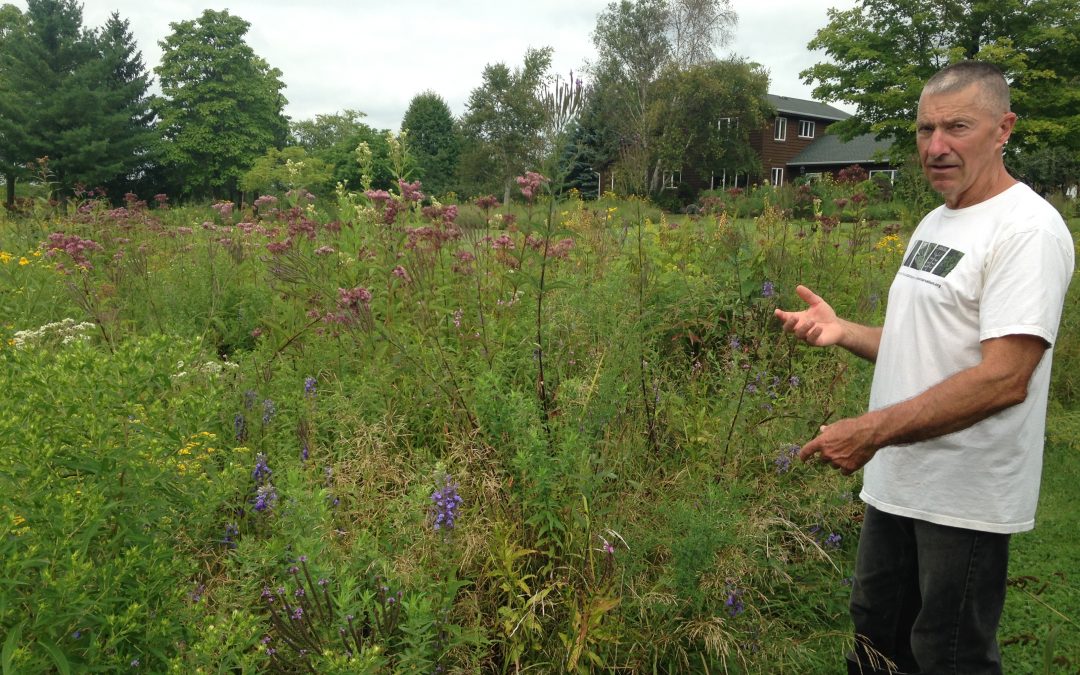 Mequon resident, private landowner, and Foundation member Ben Arnold loves nature, and not just from a distance. Whether it’s keeping a careful eye on a clutch of hatching turtle eggs, planting rare native species or sharing photos of a pheasant that wandered across his yard, Arnold is always engaged. Forty years ago, Arnold’s love of nature took him on a surprising journey—the challenging and rewarding journey of native forest, prairie and wetland restoration to create a varied ecosystem capable of supporting a diversity of life.

Ben Arnorld on his property talking about prairie restoration. Photo by Chelsea Johnson

Arnold’s relationship with nature began in his childhood on a dairy farm in central Wisconsin.

“I was always into nature growing up on the farm,” Arnold said. “We had forests, wetlands, a lot of wild land.”

After attending University of Wisconsin-Stout, Arnold became an industrial education teacher at Milwaukee Trade and Technical High School, where he taught for 33 years until retiring in 2006. Not content with urban life in the early years of that career, Arnold bought twenty acres in 1978 in the city of Mequon, where the landscape is a mixture of farms, subdivisions and undeveloped land, all part of the Milwaukee River watershed. Arnold knew he wanted to live in a place where he could feel connected to nature and build his home.

From farm field to thriving wetland

When Arnold bought his property, the land was being used for row crops. Parts of the property had once been a wetland, but the clay-based soils had been tilled and drained of surface and sub-surface water to create farmable land. It’s a familiar story. Historically, 30 percent of Wisconsin’s land area was wetlands, but with land use changes from agriculture and development, we’ve lost half of our wetlands. Losing wetlands also means losing wetland benefits like flood control, wildlife habitat, and healthy water quality.

Arnold knew he wasn’t going to be farming his land, but hadn’t decided what he would do instead.

“When I bought it, I didn’t know how I was going to develop the property,” Arnold said. “At the time it was zoned for 1.5-acre lots for houses.”

But as he got to know his land and watched native plants return to the soil, his path became clear.

“As time went along, I saw the benefit of what was here. No way in heck did I want houses here.”

Arnold committed to restoring the property back to wetland, joining the hundreds of other Wisconsin landowners restoring, protecting and caring for wetlands. Private landowners own 75 percent of Wisconsin’s remaining wetlands, giving landowners like Arnold a vital role in caring for them.

On weekends and summer breaks, Arnold put his industrial expertise to work digging shallow scrapes to remove decades of runoff silt, removing underground drainage tiles and constructing his home at the center of the property, where he now lives year-round. One of Arnold’s biggest restoration priorities was the return of native species of a wetland plant community. Some species he planted, but some species returned on their own from long-dormant seeds in the soil.

“Every plant has its benefits,” Arnold said. “By having native species, you attract songbirds, beneficial insects and mammals.”

Ducks have made good use of Ben’s restored property. Photo by Ben Arnold

Currently, hundreds of plant species have returned or been re-introduced to his property, attracting wildlife of all kinds. The marshes, wet prairies and seasonal wetlands Arnold restored are now home to thriving wildlife and hundreds of plant species, including rare and threatened plants. Arnold still works hard to maintain his land’s health by controlling invasive plants and taking other actions, but he also spends a lot of time enjoying his property.

“Every day I’m out in the wetland,” Arnold said. “I love walking in the early morning and at dusk. I know all the animals from observing them.”

In addition to herons, flowers and monarch butterflies, Arnold’s property also attracts people; his restored wetland is a frequent stop for Field Trips and educational groups from all over the state.

“What’s the sense of knowing all this if you can’t share it?”

It’s especially important for Arnold to share lessons learned with people interested in similar projects on their properties.

“A lot of people who see my land aren’t experts,” Arnold said. “They might own some acreage and want to do some restoration. Visiting my land is an educational experience for them.”

Sunset in winter from Ben’s property. Photo by Ben Arnold

Arnold frequently encourages visitors thinking of restoring a wetland or other ecosystem on their property to make the commitment.

“If someone has a thought of doing a restoration project, I would suggest go for it,” Arnold said. “Learn as much as you can, visit as many restoration projects as possible, consult experts. Don’t be intimidated–you can do this.”

Whether a landowner is interested in a full-scale restoration like Arnold’s or a smaller project, caring for wetlands benefits land, water, and wildlife. And as many landowners find out, caring for their land often benefits them.

“Restoring my property is the most rewarding thing I have done in my life,” Arnold said. “It’s a work of art as far as I’m concerned.”