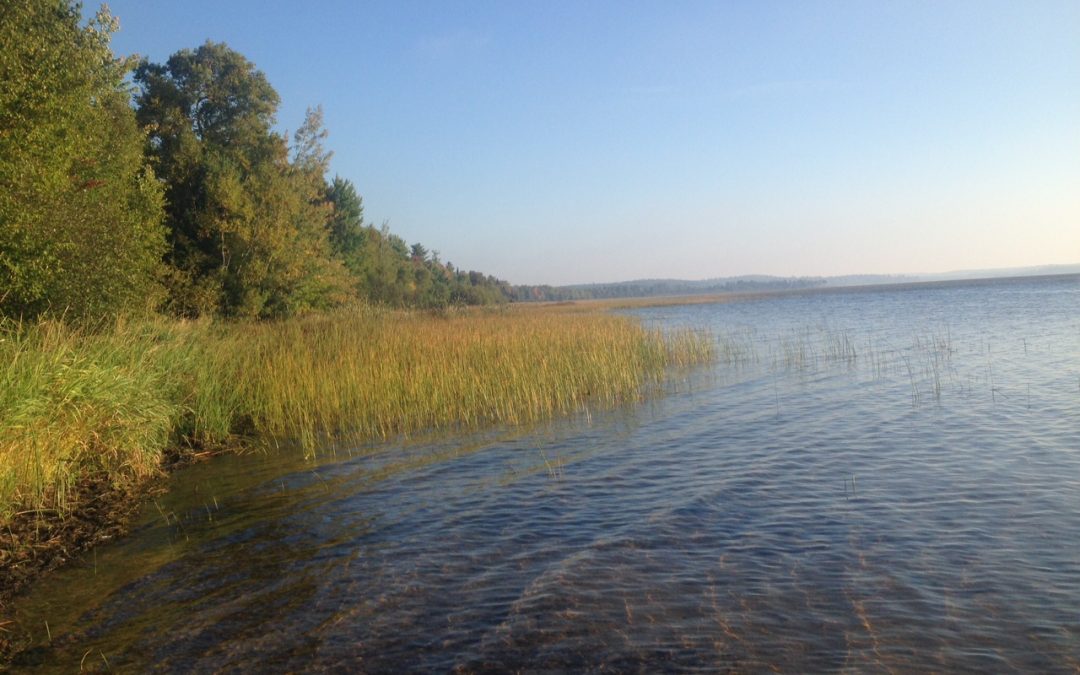 Listen to Ruth tell the story of Day II in her own voice:

Today is Monday, Sept. 28, day number two. This was an interesting day of paddling. We went from about mile eight to mile 35. The upper reach of the headwaters is a huge, winding stream that turns into endless alder thickets. When the river goes through the alders, it seems to spread out and what’s left is a shallow rocky bed. I had a lot of gear, I think I’m probably carrying about 60 pounds of gear, plus me in the boat. It just got to be a lot, so I ended up walking the boat, or lining the boat, which means you kind of walk down the bed of the stream and you pull the boat behind you and it’s really, really slow. So we didn’t get as far as we hoped to.

Last night was pretty incredible. We saw the lunar eclipse from our campsite and we just had a wide-open view of the moon. One of the neat things we noticed is as the moon became obscured by the shadow of the Earth, the stars started to come out, just like a switch had been turned on. It got brighter and brighter and brighter and there were just millions of stars out there with no city lights around. Then, as the moon was changing from red to kind of gray and the lighter part of the moon was obscured by the clouds, it was shifting in and out, and it just seemed like there was an extra power at work on that lunar eclipse. Denny Caneff was paddling yesterday with me and we were talking about how the native people must have really wondered at this and created a lot of myths and legends about the lunar eclipses until we figured out that the Earth is round and goes in orbit around the sun and so on. It was just kind of a wondrous evening; I really enjoyed it.

It has been kind of tough going through the alders, but in some places it was like a tunnel, which was really cool. When we got a little bit further down, maybe mile 10 or 11, we started moving into just really pretty tall pine spruce and hemlock, even some tamarack in there, with really steep, sandy banks, about 15-20 feet high. I really loved that part of the river, it felt like arboreal forest. So the character changed quite a bit.

One of the things that’s interesting is there’s just not a lot of bird life. I know the birds have migrated. A lot of the songbirds have already headed south. Some of the birds that we saw in the last two days are bald eagles—incredible views of bald eagles—we saw lots of kingfishers, belted kingfishers and then heard chickadees and I saw one yellow-shafted flicker.

What we are seeing a lot of is evidence of beavers at work. They love the alder thickets. We saw some places where the alders were just mowed down and there were six-inch pointy stumps sticking up. It would be very hard to walk in there. We saw huge beaver lodges and, of course, we had to cross a lot of beaver dams. But we were pleasantly surprised that there weren’t as many beaver dams as we had heard.

The other thing that happened today is that I paddled for the first time alone. A little after lunch we crossed River Road Boat Landing and Denny Caneff with the River Alliance got his bike that he had stashed in the bushes and he headed back up to his car. It was really great having Denny on the trip. He really helped me a lot when there was super shallow water or we had to go up a beaver dam or if I got hung up on something.

My boat is really, really heavy, and I am super tired today. I just have too much stuff. Instead of Instant Oatmeal, I have this really heavy granola. I have this huge first aid kit. I’m going to try to cut back on some of the things and leave it or mail it home; I’m not sure exactly what I’ll do. But I’d like to get rid of some of the weight because it’s harder to paddle and it’s going to be hard to portage. I’m lashing things on top of the boat and that’s never a good thing because you catch more of the wind and sometimes your stuff gets caught. Today I had some of my deck lines get caught by dead fall, which held me back, and they would snap out of the boat. It’s just too much stuff hanging off the top of the boat. So I’m going to try to work on that and streamline it a little bit.

This morning we also got caught in a thunderstorm –a steady rain almost all morning. One of the really fun things about that if you’re in a kayak is you have a spray skirt on, you have a raincoat on, you have a hat on and you’re this little self-contained unit paddling down the river. It’s actually kind of fun. The only problem is that sometimes when you lift your arms, the water runs down into your raincoat. Though it was kind of fun to paddle in the rain, it kind of made me feel like I’ve been put through the test. Yesterday it was beaver dams, this morning it was lining the kayak and walking down the river, which is very slow, and the rain storm. Everything got pretty damp.

After Denny left, I decided I was going to paddle another 10 miles and get out at the edge of Eagle River. I got back on the river and came into Eagle River and the sun came out and it was just beautiful. It’s a nice stretch from River Road into Eagle River, even though there’s a lot of downfall that you’re always zigzagging around to get through. You could really tell an outfitter had been working on that part of the river, especially Rohr’s Wilderness Tours outfitter, which is partway up the river. They have a beautiful stretch, you could tell they had worked to keep the river open. When a tree would fall, they’d cut it so you could get through. That was really nice and people have been out there making it passable for canoes.

Tonight is Monday night and I’m staying in Eagle River with my River Angels Bryan Pierce and Gail Pierce. They just gave me an incredible dinner of homemade spaghetti sauce and incredible meatballs the size of an apple, pasta, bread and really yummy salad. So I’m very content right now, even though it was a hard day. I did 22 or 23 miles, but super winding, so my neck and my shoulders are pretty stiff from that. For me that is a pretty long day.

With that I think I’ll sign off. I hope everybody is enjoying reading the blog!