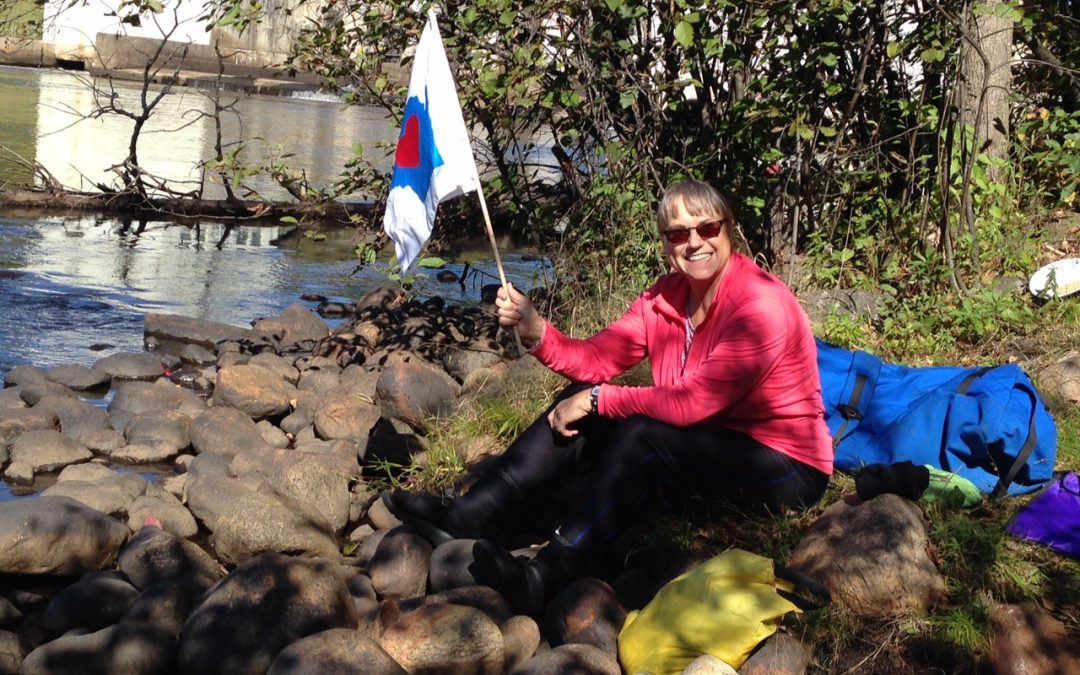 Listen to Ruth tell the story of Day VI:

This was a really special day, and I want to thank the people who paddled with me today because that’s what made it incredible. One thing I’ve noticed about this whole trip so far—I’ve been out since Sunday and today is Friday—is that I’m living totally in the present. There’s only a couple of minutes during the day when I have to think about what’s going to happen tomorrow or what happened yesterday. It’s a really incredible and relaxing feeling and way to live life. Of course we can’t all do that. We have to put up food for winter, we have to work a job and so on, but I hope that everyone at some point gets to be out in nature free from schedule. It’s really, really satisfying.

I started this morning in Rhinelander, had an interesting TV interview with Channel 12, thanks to reporter Katie Thoresen. Later, from the river, I had a phone interview with WXPR community radio station in Rhinelander. Most of you who live up north probably tune into it for your local news and also some great music. I got to paddle with Marcia Obukowicz, who is a Natural Resources of Wisconsin member, and Tom Jerow, who is also a member and a retired Department of Natural Resources water resource specialist.

I enjoyed listening to Marcia tell me about how her experiences with the Foundation field trips opened up a whole new world of things to study and learn about and help with. Marcia’s an incredible volunteer resource and she has helped so many worthy causes in the natural resources field. She’s a citizen scientist, which means she helps study different populations of animals or plants, or takes water-quality  tests and then reports that data into a system that helps our state learn more about populations, or the health of an ecosystem. For example, she told me that she had met Dave Redell, who worked at the Department of Natural Resources as the bat researcher. He headed up a 10-year bat conservation plan and established a Wisconsin bat conservation endowment fund that is managed by the Foundation. Through meeting him on a field trip and learning about bats, Marcia became interested and helped do some of the population counts for bats.

She is also currently working with the Wisconsin Breeding Bird Atlas, which is our second atlas in Wisconsin to inventory what bird species are breeding in the state. Since it was first done 28 years ago, the bird species populations have actually changed, possibly because of changing climate. There are bird species now found breeding in Wisconsin that were not before. Pelicans and red-headed woodpeckers are two examples. One of the important things that Marcia does as a citizen scientist is, in the area where she has a cabin, she knows all the neighbors and can get permission from them so that she and others can go out and do a survey of birds every couple of weeks during the breeding season, and then make their reports. Most of the land in Wisconsin and 86 percent or so of that land is privately owned. So in order to make a good breeding bird survey, you need to get permission from the landowners. Marcia has also volunteered at wildlife rehab centers and many other conservation causes. It was really inspiring to paddle with her and learn from her and what she does as an individual for natural resources. Of course that’s the whole point of the I Heart Wisconsin: River Trip. To showcase the many ways that people get involved.

Paddling with me a different part of the day were retired Department of Natural Resources employees. And what a legacy! These are dedicated employees of the state who spent their whole career, decades, protecting our natural resources. This morning, I got to paddle with Tom Jerow, who was my River Angel along with Steve. They gave me a wonderful dinner last night of Lake Superior whitefish, homegrown potatoes, and a salad that was so delicious. I may have already commented that I had an incredible soaking bubble bath in a tub overlooking the Wisconsin River. I didn’t go that far away from the river, but I tell you it took me away. It was a wonderful evening with good friends.

And I loved paddling with Tom this morning. He has spent decades, his whole career, working to protect water in Wisconsin. Water is what we’re all about in this state. Our rivers, our lakes, our drinking water, our wetlands are an important part of the health of our state. This afternoon, I arrived at Hat Rapids Dam. I was met by a team of three most gracious people: Scott and Susan Watson, and Neal, who are also retired Department of Natural Resources employees. They helped me over the portage and then we had a wonderful time this afternoon paddling through Hat Rapids.

If I had paddled alone, I would have been frustrated, I would have been hung up on rocks, I would have been walking my boat, I would not have had a very fun afternoon because my boat is still loaded pretty heavy. I don’t really enjoy white water that much, but paddling today with Scott and Susan and Neal was really fun because I could follow their track through the rapids, and these are riffles, but they still make me a little bit nervous. And then there were a few boulder gardens, where you try to weave through the big glacial erratics that are there.  They helped me when I got hung up. I would follow Scott and Susan’s route. They were always scouting for the deepest water, which is really helpful in my boat, which is dragging so low. Then Neal was sweeping behind. When I would get stuck, once in a while he would sweep by in his smaller maneuverable kayak and help get me off a rock or give me a little push off to get around something. It really made a huge difference.

Susan shared with me how the Wisconsin river in the 1970’s, especially where we were around Hat Rapid Dam, was a place where human  waste and paper mill—pulp mill—waste accumulated  on top of the river and it was just a foam. Nobody lived on the river, it was disgusting. And then thanks to the Clean Water Act, thanks to the work of people like Susan, the Wisconsin River is much, much cleaner than it was just 40 years ago.

We arrived at Whirlpool Rapids for lunch. You can shoot the rapids or you can portage. The crew helped me portage, which I much appreciated. It’s one of the natural portages on the river, unlike the dams, where the portage may be a gravel road, dirt road or sidewalk. This portage was through the woods on an island with glacial erratic rocks scattered around. It would have been very tough—it wouldn’t have worked very well putting my kayak on the cart I have. That really saved me probably an hour, getting help from my paddling partners.

Then I had the joy of watching them scout the Whirlpool Rapids and talk about whether they were going to go right, whether they were going to go left, how they were going to get around this boulder at the bottom. They explained to me that Whirlpool Rapids is a bunch of water that comes over these boulders and then aims you right toward this big rock at the bottom. That’s the fun part and the challenging part. I got to watch them both–the double canoe that Scott and Susan were in and then Neal came in his river kayak. It was really fun to see them ride on the rapids and the hoops and hollers at the end. These are people who really enjoy the thrill that nature provides, and the challenge of travelling by water.