Day XV: Going with the FLOW, and cranes galore 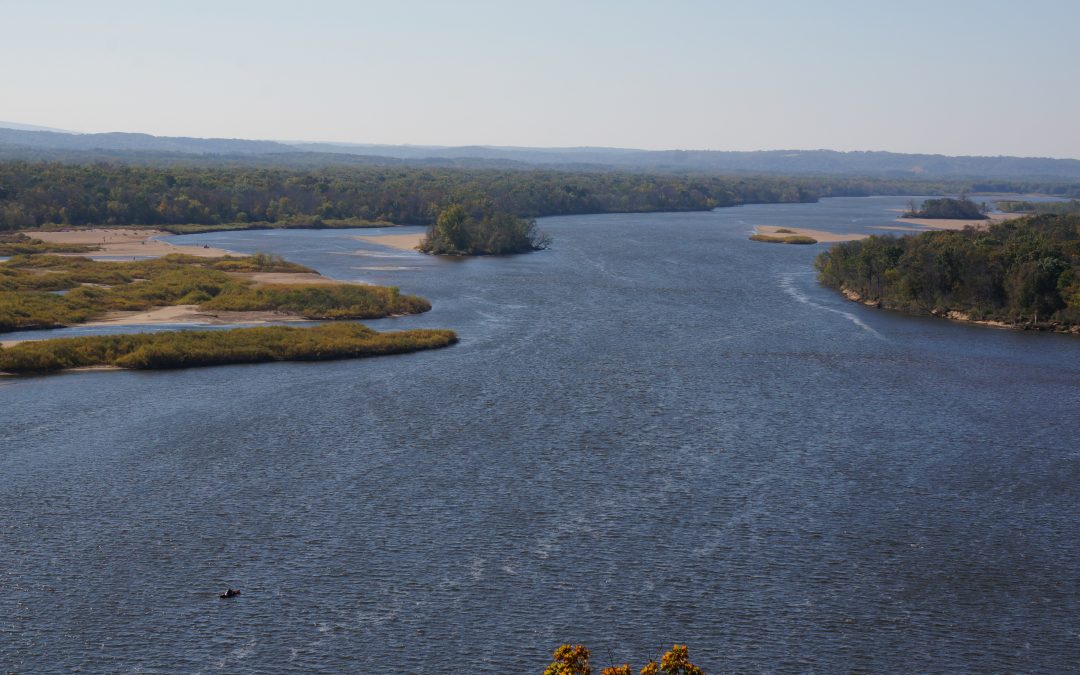 Listen to Ruth tell the story of Day XV:

This is the blog post for Sunday, Oct. 11, day 15. This morning started with a welcome by Timm Zumm of the Friends of the Lower Wisconsin, FLOW. Their motto is “go with the flow.” Timm came to the boat landing in Prairie du Sac and spent the day with me. He was a really great guide to the river and helped me get around some places, which I’ll tell you about in a few minutes. I started paddling and Timm had his motorboat with a trolling motor and kind of went alongside and we went over just south of Prairie du Sac, Sauk City, and looked at an outlet pipe, which actually comes from several miles away from three lakes, Mud Lake, Crystal Lake and Fish Lake, which are spring-fed, but have some development around them. They have to pump water out of their lake when they get too much rain and so on and that outflow goes into the Wisconsin River. It turns out that outflow has pretty bad water quality and has been creating a plume into the river. It’s sort of an ongoing problem and it’s sort of a good example of how FLOW can help provide some advice and information about maybe what can be done in this case. For example, Bill, who came with us from FLOW, mentioned that the town of West Point has actually made a contribution to help with this issue, to fix it, but it still hasn’t been fixed. There’s some work that needs to done on that. FLOW is sort of tracking on that situation and trying to help create awareness about it.

After we looked at that, Timm offered to get me down to Ferry Bluff in time to meet Kim, a reporter from the Sauk paper. He said “well, there’s several ways we can do this,” and he went and he listed a bunch of them and the most obvious one was to throw my boat on top of his boat and we’d motor down there. So I confess, I did not paddle for about maybe six miles down to Ferry Bluff and then he let me off and I paddled into view to get some photos from Ferry Bluff. Barb Barzen took some incredible photos, which were especially interesting because of the wind pattern on the water creating a textured background and then this little red boat down there. So look for those photos when they come in, they’re pretty neat. And then I got to meet Kim Lamoreaux there and talk with her a little bit about the trip and she’ll be writing a story for the paper in Sauk City. I really should get the name of that newspaper.

From Ferry Bluff, Timm and I headed toward the Arena Boat Landing and he shared some things along the way that FLOW has worked on. He kind of re-invigorated FLOW doing river clean-ups. This is not like just picking up litter, he went way beyond that. Friends of the Lower Wisconsin River have helped pull huge amounts of hazardous debris from the river and one example was pieces of a railroad that were blasted out and then just left in the river and they moved them out of the river. Another example is what they think is an underground telegraph wire and also the steel foundations, and that took all kinds of special equipment with long arms hauling the debris out of the water from the mainland and then disposing of it. You just think, what would happen if there wasn’t a group like this? They also, have Lake Delton blew out in 2008 with big rains, they went up and helped clean that up, too, and got rid of the debris that could be very dangerous to people and wildlife.

We continued on down to Arena and met good friends Bill and Lisa Keen, who are Natural Resources Foundation members, and they are very active in the Upper Sugar River Watershed Association and are key leaders in that watershed group, which, with Dane County, has opened up another couple miles of land through the old Bruce Company land on your way on the river toward Paoli. It’s just going to be a wonderful recreational opportunity for people who live in Dane County. I learned a little bit more about the Upper Sugar River Watershed Association by paddling with Bill and Lisa. They have a lot of water monitoring stations and they’ve talked about doing a watershed tour. They’ve done fundraisers, they’ve offered trips down the river for the public and also they’ve led an NRF field trip on the Upper Sugar River. That’s just another example of a local river group that’s doing great work. Bill and Lisa had paddled this stretch from Arena to Spring Green a couple of years ago and they knew that you could sneak down a side channel, which was really excellent because if you read my blog yesterday, I was really overpowered by the wind and the waves on Lake Wisconsin and the river. It was actually the first time ever I had been scared on this trip and I took out a few miles early before I got to Prairie du Sac and luckily there were friends in town who could pick me up.

Anyhow, Bill and Lisa Keen knew about a side channel and we went down this side channel on the south side of the river, the left side as you go down river left, and it was just a wildlife paradise. We saw a deer splashing through the water, just sort of jumping and prancing through the water, and the sparkling droplets were flying up into the sun. We saw wild turkeys standing on the side of this sandy beach, which just seemed so unusual. Eventually when we got closer to them, they finally spooked, but they were super reluctant. They’re not very good fliers so they kind of lifted themselves up into the air and got across to the other side and hung out there. Of course we saw eagles today and that was really fun. We were out on the main river for just a little bit, it wasn’t too bad, and we saw the railroad trestle and right below it was my River Angel, Timm Zumm, waiting for us to come in. Well, actually he was below the car bridge, which was just beyond it. It was really fun when we pulled in just to have someone there to help. He had all my gear, which meant I could paddle a nice light-weight boat and didn’t really have any leaking. It floated nicely down the side channel with only a few times having to pull it. The amazing thing is Timm just chats up everybody he sees at the landing and it turns out we had a Natural Resources Foundation member there going out with a friend of hers for a short little paddle before going to APT. So hello to Amy, it was really great to meet you and hear about the field trips you’ve been on with the Foundation.

We finished the day, Timm, taking me with two FLOW members who live just off Highway 60. They’ve planted an 11 acre prairie that was looking pretty nice. They had some good stuff coming in even though it’s only two or three years old now. They gave us a short tour of a water quality issue that’s happening for them. They cannot drink their tap water. It requires a very, very expensive filter. The reason why is that their tap water had an elevated level of nitrates and that can be very injurious to elderly people and babies. It exceeded the human health level by three times. They’re not the only ones. Other people who have had the resources to have their drinking water tested have discovered nitrates in their water. It’s very evident in the old ox bow pond on their property, which used to be completely clear, and was swimmable, it’s now full of mats of algae, which are created by excess phosphorous and nitrates. It’s not from runoff because their property is buffered on all sides. It seems like by the time you take that information and the drinking water information, it seems that these fertilizers are traveling through the ground water. So they installed four, maybe five groundwater testing wells, which are pipes that go down into the ground, and then once a month, samples are removed and sent to the lab. They’re at different levels. You can test the groundwater at 10 feet or 25 feet or 50 feet and so on. They just started that last year and that record will provide a very good baseline to follow the impacts of their drinking water and what exactly is happening there. It’s possible that this problem with their drinking water could be because of the spreading of animal waste on nearby fields. That whole river valley is just sand, so whatever goes on the fields and isn’t taken up immediately by plants, can be taken down into the water table. That’s part of what they’re trying to learn about. They’re not the only ones with test wells. There are a couple dozen of test wells that are all up and down that area.

Those were the sort of things that the Friends of the Lower Wisconsin are involved with. Some are advocacy, having to do with groundwater quality, or pumping from the Lake Crystal and so on. They also do really serious clean-ups and they try to bring public awareness to some of the issues on the lower Wisconsin River. Last year they did a survey of the users and found out that on an average weekend, there could be two or three people just in the very popular stretch from Sauk City to Spring Green and that’s a lot of people using the river. We saw a lot of people today using it for recreation, fishing especially today, and I heard duck hunters this morning and then we saw a lot more canoers and kayakers, too.

We finished up with a wonderful evening hosted by Barb and Jeb Barzen. Barb is a co-worker of mine at the Natural Resources Foundation and maybe 20-30 people got together. It was fun to see them. We went way up high on a river bluff to watch the cranes come into the sandbars. Every night they congregate on the sandbars for safety and they also do some socialization while they’re there. It’s quite a spectacle of nature. At some point there may be 1,000 or 2,000 cranes. Jeb said they had counted where I was three nights ago at the shack, between 6,000 and 8,000 cranes coming in on those sandbars. So if you have a chance to go down to the lower Wisconsin, I guess it’d be upstream from Spring Green, see if you can see these cranes come in landing on the sandbars. They eventually just fill them up, it’s incredible. They feed during the day on the farm fields and they come in for safety on these sandbars.

Then the group came back for a nice potluck dinner and visiting. It was just wonderful to see some old friends who live in the area and to make some paddling plans for the next couple of days. A lot of stories here on the lower Wisconsin River.