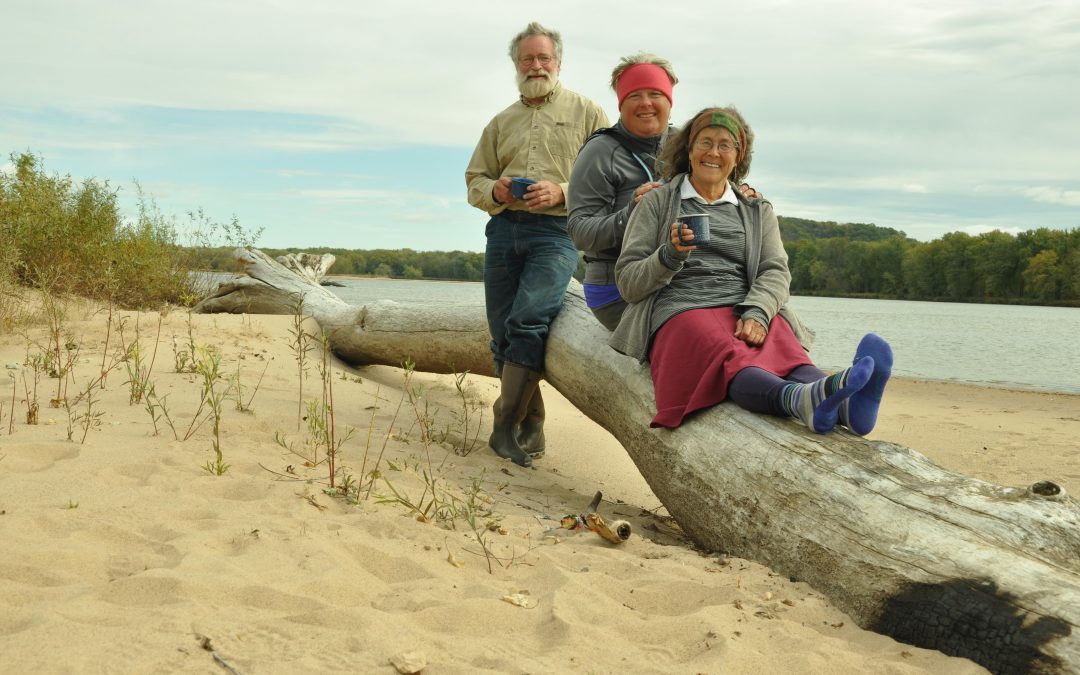 Listen to Ruth tell the story of Day XVII:

Today I traveled from Muscoda Village campground down to the Wauzeka wildlife area. It’s— what I think is—my longest day on the river at about 25 or 26 miles. I was joined for camping and this morning by Mike Mossman and Lisa Hartman. And what a lot of fun to travel with these folks! Last night the winds were still blowing until who knows when. When we went to sleep, they were gusting at about 25 miles per hour. Just super windy. But we had a wonderful campfire. And we realized we were going to need to wake up early if we were going to get these miles in—try to get on the river just a little bit earlier. So, I think we paddled with sort of sun, mostly cloudy for most of the day. It ended up being a beautiful evening. And the winds were basically light winds. I never felt like we were battling them because we took side channels here and there. It was great for viewing wildlife.

One of the places we stopped was a Ho-chunk property along the river. We were able to view some of the effigy mounds. All up and down the Wisconsin River are sights of effigy mounds. It makes me want to learn more about these mounds. How did they build them? Who built them? What was the meaning? Why were they there? One thing that I know is true is they are always in a beautiful place with a view of the water.  And one incredible place to view effigy mounds was across the border in Iowa at Effigy Mounds National Park. I think they have 22 or so effigy mounds there. Some are in shapes of animals.

We continued down the river taking side channels here and there. Lisa found an eagle nest.  They saw a red-shouldered hawk. A Cuckoo. Birds of the river floodplain forest. This part of the river changes from sort of this sand bar—wide, flat islands—and towards the end here I am starting to get into the bluff lands.

One of the nice things about traveling with Lisa and Mike is that Mike is a master of kindling a fire no matter where you are. So at lunch we knew we still had another however many miles to go so we wanted to have a nice lunch. We pulled off at a sand bar—basically flat sand and green willows. Mike looked around, spent some time scavenging for dry wood and twig. He kindled the fire behind the shelter of a downed tree trunk and made some soup for lunch and hot water for hot drinks. I think that’s given me an appreciation of having a fire, which I normally don’t do. I guess just because the stove is quicker and easier and everything, but there is so much comfort to a fire.

After we came down about 19 miles, Mike and Lisa took out at the woodman lake landing. We said goodbye. And then I kept going on a little further down the river so I could be closer to our take out.  When I finally found a place to camp, it was getting pretty chilly. The temperatures were around the mid-30s. I had some soup and a celebratory small bottle of merlot—plastic bottle of course!…in the lower Wisconsin river, glass is prohibited—and a cup of hot cocoa. And I brushed my teeth and went to bed. But my feet were freezing! And I thought, oh yeah somebody told me this trick about heating up some water, putting it in a water bottle and sticking it in the bottom of your sleeping bag. So, I did that.  This was at midnight because I couldn’t get to sleep. I put it in the bottom of my sleeping bag and it warmed up my feet.  And then I woke up again and I was cold. I thought wasn’t this different from before?  And then I remembered: I needed to put my socks back on! Amazingly, that made the difference. I just heated up, went to sleep, and had a great night’s sleep.  But the reason why I had to do all that stuff was because I was cold when I went to bed. If you have a campfire, you’re nice and warm—you can warm up your feet and then crawl into your sleeping bed. Anyhow, I enjoyed campfires both nights when I camped with Mike & Lisa and it really adds a lot to the trip. I think I am going to be thinking about having campfires and learning how to kindle a fire from tiny, tiny twigs. Mike doesn’t even use paper! And he uses one match. Awesome.

It was really the most beautiful way to have a last day…well, I feel like it’s the last day because tomorrow the 14th I am going to meet everybody at Bridgeport Bridge. So, I feel like today was the last day that I was kind of on the trip alone or just with a few people.  It was just perfect.