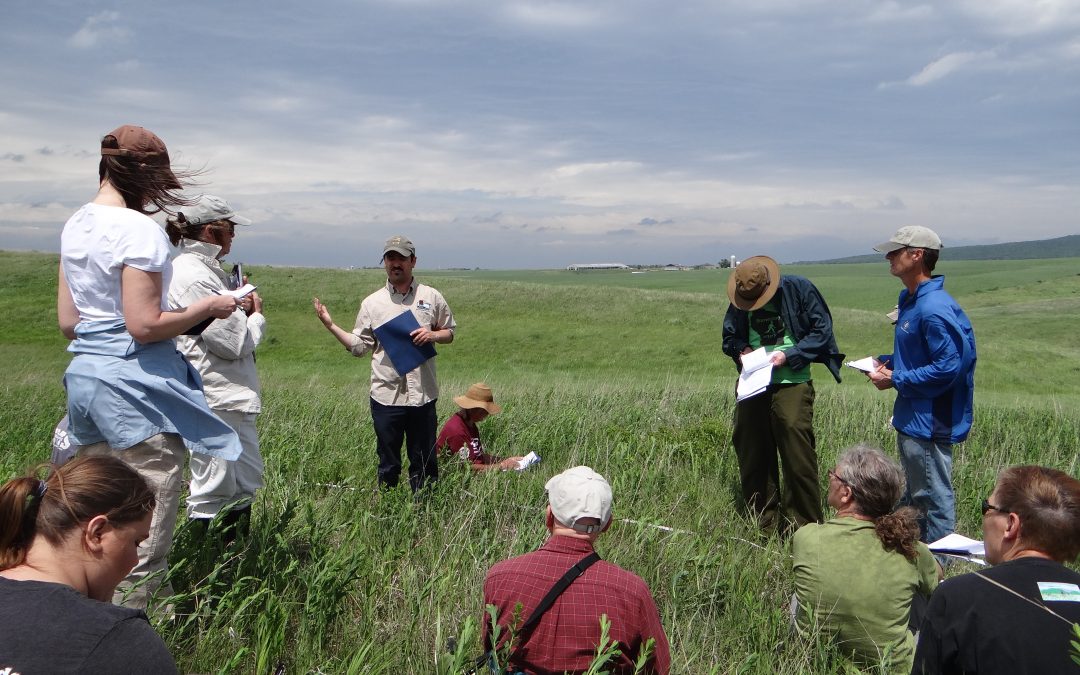 My husband and I settled onto a camping pad on a hill overlooking a pond and waited in the dark. Armed with binoculars, hot coffee and a clipboard, we were ready for the start of our second stint as participants in the Annual Midwest Crane Count.

Our task was to count and record the sandhill cranes we saw or heard in the early morning hours at a rural site in Waunakee.

Our previous stint as counters had been a bit of a bust – nary a crane to be seen nor heard – and we quickly learned that our boots weren’t up to picking our way around Waunakee Marsh State Wildlife Area in the dark in mid-April.

But this year, as the sun started rising, suffusing the corn-stubbled fields around us with a rosy pink, we knew this time and this site would be different.

The pond below us started coming alive with the twittering and wake-up calls of a prehistoric bird. And then we saw the silhouettes of what looked like flamingos. Not just a handful, like the preening beauties I was familiar with at the Henry Vilas Zoo in Madison, but dozens. All standing on one leg.

And then, like a chorus line of leggy dancers, the birds began to move and separate, as if on cue. We started to count.

In all, we counted 60 cranes. It was the second highest total in Dane County that year.

It was an unforgettable introduction to citizen science, a new name for an ancient tradition of citizens observing and recording the natural phenomena around them. The Badger State has a long and storied history of citizen science and is a leader in expanding such scientific inquiry in the 21st century, a story told in “Citizen Science in Wisconsin” in the Fall 2014 issue of Wisconsin People & Ideas.

“Citizen scientists provide high-quality data that has helped monitor populations of birds and butterflies, tracked water quality and located species all over our state that we never would have known about otherwise,” says Ruth Oppedahl, executive director of the Natural Resources Foundation of Wisconsin. “Their data has helped inform important decisions on habitat work and conservation projects.”

More than 2,500 volunteers in Wisconsin and five other Midwestern states participate every year in the crane count, according to Anne Lacy, who coordinates crane research for the International Crane Foundation in Baraboo.

Data collected by the volunteers enables ICF to see how the sandhill crane population is growing and changing in Wisconsin and elsewhere and monitor the potential for crop damage that cranes can cause. Now, with counters entering their data using eBird, the web-based bird reporting platform run by the Cornell Lab of Ornithology, the information is available to scientists and bird-watchers worldwide and is even more valuable in answering local, regional and global questions.

In an era of science skepticism and shrinking budgets, “citizen science is an invaluable contribution to the very basic monitoring that forms the basis for the more formal scientific research that is necessary,” Lacy says. “For the International Crane Foundation, knowing that we have a legion of interested, inspired, folks out there adding to our knowledge of sandhill crane distribution is priceless.”

Volunteers get involved for a variety of reasons – love of the outdoors, love of cranes, family time, tradition, she says. “I think it is the feeling of contribution to something bigger that really drives people to this type of activity.”

I’ve never thought much about why I got involved in the crane count. What I do know is that my experience – now more than a decade ago, before the birth of our son reordered our days – is etched in my mind. Even as so many other details seem to fall away, I know those magical moments will be with me forever.

How to get involved

And unlike in those earlier centuries, when nature observation was often the purview of noblemen, citizen science is an egalitarian pursuit. Everyone who wants to engage the scientific method and embrace nature can apply. Training and equipment are supplied; you bring the enthusiasm.

Here’s just a tiny sampling of some of the citizen science projects you can plug into in coming weeks and months:

Wisconsin’s frog and toad survey, one of the longest-running surveys of its kind in the country, gets underway this month. Spend one to three hours for one night each in early spring, late spring and summer, listening for frog calls and recording which species you hear. Contact WFTS@wisconsin.gov if you are interested in volunteering.

Learn to bird watch in a whole new way and help guide bird conservation efforts for the next generation by participating in a comprehensive bird survey, Wisconsin Breeding Bird Atlas II. Replicating a survey conducted 20 years ago, volunteers carefully observe and report breeding bird activities in their area, ranging from singing males, to courtship, to raising young. Go to wsobirds.org/atlas to learn more.

Butterfly enthusiasts are needed to conduct Karner blue butterfly surveys in the range of this federally endangered species as they fly from Wisconsin in successive waves from late May through August. Trainings are set in June; for details contact Joan Voigt mailto:Joan.Voigt@Wisconsin.gov or (920) 622-3591, Ext 209.

Love plants? The Wisconsin Rare Plant Monitoring Program is training volunteers on May 2 at Governor Nelson State Park in Madison and May 16 at Hartman Creek State Park near Waupaca to look for rare plants. Learn surveying techniques and how to accurately estimate large plant populations, use a GPS unit, and assess habitat condition.   To register for a training or to learn more contact Kevin Doyle at 608 267-9788 or mailto:kevinf.doyle@wisconsin.gov

Volunteer to monitor summer bat roosts May through July by counting bats as they emerge at dusk. Or, volunteer to drive, walk or kayak along set routes to “listen” for bats using acoustic monitoring equipment. Please contact the Wisconsin Bat Program at DNRbats@wisconsin.gov or 608-266-5216 if you are interested in either opportunity.

Finally, help turtles cross the road safely by volunteering for the Wisconsin Turtle Conservation Program, which enlists citizens to help report species’ statewide and to document roads that are particularly deadly for turtles as they cross to breeding grounds. Go to http://wiatri.net/inventory/WIturtles/ to learn more.

Find more opportunities near you by checking out the website for the Citizen-based Monitoring Network of Wisconsin, a loose collection of nearly 200 organizations and nature centers that engage in citizen science. Look for activities by county, subject, or by organization.

Or try the DNR Volunteer webpage, where you’ll find a gateway to citizen science opportunities by a variety of agency programs.