The Ghosts of Quincy Bluff and Wetlands State Natural Area 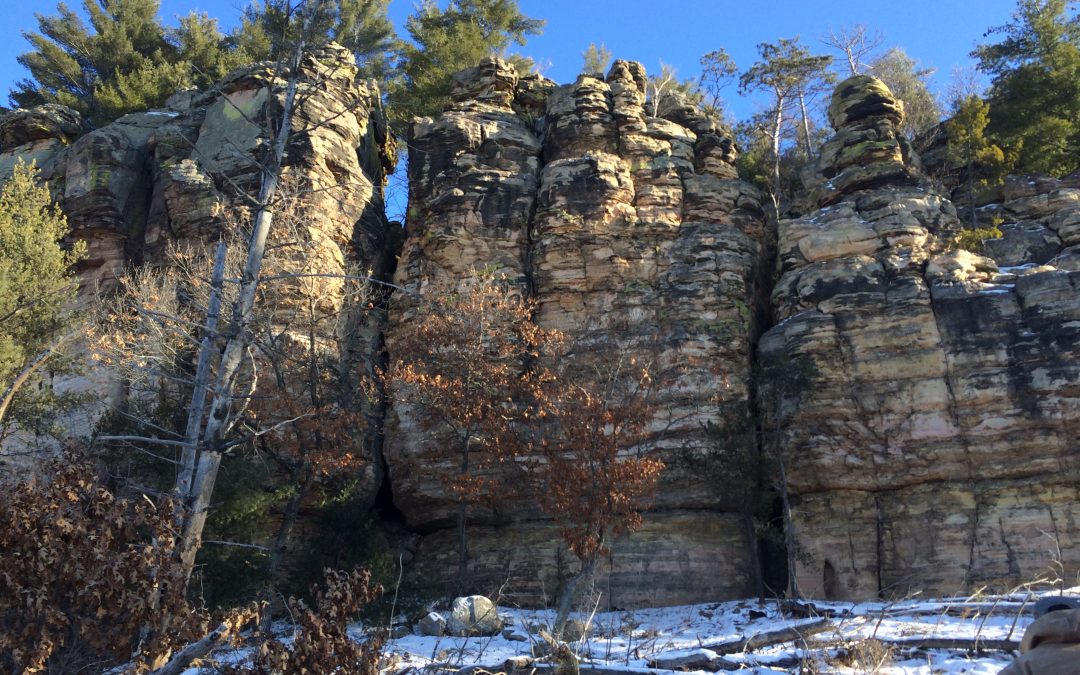 Quincy Bluff and Wetlands State Natural Area is haunted by ghosts. That was my impression even before I first visited the 6,600-acre state property. The afternoon before my trip, I had spoken to Stan Temple, professor emeritus of environmental studies at the University of Wisconsin-Madison, and he told me about the gruesome scene that played out at Quincy Bluff in 1871:

“That year a major portion of all the passenger pigeons in the world nested in central Wisconsin,” he had explained. “Quincy Bluff is pretty much in the center of the 850-square mile area that most of the pigeons nested in. Hundreds of millions of pigeons nested in that area. But close to 100,000 people descended on these pigeons and killed tens of millions of them. It was one of the worst slaughters of passenger pigeons ever recorded.”

When I met up at the state-owned site with DNR Conservation Biologist Jon Robaidek and DNR Wildlife Biologist Darren Ladwig—who had both generously agreed to give me a tour of the State Natural Area—I had a vivid image engraved on my mind, one of oak tree branches bending to the breaking point under the weight of all of the passenger pigeons roosting there. Throughout the course of my 2.5-hour tour that day, the ghosts of those now-extinct passenger pigeons were joined by other phantoms, good and bad, that have, over the years, shaped this very special place.

Ghosts of glaciers past

Jon doesn’t hesitate one bit when I ask him which State Natural Area is his favorite. Quincy Bluff and Wetlands, he affirms, emphasizing the word “wetlands,” which people usually forget when talking about the SNA. Jon has worked for the Wisconsin Department of Natural Resources for more than 20 years in the Central Sands region, the last seven years of which he’s worked on Quincy Bluff and Wetlands. We’re in a truck, heat blasting, slipping and sliding our way along the 5-mile icy snowmobile trail that winds through the State Natural Area. Jon points out the property’s unique natural features. He’s not in any way boastful about what DNR has accomplished since establishing the SNA in 1993, but it is clear that he’s proud to be a part of the property’s complex management.

And how could it not be complex? DNR’s website lists the “mosaic of communities” that make up Quincy Bluff, including northern wet and wet-mesic forest, northern and southern sedge meadow, shrub-carr, pine barrens, and sand prairie. Jon explains that barrens are big open areas with grassy understories and, in this case, oak or pine forest covers. The SNA straddles the northernmost range of Wisconsin’s oak barrens and the southernmost range of Wisconsin’s pine barrens, making Quincy Bluff an amalgam of the two. A once-private fishery on the east side of the State Natural Area is now a human-made wetland complex inside the borders of the SNA. The SNA gets its namesake from another type of habitat: you guessed it, a bluff, specifically Quincy Bluff, which is one of the SNA’s three large land formations that Jon points out as we get out of the truck and brave the subzero temperature.

Jon points to the two-mile long Quincy Bluff on the left side of us, then to Lone Rock, a rock outcrop looming to the right of us and blocking our view of the third land formation, Rattlesnake Mound. It was atop Quincy Bluff that two hunters from Chicago in 1871 were reportedly scared off by millions of passenger pigeons coming over the side of the bluff at dawn one morning. But the real formative history of Quincy Bluff dates back to the time when the Central Sand Plains sat in the bed of extinct Glacial Lake Wisconsin.

“Quincy Bluff and Wetlands’ three larger formations would have been islands in the sandy soils in the bed of the glacial lakes,” Jon tells me. “They’re tough to erode, so they stood out, leaving Quincy Bluff, Rattlesnake Mound and Lone Rock. Otherwise the natural area is really just flat.”

I consider this as we walk up to the side of Lone Rock, thinking about the slow glacial specter that carefully or recklessly (depending on your perspective) carved the land we’re standing on today. It’s too icy to climb the trail up to the top of Lone Rock, though I understand that the view from there is stunning. The snow also thwarted any attempts to hike the trails that, until 2013, belonged to The Nature Conservancy and lead up to the peak of Quincy Bluff. Temple had told me that from that vista, it’s hard to see any real signs of people, unless you really strain to look for it. Though I wasn’t able to experience that from up high, I feel that same welcome isolation as we continued our tour through the rest of the property.

Quincy Bluff and Wetlands is one of the State Natural Areas that the Foundation, in coordination with the DNR, has identified as having the greatest need of additional support. Unlike many other State Natural Areas, which are managed by the Bureau of Natural Heritage Conservation, Quincy Bluff is so large and complex that both NHC and the DNR’s Bureau of Wildlife Management have management purview here. Jon explains that the goal is to acquire enough land to extend the SNA to 10,500 acres. The acquisition of the 800-acre Quincy Bluff Fisheries in 2010 and 1,780-acre acquisition of TNC’s property in 2013 have helped, but they also increase management needs. TNC’s property alone will be managed for both oak and pine barrens and old growth forest. In 2014, the Wisconsin Chapter of the Nature Conservancy worked with NRF to create the Quincy Bluff and Wetlands Endowment Fund, which provides perpetual support toward the Wisconsin Department of Natural Resources’ management of Quincy Bluff and Wetlands.

Even a small parcel of land set aside as a natural area requires tremendous effort as humans try to emulate Mother Nature’s natural processes to ensure a healthy ecosystem. In the case of Quincy Bluff and Wetlands State Natural Area, Mother Nature lent a helping hand in 2004, when a tornado came tearing through the property, knocking down trees but never dipping low enough to take any of the nearby houses, Jon explains as we pass Lone Rock and suddenly everything around the truck changes. The tall oak trees are replaced by short grasses that mark the tornado’s path. Compared to the slow change of glacial movement, the tornado altered the landscape at near light speed. I can track the movement of the tornado from Quincy Bluff all the way to the land before us. But according to Jon, the tornado actually did what DNR had been planning to do—open up the tree cover in some places to restore the barrens.

“When the tornado came through and knocked down all these trees, it kick-started our barrens management program,” Jon says. “The area became an open barrens landscape that once would have had a natural fire regime. Now it relies on our prescribed burns to keep it open.”

Prescribed burns, however, are complicated enough under normal circumstances, but require a special degree of precaution in part because of what makes Quincy Bluff and Wetlands so unique—that combination of oak barrens from the south and pine barrens from the north. Both respond differently to fire and require unique fire prescriptions. There’s also a high fire danger in the area, Jon says, and as an example explains that in 2006 a campfire atop Lone Rock crept down the cliffside through the cracks in the sandstone, alighting the trees below. In a complex system like this, controlled fires encourage warm-season grasses in the barrens and open the old-growth canopy.

Controlled fires are only one small part of the property’s overall management plan, however. Jon shows us another area that has been harvested for additional barrens development. When we reach the wetlands complex on the northeast side of the property, cattail overruns part of it and Jon mentions wanting to somehow push that back, while managing the hydrology of the humanmade complex. He also points out an area of forest where he’d like to encourage old growth management. With all of these demands, I ask Jon how many people help with management. Even for Jon, Quincy Bluff and Wetlands is one of 18 State Natural Areas in his management portfolio. When it is all said and done, there are two to four DNR staff who do much of the regular management work on the property. Anywhere between five and eight DNR staff work on larger projects, such as timber sales and the resultant barrens development, Jon says.

Jon stops the truck suddenly, though all I can see around us are the trees down in a pile for timber harvest. While I’m looking up and out, Darren and Jon crouch low to the ground, pointing out an area of snow that’s been disturbed down to the soil. Signs of coyotes, they tell me, and recent. It’s breeding season and that means lots of digging. Jon points out some of the paw prints, too, which are much larger than those he had pointed out earlier from a jumping mouse, its tail leaving an imprint between two little dots in the snow. Though I spotted a blue jay and a few chickadees in the flesh, the tracks left behind in the snow are the best evidence that we are surrounded by life. Darren had also earlier pointed out muskrat houses in the wetlands, these indistinct white nobs off in the distance. Bear, wolf, deer, fisher otter and even the occasional bobcat will also leave their calling cards, Jon says. Then we notice another set of tracks entirely.

“You see there’s some tracks here,” Jon says. “A person took a walk recently even though it’s been awfully cold. That’s awfully brave of them.”

Cold or not, the reality is that Quincy Bluff and Wetlands State Natural Area is a wonderful place to spend some time during any season. Wildlife sleuths can look for these same clues about which species call the area home and how they go about their day. Cross country skiers can break trails. Hunters and trappers can enjoy their sport. Snowmobilers can enjoy the 5-mile path through the property and hikers can climb up Lone Rock or up to the top of Quincy Bluff. Birders can spot ducks, sandhill cranes and eagles in the warmer months and pileated woodpeckers, blue jays and chickadees all year round. And when I mention my love of amphibians and reptiles, both Jon and Darren are quick to tell me that in the spring the wetlands turn into a big chorus of frogs and the barrens habitat attract slender glass lizards. I take note and start planning my spring return.

On my drive back to Madison, I think about my conversation with Stan Temple about the passenger pigeons. Their ghosts, it turns out, didn’t haunt me, at least not through the entire 2-hour tour. Instead, the passenger pigeons, the glacial formations, the tornado’s aftermath and even the tracks recently left behind by the animals that call Quincy Bluff home added up to something greater.

These are the ghosts that shape the stories of our land and that give us clues about our own history.

These are the spirits that preserve for us Wisconsin’s special natural heritage.

These are Mother Nature’s legacies, gifts for us all to enjoy.