Hunters of the sky and the human connection 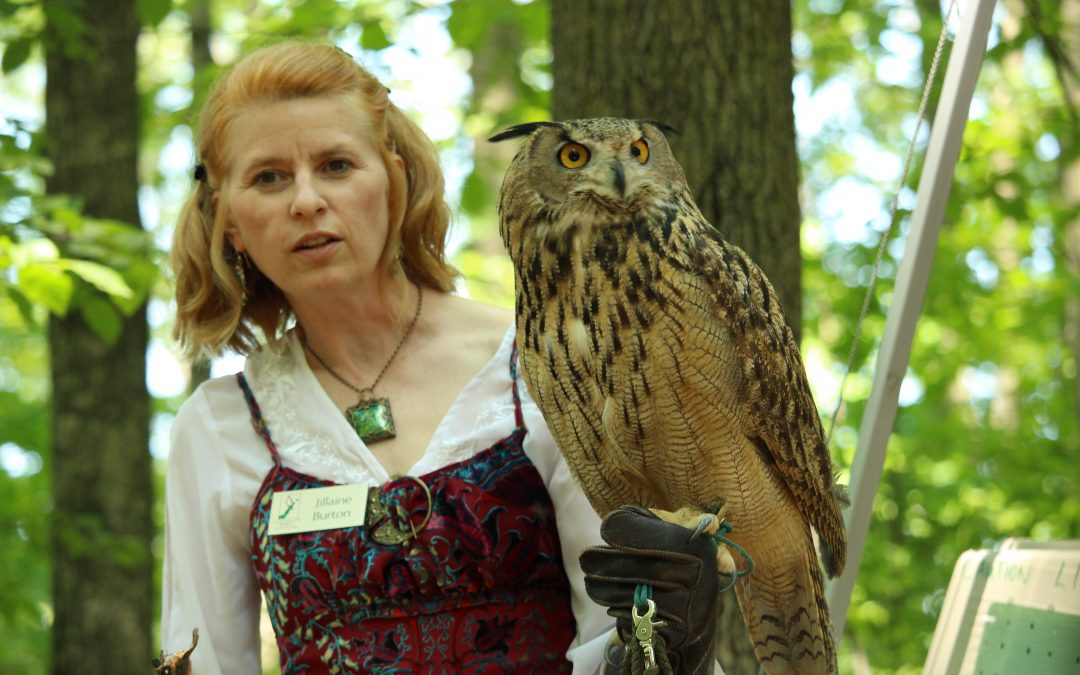 Hunters of the Sky. What does that make you think of? Fighter planes? Pterodactyls? Drones? How about raptors or birds of prey? At the Open Door Sanctuary, we currently care for 11 raptors, all non-releasable for one reason or another, but still quite majestic in their own right. About 20 years ago when I first began to realize I had an affinity for nature, I used to watch the trees for sign of the hawks and owls. My fascination is rooted in the same awe and reverence that indigenous peoples showed for these birds, not only naming them prophets of their gods or bearers of wisdom, but also creating a bond with them to utilize their almost perfect hunting skills.

Our native raptors and our native (human) hunters have a few things in common. Maybe we have even learned something from the birds. We feature red-tail hawks, great horned owls and barred owls at Open Door Bird Sanctuary in Jacksonport, Door County. These birds rely on powerful feet and razor sharp talons to catch and/or kill their prey. The hawk, however, relies on speed, while the owl relies on surprise. Our native Wisconsin hunter relies, more often than not, on surprise rather than speed. He or she is a diurnal hunter like the hawk but can take his or her prey at first and last light like our great horned owl might. The barred owl, on the other hand, is generally nocturnal—with exceptions—and either bird may strike during the day, much like the most dedicated Wisconsin hunter. Our hunter will look to a bow and arrow or a gun to catch his prey, though. Both are symbols of power and precision hunting and both are tools we have adapted to help us hunt, unlike the raptor whose tools are part of what they are.

Hawks and owls sport both tree camo and sky camo in the color of their bodies, as well as the undersides of their wings. Our Wisconsin hunter traditionally sports tree or ground camo, but today you can also find snow camo. With the human hunters, awareness of others is important for safety, thus we also have blaze orange. With the raptor hunters, another bird in the area is just as much at risk as the normal prey. The only safety concern is for themselves. Hawks and owls have tremendous eyesight to help them see prey at great distances day or night. The Wisconsin hunter has binoculars and relies on a scope or magnifying glass to see their prey. So far, there seem to be many similarities, but there is one major difference: hearing. Owls have the ability to hear three-dimensionally and up to the length of a football field. Our human hunter falls short here sometimes, mistaking a scampering squirrel for the “30-point buck!”

What we realize from these comparisons is that the hunters of the sky are truly gifted and perfectly adapted for the hunt, and thousands of years ago, man realized that and sought to partner with them through the art of falconry. Through time-honored traditions of careful training, these birds learned to hunt for man and accepted food in return. That tradition continues today for hunting and also for education, showing what amazing behaviors these birds exhibit as part of their natural existence. Thanks to assistance from the Foundation’s C.D. Besadny fund, we at Open Door Bird Sanctuary hope to continue the tradition of education by taking our birds to programs and by eventually opening our sanctuary to the public, bringing these powerful birds up close so we learn that we aren’t so different after all.