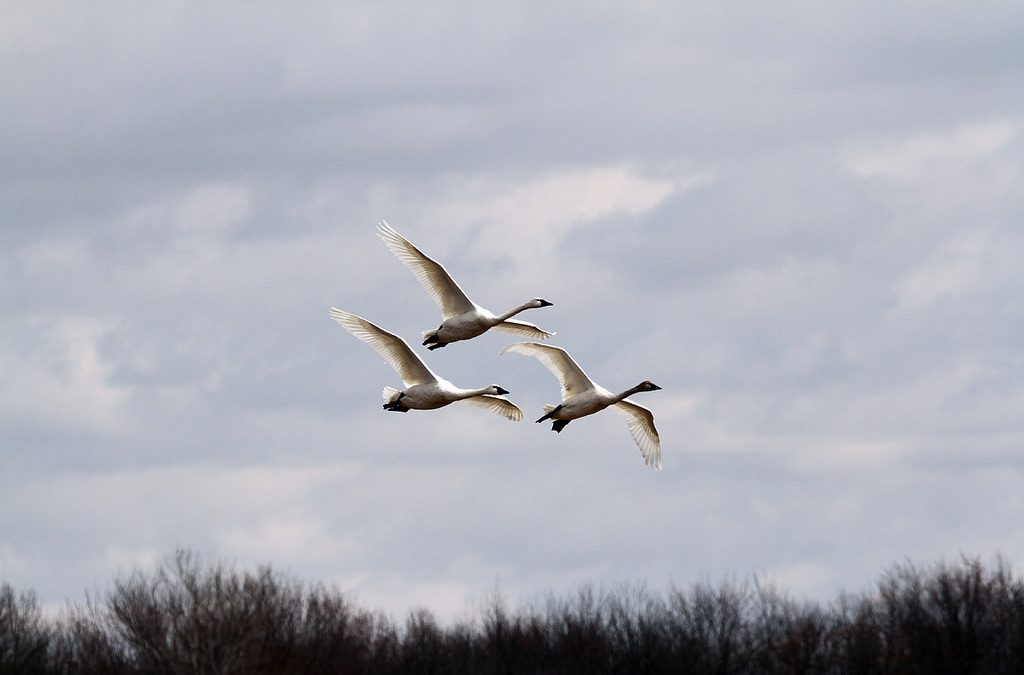 By Connie and Peter Roop, Foundation members and guest bloggers

Each year we try to experience one or more of the more than 150 field trips offered by the Natural Resources Foundation. This November we had the opportunity to enjoy the abundance of waterfowl migrating along the Mississippi Flyway between western Wisconsin and eastern Minnesota and Iowa.   Our sightings included mile-long rafts of canvasbacks (in the tens of thousands), hundreds of green-winged teal and mallard ducks, dozens of eagles, scores of white pelicans, flocks of Canada geese, and hundreds of wondrous tundra swans. And surprisingly, one lonely Pacific loon!

Our first personal encounter with the magnificent tundra swans came this past September on their summer home in the Arctic tundra. We were in the Arctic on an expedition crossing from Greenland to Alaska along the famed Northwest Passage. While we saw numerous mammals, including beluga whales, narwhals, seals, and polar bears, our bird sightings were rare.

We soon realized why.

The Arctic terns, redknots, warblers, redpolls, snow geese, loons, tundra swans and other summer Arctic residents, having already nested and raised their young, had flown south ahead of winter.

But one fortunate morning, while hiking with a naturalist on the real “Frozen Tundra” (apologies to the Packers), we spotted an isolated family of tundra swans: two adults and their two young cygnets. The swans were drifting on a pond, feeding, and preparing to begin their rather late journey south. In the pond were also several other last-minute leavers—three snow geese, two Canada geese, and one lonely Pacific loon.

(Photo by Connie and Peter Roop)

From our Foundation field trip experts, we learned more details about the gorgeous tundra swans. First we enjoyed their crane-like “woo-hoo, woo-hoo” calls echoing across the river pools. Mixed with the quackings of ducks, this shoreline symphony was enthralling.

We watched individual and group behaviors—swans landing with outstretched feet like clumsy aircraft, swans lifting off with splendid grace, swans soaring, swans dipping down, tail feathers high as they feasted on the starchy bulbs of wild celery, arrowhead and pondweed. The Upper Mississippi River Refuge provides the pools of slack water that enables these plants to flourish and nourish millions of birds as they migrate.

We watched swans flap their great white wings almost as if they were greeting their fellow travelers. We gazed at napping swans, their heads snuggly tucked under their wings.

More than 20-45 percent of the eastern population of tundra swans stops over along the Upper Mississippi Refuge to rest and feed. The swans gain more than two pounds of fat before heading east to the Chesapeake Bay where they will overwinter before returning once more to the tundra to build their nests, lay eggs, and raise their young.

Gazing at hundreds of these unique birds, we made the connection between our “Wisconsin” swans and the small family of swans we enjoyed in the Arctic.

Were our swans from the tundra somewhere before us on the Mississippi, we wondered. We take pleasure in thinking we saw the same swan family after having safely made the 2,000-mile trip to Wisconsin.

That’s another story. Or another Natural Resources Foundation field trip!