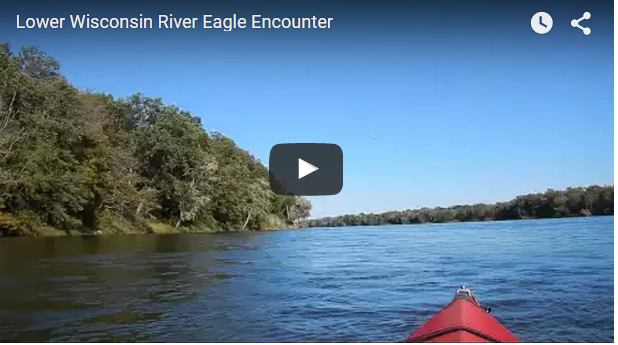 Ahead of my trip, I’ve been out on a few kayaking adventures to test my equipment, make sure all of my supplies will fit in the boat and strengthen my rowing muscles. While out on some of these pre-trip shakedowns, I was greeted by bald eagles, heard the call of the sandhill crane and witnessed the beautiful bluffs of the Upper Dells. I’m looking forward to capturing more of these sounds and sights during the real trip, but here’s what I’ve captured ahead of time!

Upper Dells on the Wisconsin River, just upstream from Upham Woods Outdoor Education Center. This sandstone was deposited during the Cambrian period (2-500 millions years ago) in an ancient sea. The rock formations were exposed when a rush of water scoured the surface and cut narrow canyons when Glacial Lake Wisconsin burst, reforming the landscape in just a few weeks.

The bald eagle population has made a comeback after DDT was banned in the United States. The Wisconsin Department of Natural Resources has the longest running survey of eagle populations (since 1972) in North America. In 2014 about 1,300 nest were counted. The Wisconsin River is an important winter roosting site for bald eagles. You can view them every winter near open water at Sauk City and Prairie du Sac, near Muscada, Wisconsin.

One of the spectacles of nature is to watch and listen to sandhill cranes flying in to congregate on the sandy flats of the Wisconsin River in the fall. The cranes are staging for their migration south. The cranes seek the safety of the sandbars that protect them from raccoon and other predators. To see the cranes, quietly sit at dusk as they fly in over your head to stand in the shallow water.

The Upper Dells of the Wisconsin River have several canyons and gulches that are fantastic to explore by boat. Coldwater Canyon is an offshoot from the main river formed by sandstone walls left by ancient Cambrian seas. The walls of the canyon are covered with moss and liverworts. This part of the Dells is protected by a permanent conservation easement that ensures the natural beauty will continue for future generations.