Protecting the state’s wood turtles, one garden at a time 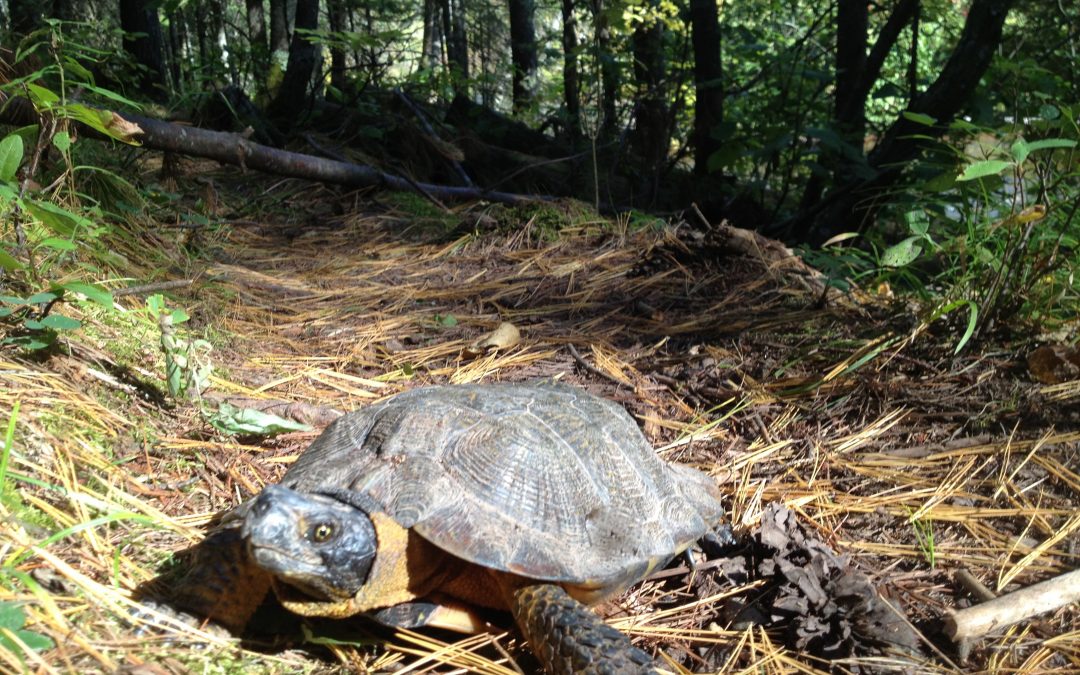 Any day on the Brule River is a good day. What I didn’t realize when I heard the commotion behind me was that this November day was going to become even more special and lead to a fascination with the wood turtle.

Like a buck chasing a doe, the turtles ducked and weaved through the woods along the banks of the river. Surprised by the behavior, I tried to follow them, but had a difficult time since, as their name implies, these agile turtles are as much at home in the woods as they are on the water.

There are 21 species of reptiles–11 of them turtles—that call outdoor Wisconsin home. Traditional thought is all reptiles are quite limited in intelligence, although wood turtles have been documented as being the most intelligent of them all.

Wood turtles have scored high in maze and other reward-associated tests and even shown a reluctance to crawl onto an elevated pane of glass other turtle species didn’t hesitate to move onto. They’ve also learned how to feed on earthworms by stomping or dropping themselves heavily on the ground, causing the vibrations earthworms associate with rainfall that entices them to come to the surface.

While not considered a colony type animal, populations of wood turtles tend to be small and compact. Breeding adults can live to be 40 years old in the wild, and in captivity one reached the ripe old age of 58. Their best reproductive years aren’t until their third or fourth decade of life.

Wood turtles require both aquatic and upland habitats to complete their annual life cycle, which unfortunately includes their dependence on roadsides for nesting. This period of time, usually in June, is when they’re most vulnerable. Female wood turtles are most likely to be killed on roads because they often cross them when looking for prime nesting sites. Natural predation of these sites have also increased in recent decades, mainly because of the growing human population that attracts more raccoons and skunks that thrive in a human-dominated environment.

To help preserve this concentration of turtles, a few years ago Wisconsin DNR Wildlife Biologist Greg Kessler harvested eggs from our garden, a soil type the turtles found desirable, and incubated them until they hatched. Then he released them back into the river. A year later in an effort to be more efficient and effective, he proposed setting up a predator-proof nesting site on our property along the Brule. We readily agreed and by using the funds, energy and time of Turtles for Tomorrow’s current director and retired DNR herpetologist Bob Hay, two nesting sites were established.

One of them required bringing in gravel of the right composition. For the other, we simply fenced off a portion of our garden, including fencing along the sides of it that directed the egg-laying females to the protection of the sanctuary at one end. We’d observed raccoon tracks and pieces of eggshells in the garden in the past, proof to us that predation was a problem.

“The goal of this project is to create and restore nesting sites away from roads to reduce road mortality on adult female wood turtles while boosting nesting success,” Hay said. “Fourteen nesting sites have been created or restored over the last four years and there are plans to construct additional sites in 2015.”

Other than the garden that obviously already had suitable soil, the other nesting sites are made up of gravel with the consistency of a traditional gravel road shoulder turtles are drawn too. Funding for the work comes from several sources including utility companies such as ATC and WE Energies, The Therese Foundation and citizen donations. The WDNR has contributed labor for some sites and the National Forest Service has funded some of the work and equipment for sites on their properties.

After the gravel has been put on the site, a solar-powered electric fence is put around it with a space below the bottom wire tall enough for a turtle to move under, but not a predator such as a raccoon. The top wire, the only one that is electrified, is about 20 inches off the ground and isn’t lethal to predators attempting to crawl over it, but very effective in convincing them there’s better places to look for dinner.

Turtles for Tomorrow – and the “underdogs” they represent – won’t ever raise the funds Pheasants Forever, Ducks Unlimited or Whitetails Unlimited do, but through their work, our outdoor Wisconsin is a better place.