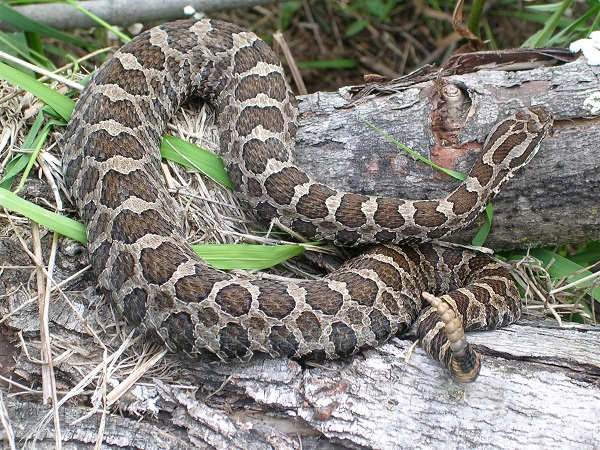 Rattlesnakes, like Wisconsin’s native eastern massasauga (Endangered in Wisconsin and recently added as a federally Threatened species) and timber rattlesnakes, usually get a bad rap in society, and are often portrayed as creepy, deadly pests. But these animals play a critical role in maintaining Wisconsin’s diverse ecosystems.

In Wisconsin’s early history, expansion of settlements called for the draining of much of the marshy wetlands in which the eastern massasauga thrived, leaving this unique species little habitat. In fact, up until 1975, the eastern massasauga was hunted down and killed with the express intent of reducing their numbers. They were viewed as pests who threatened livestock and humans. And in many areas today similar feelings still exist about rattlesnakes and have helped put the eastern massasauga where it is today—listed as Endangered of extinction in Wisconsin and listed federally as Threatened (meaning at risk of becoming an Endangered Species).

Why We Need Snakes

In truth, Wisconsin’s rattlesnakes (and other snakes) do a lot of hard work in maintaining Wisconsin’s wild areas. As a predator, they help control rodent populations that might otherwise damage crops or spread disease. They are also prey, providing other predators like owls, eagles, coyotes, and wolves with a critical source of food. The complex relationships between animals as predator and prey are what keep the wild food chain strong.

At the end of 2016, the eastern massasauga was listed as federally Threatened by the US Fish and Wildlife Service under the Endangered Species Act. This new designation also means that it is likely to become federally Endangered in the future (it has been Endangered in Wisconsin since 1975).

Rich Staffen, a conservation biologist with the Wisconsin Department of Natural Resources, helped us understand what this new status means and how it will impact future snake conservation efforts.

“State endangered species law does not protect species habitat, only the species itself,” Staffen explained. “But federal species law has the ability to designate critical habitat for species.” This means that the new federal Threatened status allows the government as well as conservation organizations like the Natural Resources Foundation of Wisconsin to prioritize work to help the eastern massasauga. This work might include strengthening land management practices that preserve habitat for these snakes. It could also include funding for habitat restoration, population surveys, and research projects on movement, disease, and other possible threats to their shrinking populations.

Hopefully the new federal designation will both increase awareness and lend a sense of urgency to increase conservation efforts so that the eastern massasauga might live in Wisconsin for decades to come.

The Natural Resources Foundation of Wisconsin is helping protect the eastern massasauga rattlesnake and Wisconsin’s other threatened snakes. Learn more and make a donation today to support Wisconsin’s wildlife.