Restoring wild rice for waterfowl in the Mead Wildlife Area 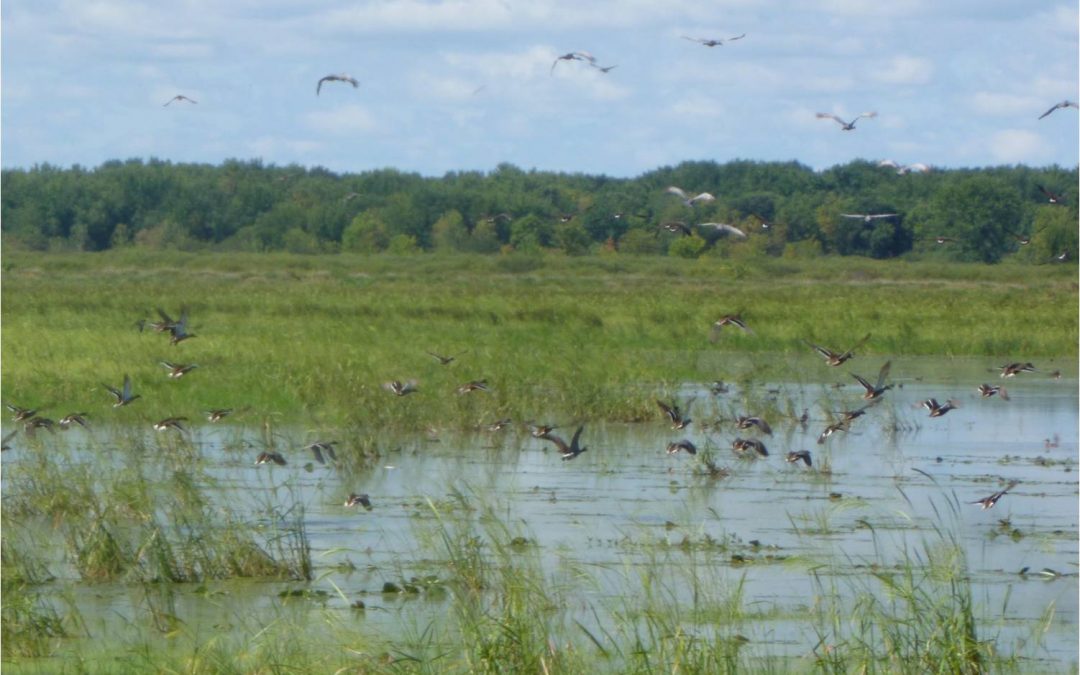 Mallards on Rice Lake Refuge, which was once part of Rice Lake. (Photo courtesy of Patrice Eyers)

By Patrice Eyers, guest blogger from the Wisconsin Department of Natural Resources

As far back as one can imagine, the area that sits between Wausau and Stevens Point along the Little Eau Pleine River, has been cherished for its abundance of natural resources. In pre-settlement times, the Chippewa inhabited Smokey Hill, a forested island in the former Rice Lake. The river and the lowland marshes provided a bounty of white-tail deer, bear, fish, beaver, muskrat, wild-rice, wild asparagus, sugar maple and other wild edibles. These abundant resources were at the center of the historic Battle of Smokey Hill—a battle between the Chippewa and Winnebago tribes, but they were also the foundation of a strong friendship between the French and the Chippewa.

Many things have changed since the days of the Chippewa. The forests have been logged, The river, once the life blood of this area dredged—resembling a straight ditch instead of a river, the land ditched and plowed, and the once bountiful Rice Lake drained. Smokey Hill is no longer an island and the hundreds of thousands of waterfowl that once blackened the skies are a thing of the past. Just more than 60 years ago, it was the site of a proposed reservoir—a lake whose size would only be trumped by Lake Winnebago.

Today, we call this place the Mead Wildlife Area. This property was gifted to the state by Consolidated Water and Paper when the reservoir idea proved less than popular. Beginning in the early 1960s, state wildlife crews began restoring the area, creating an extensive dike system and numerous flowages across the landscape. Today the Mead has grown to more than 33,000 acres. The property consists of approximately 13,000 acres of wetlands, 14,000 acres of forest, and more than 6,000 acres of grasslands.

Many remnants of past plant communities still exist, and throughout the recent past it has been an important goal to not only maintain those remnants from the past, but to encourage the natural, native, historical habitat to flourish. Wild rice is one such community. Within the boundaries of the former Rice Lake, stands of this beneficial community exist.

The Mead provides a very favorable and diverse habitat that is highly desirable for both local and migratory waterfowl, making wild rice a very important resource at Mead. Wild rice is similar to corn in that it provides a great amount of energy needed by migrating waterfowl. It also provides a rich thick cover for local birds during late summer.

The Mead strives to provide habitat needed for waterfowl during the breeding, nesting, brood rearing, and migrating portions of their annual life cycle. Wild rice is one of the components of that habitat, but also includes additional management practices like sharecropping, prescribed burning, established refuge areas, and water-level management.

The ability to manipulate water levels within the flowages is vital to maintaining or establishing wild rice on the property. Water control structures enable wildlife managers to manipulate water levels within the flowage and manually create optimal conditions for rice production. This is also beneficial during late spring when wild rice is in the floating leaf stage.

North Townline Flowage will be the newest site slated for wild rice establishment. With the recent addition of a water control structure and water pumping site, this area seems a natural fit for establishment. A Besadny grant will help to fund the planting of a five-acre plot on the west end of this flowage. With a little luck, the Mead Wildlife Area will continue to hold on to our rich and wonderful history.