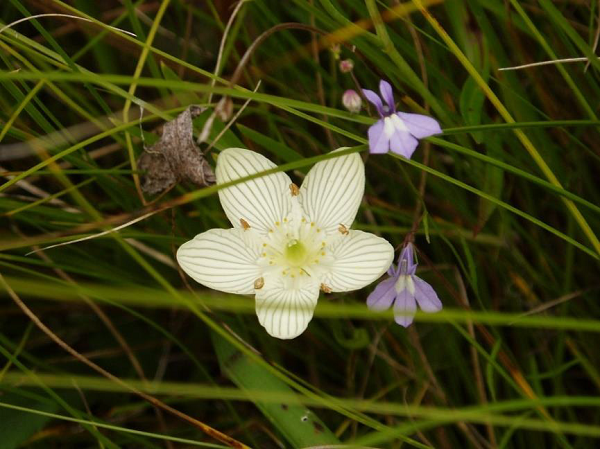 Goldenrods in the wet-mesic prairie at Clover Valley Fen SNA.

Conservation and restoration of our public lands is central to our mission at the Natural Resources Foundation. The Southern Kettle Moraine encompasses several high priority State Natural Areas that are home to multiple rare ecosystems as well as threatened or endangered species. The Natural Resources Foundation partnered with the Brookby Foundation in 2017 to support restoration work in the area. Additional work will be done in 2018 thanks to the first disbursement from the Cherish Wisconsin Outdoors Fund — a permanent endowment fund created to support critical habitat restoration projects.

The projects funded in 2018 through the Cherish Wisconsin Outdoors Fund grant will expand upon work already being done through this 2017 partnership with the Brookby Foundation at Clover Valley Fen and Bluff Creek State Natural Areas (SNAs). The 2017 Brookby Foundation grant also helped fund work at Whitewater Oak Opening (a unit located within the Clifford Messinger State Natural Area).

The $10,000 grant from the Brookby Foundation helped the State Natural Areas field crew accomplish significant restoration work in 2017. The SNA crew consists of a crew leader and four to five experienced and dedicated crew members, who completed work over seven days in March and April 2017. The crew’s work focused on removing brush, preparing fire breaks, and conducting a prescribed burn. In total, this grant resulted in 203 acres of restoration work.

Whitewater Oak Opening is a State Natural Area within the Clifford Messenger Dry Prairie and Savanna Preserve. This property features remnant dry prairies and oak openings and resembles what much of southeastern Wisconsin looked like prior to European settlement. Scattered red, white and burr oaks are set within the dramatic ridges and valleys of the southern Kettle Moraine. Oak openings (sometimes referred to as oak savannas) are classified as a globally imperiled plant community. With funding from this grant, SNA crew members continued ongoing efforts to keep this large oak opening in good health. Over a period of four days, the SNA crew covered a 20-acre area removing large common buckthorn and honeysuckle trees and shrubs. These non-native trees or shrubs outcompete native plants, and even release chemicals into the soil that inhibit the growth of surrounding vegetation. The trees were cut with chainsaws and the stumps then treated with herbicide to prevent re-sprouting. With continued work from the SNA crew as well as local volunteer groups, the goal is to remove all of the large invasive trees in the burn unit. Going forward, prescribed fire will help prevent these invasive woody species from reestablishing. In addition to invasive tree removal, the SNA crew also prepared fire breaks at Whitewater Oak Opening, with the goal of conducting a prescribed burn in the spring of 2018.

Clover Valley Fen State Natural Area protects an increasingly rare example of several high quality calcareous fen mounds. Calcareous fens are unique wetland ecosystems that are characterized by abundant carbonate-enriched groundwater at the surface. In some cases, like is seen at Clover Valley Fen SNA, an accumulation of peat due to groundwater upwelling can raise the fen surface to a height of several meters above the adjoining lands, forming a mound. While these fen mounds may take thousands of years to form, without proper management, they can be overtaken by brush and invasive plants in just a few short years. Over the course of two days, SNA crew members cut dense brush on 2.5 acres of fen mounds at Clover Valley Fen, clearing non-native glossy buckthorn and honeysuckle as well as native red osier dogwood and willow which were aggressively taking over the mounds. The brush was cut with brush-cutters and chainsaws. The stumps of the brush were then treated with an application of herbicide that will kill the roots of the plants and inhibit re-sprouting. The removal of this brush was beneficial in two ways; it removed the seed source of non-native plants, and it opened the area enough that future prescribed fire will be able to carry through, which in turn, will top-kill future brush that starts to become established.

Bluff Creek State Natural Area includes a mix of both wetland and upland plant communities. At this one SNA you can find wet-mesic prairie, additional fen mounds, sedge meadows, marsh, and southern dry-mesic forest, as well as bubbling springs and a cold, fast-flowing stream. Like its neighbors, Clover Valley Fen and Whitewater Oak Opening, Bluff Creek SNA is home to many rare species including false asphodel (Toffieldia glutinosa), slender bog arrow-grass (Triglochin palustris) and tussock bulrush (Scirpus cespitosus). In addition to its significant ecological value, Bluff Creek SNA holds recreational significance. A portion of the Ice Age Trail is located within the SNA, and its cold stream is also a popular trout fishing destination. In late April 2017, with grant funding from the Brookby Foundation, the SNA crew conducted a 181 acre prescribed burn. Prescribed burning is a critical tool to restore and maintain the conditions required by native southern Wisconsin plants. Fire top-kills brush, stimulates native seed germination, discourages invasive plants, and cycles nutrients. Ideal weather conditions on the day of the prescribed burn made it a particular success.