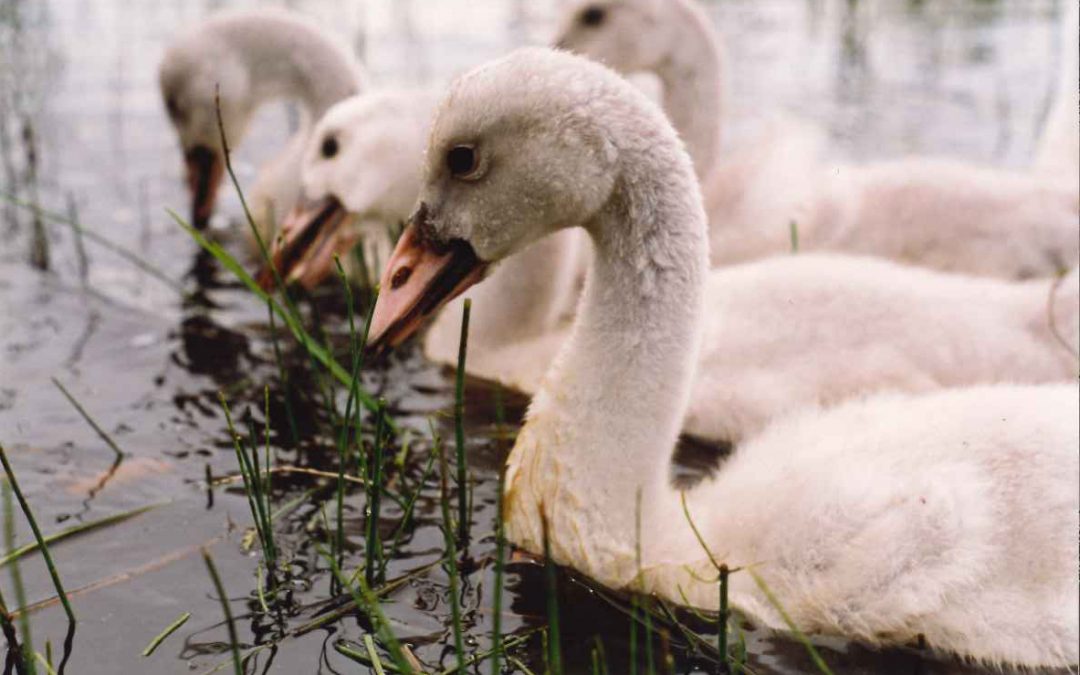 Wisconsin has an astounding number of adult white trumpeter swans. These animals are the largest native waterfowl species in North America, and they’re quite the sight—beautiful white birds that stand five feet tall and weigh up to 35 pounds. As their name suggests, one sure way to know you are around a trumpeter swan is if you hear their loud trumpeter call.

While the species may be thriving now, it has not always been that way. In the late 1880s, market hunting and demand for their beautiful feathers almost brought white trumpeter swans to extinction. Twenty years ago, Wisconsin had a mere 75 individuals. The Wisconsin DNR and other organizations worked relentlessly for years to raise the species up to more than 200 breeding pairs by 2009, at which point it was removed from the state’s endangered species list. By 2010 the population had seemingly taken off, reaching 672 individuals.

However, this was just the beginning of a great comeback story. Sumner Matteson and the Wisconsin Department of Natural Resources have recently conducted studies using aerial transects (surveys done by air over certain geographic areas) to show that the state’s current estimated trumpeter swan population is at an incredible 4,695 individuals.

A Herculean effort for trumpeter swans

Matteson first got involved in the project in the late 1980s. He was originally directed by his then-Nongame Section Chief, Randy Jurewicz, and former Endangered Resources Bureau Director Ron Nicotera to write a trumpeter swan recovery plan. They completed the plan in 1986, and Matteson began coordinating recovery efforts for the state. The Natural Resources Foundation of Wisconsin helped to fund the project, which is today regarded as one of the most successful conservation recovery projects in the state’s history.

Between 1989 and 1997, biologists from Wisconsin, including Matteson, flew to Minto Flats in Alaska, a half-a-million-acre refuge that is the nesting area for the largest group of wild trumpeter swans in North America. There, they collected 385 swan eggs. Matteson says that each egg was four and a half inches long,three inches wide, off-white in color and weighed about a pound.

“The WCC plane was a Cessna Citation 560 twin-engine jet,” Matteson says. “I think we flew at around 35,000 feet. The Citation’s passenger cabin was compact and comfortable–I could touch both sides of the cabin with the wingspan of my arms, but could not stand.”

Matteson also recalls the striking views he was able to catch a glimpse of on the first part of this journey:

“The flight over the Rocky Mountains was spectacular, with its snow-covered peaks, and the trip toward Juneau was equally stunning, as we had clear views of the long, immense tongues of glaciers. In all, the flight to Fairbanks took about nine hours, with our landing in Fairbanks near midnight local time. But this was the land of the midnight sun, so it was twilight when we landed. Landing at Fairbanks, Terry Kohler taxied the Citation jet to a parking area and shut down the engines. All of a sudden three police vehicles arrived on the scene with their sirens blaring and lights flashing. Travelling with us was Joe Johnson, head of Michigan’s Trumpeter Swan Program. He exclaimed: ‘They think we’re drug smugglers!’ As it turned out, the plane was parked in the wrong spot and was pointed in the wrong direction,” says Matteson.

Even after the long flight, there was no rest for the weary.

“The morning of the collection day, I remembered conflicting advice from friends about how big a meal I should eat before going up in an Alaskan bush plane. I chose a small breakfast: one lonely hash brown potato and a glass of orange juice. I promptly lost that within the first 30 minutes of what turned out to be a 13-hour egg-collection trip!” Matteson says.

Although that could be described as a less-than-ideal first day, the researchers were finally doing what they came to do: collecting eggs of a dwindling species. Special precautions had to be taken to ensure the safety of the precious eggs, so the researchers used padded suitcases.

“The timing of the trip was important because we wanted to collect the eggs when they were 20 to 25 days old—an older age when the embryos should travel well and survive the long flight to Milwaukee. But the real concern that gripped our minds was two-fold: not overheating the eggs, but making sure also that they weren’t becoming too cool,” Matteson says.

The vast majority of the eggs the researchers collected hatched at the Milwaukee County Zoo and were placed in two release programs: decoy-rearing and captive-rearing. During 1989 through 1997, the group collected 385 trumpeter swan eggs, of which 356 (93 percent) hatched, an improvement over the wild hatch rate of 60 to 80 percent.

In 1993, NRF members participated in the decoy-rearing program as part of a Foundation field trip.

Many of the researchers experienced doubt from others that the project could succeed. Becky Abel, the UW-Madison graduate student who was in charge of the decoy-rearing program, says she remembers being told that she would be “killing all of those swans” because they wouldn’t migrate without a parent to lead them south.

It wasn’t until the year 2000 that breeding pairs in the wild became well-established–despite the threats of shooting, lead poisoning and power line collisions–and then increased markedly to their present number. Matteson claims the population is now stable (and in fact continuing to grow), so there’s no need to augment the population through additional means.

Matteson describes how conservation strategies have evolved to create such a rise in population number:

“Conservation strategies over time emphasized an increasing educational awareness program to inform hunters about the difference between swans and geese, but the marked increase in statewide numbers mirrored a regional population explosion in trumpeters as they occupied wetland habitats, successfully produced young and completed successful migrations,” says Matteson.

When the swan population finally stabilized, Matteson recalls feeling relieved. “I was absolutely elated and full of gratitude toward the many public and private partners who had taken the risk and put in the time to make the program successful,” Matteson says.

The project has shifted from conservation and recovery strategies to a monitoring phase with statewide aerial surveys every five years now that the population is no longer endangered. These aerial surveys focus on three populations based on where they breed and winter. The Pacific Coast population includes largely Alaskan birds that winter along the coasts of British Columbia and Washington. The Rocky Mountain population is composed of two sub-populations: the Canadian flock of Alberta and northwestern Canada that migrates to Montana, Idaho and Wyoming, and secondly a year-round resident flock of U.S. birds from that same tri-state area. The final population is the interior population, including all restoration-project trumpeters east of the Rocky Mountains.

“The public continues to embrace trumpeters as part of our natural heritage once lost and now restored,” Matteson says.