Listening for Frogs: Volunteers lend an ear for the Frog and Toad Survey 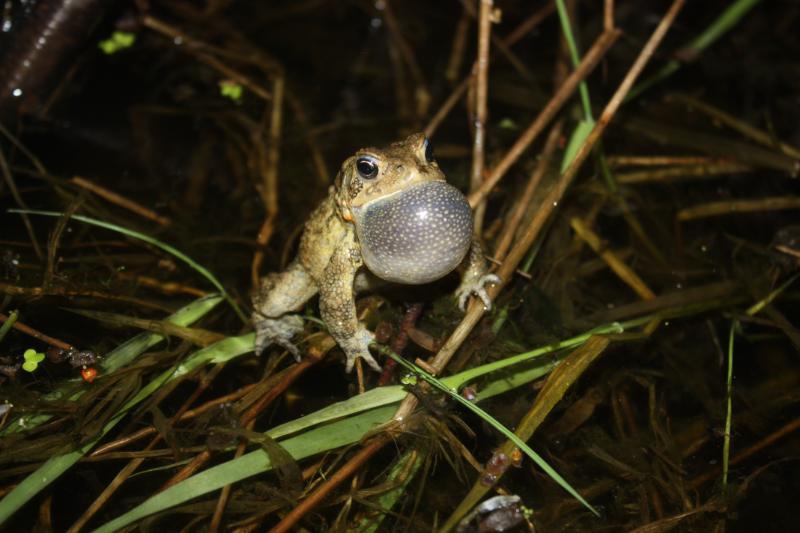 It is a late night in June in Wisconsin’s beautiful Kickapoo Valley and I am straining to hear the calls of frogs around me. It’s not that they’re faint, it’s that there are too many of them, coming from the woods in all directions. I try to remember what a seasoned birder once told me—that picking one species out of the cacophony is a lot like training yourself to hear just the violin section of an orchestra. Do I hear Leopard Frogs? Maybe. Treefrogs? Sure, but is it the Gray or the Cope’s Gray? Chorus Frogs? I think so. I’m trying to identify individual calls for the Wisconsin Frog and Toad survey. I cup my hands around my ears, listening for frogs again.

An American toad calls during the Wisconsin Frog and Toad Survey. (Photo by Art Stevenson)

And then, through the din, comes a call I can’t miss. It sounds like what I imagine is a spaceship landing somewhere nearby and I know I’ve got it: the American Toad. Suddenly they’re everywhere, surrounding me, like space amphibians coming to our planet to tell us Earthlings their stories. I am relieved to finally have gotten one call right and try to commit it to memory.

I’m out this evening on a frog blitz Field Trip with the Natural Resources Foundation of Wisconsin, learning about how to participate in the Wisconsin Frog and Toad Survey, America’s longest-running frog and toad calling survey. The project officially began in 1984, after conservationists had noticed a steep decline in a number of Wisconsin’s frog species: the Northern Leopard Frog, the American Bullfrog and the Blanchard’s Cricket Frog. Today well over 100 volunteers run more than 130 survey routes throughout the state, helping the Wisconsin Department of Natural Resources track trends in population size and location.

The importance of volunteers

“Calling surveys are an extremely efficient and effective way to monitor populations statewide,” said Andrew Badje, a DNR conservation biologist and Wisconsin Frog and Toad Survey coordinator. “Volunteers can cover much more ground than any single DNR team could in a year, and at a much reduced cost. The DNR is receiving a comprehensive statewide inventory of frog distribution, relative abundance, and long-term trends. In addition, data collected aids the DNR in determining where localized projects can best conserve populations of rare frogs. These volunteers are out doing something fun that also really makes a difference.”

The best part of having volunteers, or citizen scientists, Badje says, is that they become more invested in amphibian conservation and look forward to seeing data and trends that they themselves have helped collect.

“Besides having a lifelong interest in frogs and toads, I realize the need for dependable volunteer observers to contribute to important scientific studies, so I enjoy being a citizen scientist,” said Arthur Stevenson, who has participated in the Wisconsin Frog and Toad Survey since the early 1990s and is a senior lecturer at the University of Wisconsin-Stevens Point. Stevenson currently has two survey routes and does two extra runs at Sandhill Wildlife Area to listen specifically for the elusive Blanchard’s Cricket Frog. “Monitoring the health and population trends of frogs and toads is important as an environmental factor. I am glad to have been involved all this time.”

Each volunteer takes a survey route with 10 sites, which they monitor three times every spring and summer to ensure they hear both the early breeding species and the later breeding species. They record where they are, the weather conditions, the species they hear and whether they hear a few individuals or a din of calls all at once. They then report this information to Badje, who synthesizes all of the data at the end of the year. The program has become so popular in Wisconsin that some volunteers wait on a waiting list for 10 years before getting a route in their preferred county, especially those that are more populated like Dane County, home to the state’s capital city of Madison.

“I’ve learned how important it is to engage our community in these types of programs—they really enjoy it, appreciate the connection to the state and our natural resources,” said Licia Johnson, who began as a volunteer in 2015 after waiting for a route and is a naturalist at North Lakeland Discovery Center. “It is so important to take time to be out in the natural world, quiet and dark, to recharge yourself and center your mind. This survey is the perfect excuse to do that.”

Wisconsin has 12 frog species, one of which is endangered (the Blanchard’s Cricket Frog), while the Wisconsin DNR lists four species (the American Bullfrog, Mink Frog, Northern Leopard Frog and Pickerel Frog) as of “special concern.”

Members of the Natural Resources Foundation of Wisconsin learn about how to participate in the Wisconsin Frog and Toad Survey during a Foundation field trip. (photo by Jamie Corey)

“To observe the stars and planets, while hearing a beaver splash in a lake or muskrats munching vegetation against a chorus of calling frogs, and breathing in the earthiness of clean country air, is an experience unlike any other,” said volunteer Heidi Conde, who did her first survey in 2010 and has two routes. “I have seen bats flying over water in the moonlight, heard the mating and juvenile calls of owls, watched meteors streak across dark skies, and enjoyed the wonder of fireflies winking their greetings. I would recommend the experience to anyone.”

For more information or to get involved, contact Andrew Badje at andrew.badje@wisconsin.gov.

By Lindsay Renick Mayer. This story was re-printed from the Amphibian Survival Alliance’s Spring 2016 issue of FrogLog