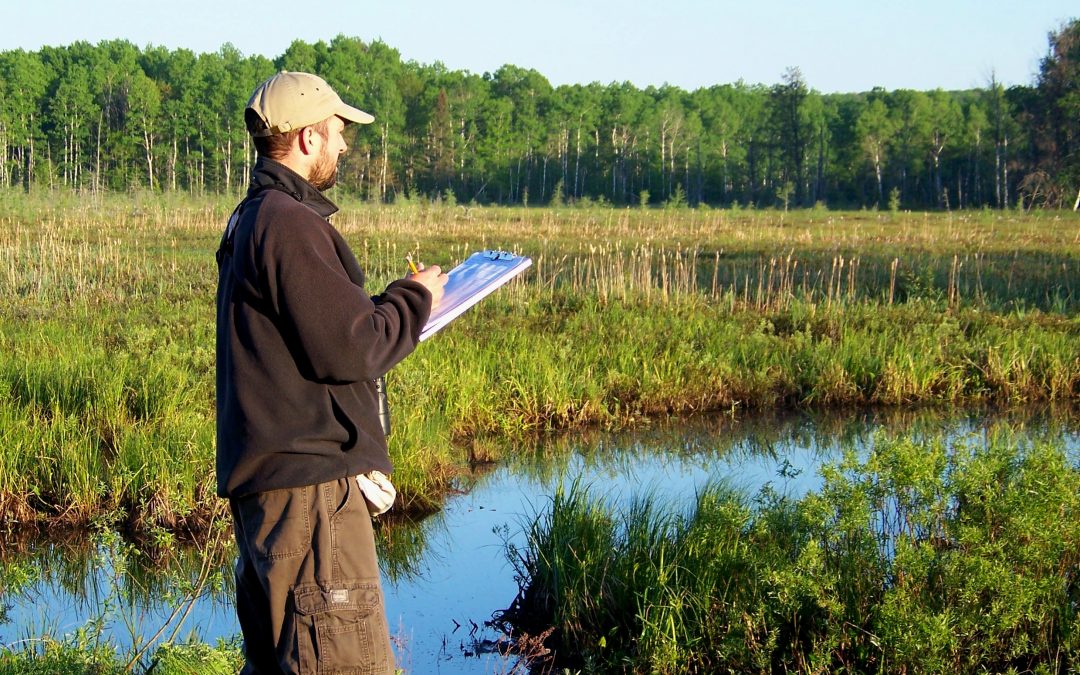 “That’s the silliest question ever!” Ryan Brady exclaims when I ask him if he has a passion for birds. I guess it is a silly question, seeing as he’s been coordinating WBCI’s Wisconsin Bird Monitoring Program for seven years. Brady recruits, organizes and trains 150-200 volunteers each year to monitor the bird species that fall through the cracks of other surveys: night birds and secretive marsh birds. In 2015, the Natural Resources Foundation helped fund the program through the Bird Protection Fund.

It becomes abundantly clear in my conversation with Brady that his passion for birds is buttressed by hard evidence about their importance. He says that monitoring birds is one of the best ways to measure a region’s biodiversity and environmental conditions. For instance, the owls that are monitored through the Wisconsin Bird Monitoring Program are top-level predators; the health of their population indicates health among the lower levels of the food chain. Healthy marsh bird populations indicate high-quality wetlands and good water quality. In the same way that canaries could indicate toxic gases in a coal mine, wild bird populations serve as indicators about the environmental health of an area.

The barred owl is the most commonly detected species on the Western Great Lakes Owl Survey and can be found statewide in various woodland habitats. (Photo by Ryan Brady.)

Brady works with a partnership of Midwest states that use similar protocols and combine their data into a centralized system. That way, bird species can be monitored on a regional and ecosystem basis, instead of by the (somewhat arbitrary) basis of state borders. The combined database allows researchers and conservationists to see trends across time and place. This has allowed them to publish several papers, and ultimately to change the way that land is managed. The goal of the project is to “do better things for these species,” Brady says. And if birds really can indicate environmental health, then “doing better” for birds means “doing better” for whole ecosystems.

Not only does the Wisconsin Bird Monitoring Program fit into the Natural Resources Foundation’s goal of protecting wildlife, but also its goal of connecting people to the great outdoors. The volunteers who help with the survey receive training—either online or in person—and any equipment needed. Brady emphasizes that “you don’t have to be an ace to participate.” If you can learn to recognize just a few birds and bird calls you can do the job, he says.

Brady also says that people really love helping out because they get a chance to get outside at a time or in a place that’s quite unusual.

“Often, even if we don’t find evidence of the particular birds we’re looking for, we observe other fascinating wildlife sightings, making all of the experiences memorable,” says Steve Fisher, a long-time volunteer with the program. Fisher acknowledges that this is very important work for citizen scientists to engage in, helping the state and regional coalitions gain knowledge about these species. It’s also clear, though, that bird monitoring programs are just plain fun for him and his wife, which is probably why they’ve come back to volunteer time and time again.

Another volunteer, Jim Otto, says that you never know what to expect when you participate in the program. He likes to get to his favorite natural area, Black River State Forest in Jackson County, early enough to do some exploring before he starts his bird monitoring routes. He does night-time nightjar monitoring for the program, and he loves to see the richness of the colors as the sun sets before he can start counting birds. One time, he was observing from a tower in the area and just as he turned to go back to his car to start his route, he saw a black bear coming toward him from the direction of the vehicle. With his camera and bear spray back in the car, he went back up the tower and waited for the bear to trot away. Otto has also seen families of otters, a porcupine and even come face-to-face with a timber wolf on his bird monitoring adventures.

E. whip-poor-will populations have declined sharply throughout much of the state, but volunteer Jim Otto sees and hears plenty of them in the Black River State Forest. (Photo by Ryan Brady.)

“The bird monitoring program is an excuse to get outside and explore, and also do something useful at the same time,” Otto says, “There are so many things that we still don’t know about Wisconsin’s wildlife.” He thrills in the opportunity to add new knowledge about what kinds of species live where, but laments that the state might be coming to its saturation point in volunteer hours for such programs.

I hope that the more people know about these awesome opportunities to be citizen scientists, the more people will volunteer. I encourage anyone with a love for birds, a hankering for new experiences in Wisconsin’s wild places or an interest in producing new knowledge about wildlife and ecosystems to participate in this or any other bird monitoring program. Visit the Wisconsin Bird Monitoring Program website for more information on how you can get involved.

Also, bird lovers look for an update soon about all the great programs that the Natural Resources Foundation’s Bird Protection Fund will support in 2016!