A field trip of prehistoric proportions 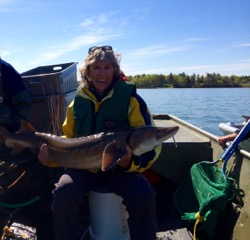 Chequamegon Bay (pronounce it like you’re saying “she warm again” without the “R”) is one of my favorite spots in Wisconsin. As an obsessed birder, I have visited often in pursuit of piping plovers, golden eagles and blackburnian warblers. On a cool day in late May, however, my objective was not feathered, but finned. Well, maybe a more accurate description is “armored.”

I pulled up to a small park in Ashland, on the Bay, where several fishing boats quietly rested alongside a dock and quiet men in waders and camouflage ball caps busied themselves loading nets and bins and mysterious electronic equipment. I was joining other Foundation members and DNR biologists this blue-sky morning to pull lake sturgeon from the Bay. The fish are measured, weighed and tagged with a low-frequency radio ID for tracking. Purely scientific…except for my rising excitement to not only meet one, but hold it!

Lake sturgeon are endemic to the Great Lakes basin but is considered rare in the United States. However, we are lucky in that it can be found in the Wisconsin, Mississippi, Chippewa, Flambeau, Manitowish and Menominee Rivers. And our Wolf/Fox River may be the only place where you can see them spawn in late April/early May.

The water was still, the air—though cool—was not freezing and the sun was out. No waves to bounce us around and thankfully no rain. We sped out into the bay behind the lead boat, which was already pulling up nets when we caught up. Even though our guides prepared us for the possibility of empty nets, it looked to me that the nets were heavy with SOMETHING. And we were not disappointed.

The net rose out of the water, the DNR staff leaned over, flopped a long gray snaky thing into the tub, and there it was, my first up-close-and-personal meeting with a lake sturgeon.

They are not pretty. But that’s okay because they are interesting. For one thing, this critter is old. 135-million-years-roaming-with-the-dinosaurs old. Not this particular fish, mind you, but her family. Our fish was probably a teenager. Despite a few thrashes, she was rather calm about being unceremoniously jerked out of her environment and placed into a plastic tub with curious mammalian faces staring at her.

Lake sturgeon look ancient, like the creator’s first draft of a fish. They have rows of bony plates on their sides and necks and a pointed snout with two pairs of whisker-like barbels to help locate their prey. Young sturgeon also have razor-sharp ridges along their backs that become duller with age. This is possibly a defense against predators while they are young, tasty and naive. Once they get big, however, they’re pretty impervious to everything but Man. Few, if any, diseases; fewer, if any, predators, except, again, Man. Sturgeon are bottom feeders, using their snouts to stir up worms, leeches, insect larvae and other soft-bodied critters living in the mud. Not a gourmand, but anything that eats leeches has my full support.

Their mouths have no teeth but their rubbery lips can extend much like a vacuum hose to hoover up food. Kind of gross, admittedly. Their tails are a bit like a shark’s, longer on top and, when they are spawning, poking out of the water and thrashing about just like Jaws.

They can be big, too. The fish we pulled that morning ranged from four to maybe five feet, which means they were younger. They can get up to six feet long and 200 pounds. One female caught in 1953 lived to be 153 years old. Most average about 55. They lead simple lives. They hang out, mature, and live pretty quiet lives snuffling along the bottom of the lakes and rivers they call home.

Having survived 135 million years as a species, it’s sad to think we were there that morning as part of a concentrated effort to protect them. Once killed as a nuisance because they damaged fishing gear, they became a target when their meat and eggs became gourmet items. In the latter part of the 18th and early 19th centuries, they were fished non-stop. Dams blocked their way to spawning grounds and the spawning sites themselves were damaged by silt runoff from agriculture and lumbering.

Since they don’t mature until 10 and breed only every four or five years–well you can do the math.

However in Wisconsin, Minnesota and Michigan, efforts have been made to undo the damage and reintroduce the fish into areas where they have vanished. Tagging along with the Wisconsin DNR that morning, it felt good to know we are making progress as the population seems to be increasing. I want to know that these ancient creatures will continue to be a part of our natural environment for another dozen million years to come.