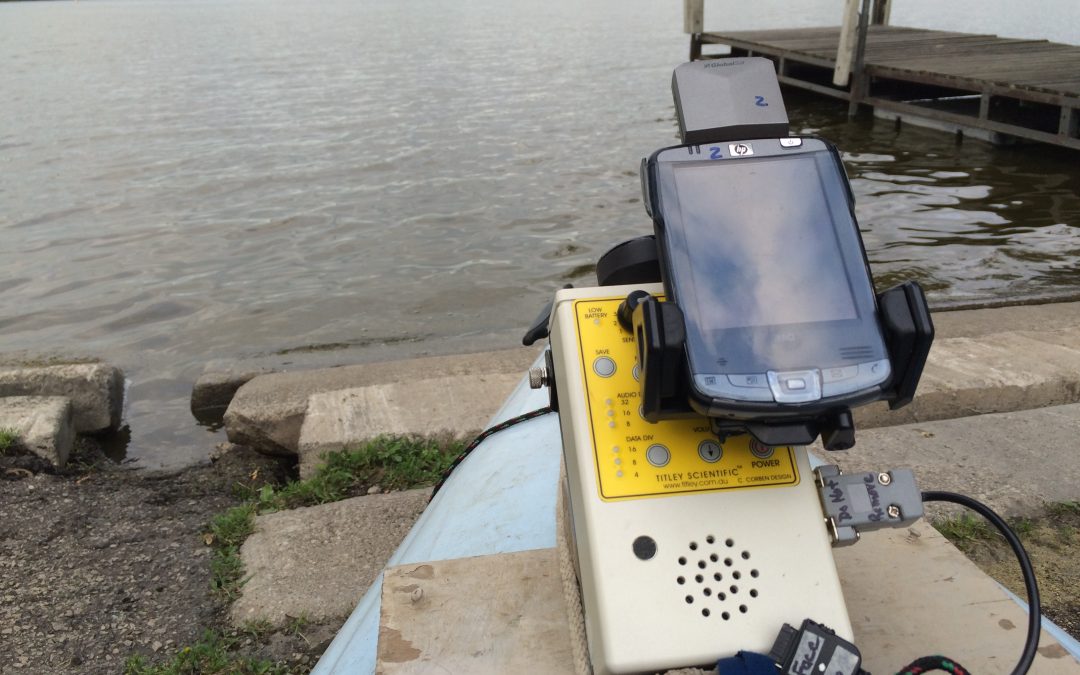 When the quiet of the night is interrupted by low, mechanical ticks, at first I almost miss it. “Big brown bat,” says Andrew Badje, a conservation biologist with the Wisconsin Department of Natural Resources, pointing to the squiggly lines moving across the screen of the noisy device he had hitched to the front of my kayak just moments before. I peer out over the lake to try to see the bat we just detected, but the little guy—who is much better adapted to night life—eludes me. It is only through the echolocation detector that the unseen world around me comes to life.

This is the real-life bat signal; my kayak the Batmobile.

Andrew and I are out on Lake Sinissippi in Dodge County, one of 36 bat survey routes on water (called BATLAS routes) the DNR has been conducting every summer since 2010 with some support from the Foundation’s Wisconsin Bat Conservation Fund. Just last year researchers confirmed that white-nose syndrome—the fungal pathogen responsible for more than 6 million bat deaths in the eastern United States—has made its way to Wisconsin, which Andrew says is the last stronghold for large congregations of bats east of the Mississippi River. Surveys like the one we’re doing tonight help the DNR establish a baseline for healthy populations and detect what may inevitably be precipitous population declines.

It takes us about an hour to kayak across the lake to our starting point and along the way we marvel at a nearby roosting flock of white pelicans. The water is choppy—enough so that I stave off the nausea only by paying close attention to Andrew’s every word and not on the motion of the waves. When we finally get to our starting place, Andrew warns me that his boss used to joke that in the case of a capsize, saving the echolocation detector comes before the person who has been capsized.

We wait about 20 minutes for civil twilight, when the Wisconsin Bat Program and volunteers begin their surveys. Tonight civil twilight is at 9:11 p.m. and as it approaches, the water magically goes still and the contours of the constellations begin to flicker into place overhead. At 9:12 p.m. we get that first bat, the big brown, and then we are off.

Wisconsin is home to seven bat species, three that are considered migratory bats and four that stay in the region and hibernate in caves and mines in the winter. Andrew explains that tonight we’ll most likely detect little brown bats, big brown bats, hoary bats, eastern red bats and eastern pipistrelles. As the bats use echolocation within about fifty feet of my kayak, the bat detector picks up the frequency and translates it both into a sound (rapid “tick tick ticks”) and a call signal, which fits in a range of numbers on a graph showing frequency (in Kilohertz) over time (seconds) in front of me. Where the range falls indicates the species, though confirming those species requires matching the signal with signatures collected in the past. Andrew will also create a map of the route showing which species we detected where. We skirt the edge of the lake, which Andrew tells me is within a stone’s throw of many bats.

This map shows all of the species–and where each individual was detected–that Andrew and Lindsay saw on their Lake Sinissippi bat survey.

Andrew is a self-proclaimed optimist. And I’m not sure how he could be as successful in—or genuinely passionate about—his job if this weren’t the case. Andrew was in the hibernaculum in Grant County the day white-nose syndrome was discovered there, the first time it had been found in Wisconsin. DNR biologists and other scientists in the state could face a daunting task. Researchers haven’t yet figured out a way to mitigate or eliminate the pathogen, which wipes out upwards of 90-100 percent of the populations it reaches. The fungus grows on the nose, wings and ears of hibernating species, waking them up when they don’t have any extra energy to exert and ultimately causing the bats to starve. Andrew believes that in the end it’s going to take a combination of human ingenuity and the evolution of natural resistance in the bats for them to avoid extinction.

“Luckily in Wisconsin we’ve had years to prepare and we’ve hopefully bought ourselves some time,” he says. “It’s going to be interesting to see what people come up with, but so much of this might come down to how the bats respond. What are the bats that are surviving doing that the bats dying off aren’t?”

The signals from the bats come in periodically for a good stretch of time and in the quiet moments Andrew and I talk about things like our families, our travels, and the space/time continuum, as you do when you’re out on a beautiful lake, under the stars, waiting for signs that one of Wisconsin’s greatest treasures is still among us. Two pelicans take off and fly overhead prehistorically, adding an element of the surreal to an already unusual evening.

When we come around the final bend, we take a detour to check out a small alcove and it is there that we find the most bats, the detector clicking non-stop as the lines zip across the screen. I still haven’t seen a single bat, but knowing they are there, alive, all around me is a comfort. In 2014, I joined The Nature Conservancy and the Maryland DNR on a bat survey in a mine complex where white-nose syndrome wreaked havoc. The first bat we found was dead and in the end we found only about 70 of the 400 bats that once hibernated there. So I know that next year may be dramatically different. I know that next year may be heartbreaking.

But I’m also reminded that these surveys are only one part of what we’re doing to conserve bats in Wisconsin and across the country. The DNR is working with landowners to ensure they have the tools they need to minimize the spread of white-nose between bats by humans. The Foundation and other organizations are helping fund land conservation, which helps reduce additional threats to bats. We’re also funding research projects looking at bat diets and roost tree use and funding bat house installations. And scientists at the national level are researching tools to control, cure or slow the spread of white-nose syndrome.

In this moment I am comforted by all of this, in addition to Andrew’s optimism and the knowledge that DNR’s bat team is on the case in a state that has traditionally been one of just a few leaders in bat conservation. In this moment, before we paddle back to shore with tired arms, I have the great privilege of rejoicing in the life behind every single mechanical tick that blessedly interrupts the quiet of the night.