Crane watching: One of nature’s many gifts 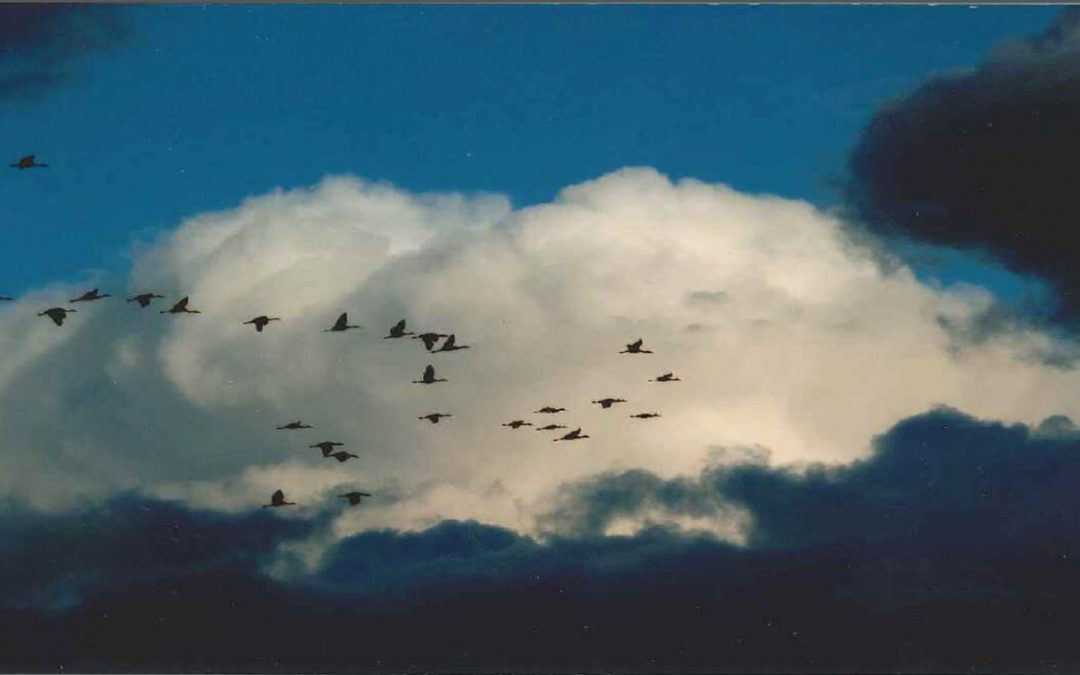 The great Sandhill Wildlife Area crane watching event occurred mornings and evenings in the fall. Thousands of sandhill cranes gathered together in a landing stage before making their way south on their autumn migration. Sandhill cranes are elegant, five-foot-tall creatures of varying shades of brown, topped off with a mark of red on their small heads. This event was brought to us by nature, instinct and habit, with a little help from the DNR and the Natural Resources Foundation of Wisconsin Field Trip Program.

“What are we doing out here?” I asked my ecologically inquisitive wife as we stumbled along the rain-soaked dike, feeling the occasional impact of small chunks of hail. “Did we make a mistake signing up for this thing.”

“It’s going to be great,” she responded. “This is one of those rare chances to really enjoy nature.”

The dike we tripped over led to the Gallagher Marsh, our destination to watch the evening show. The sloped angle of the dike leading to the drainage ditches would be our hiding-and-observation spot for the next one-and-a-half hours. The location was intended to keep us out of sight, thus causing no alarm to our subjects. Lying in the soggy weed beds with an air temperature of 40 degrees added to the mystery of my question: “Why are we doing this?”

The Sandhill Wildlife Area consists of a 9,500-acre plot of marshes, woods, water and undulating ridges of sand located near Babcock, Wisconsin, close to the center of the state. In the late 1800s and early 1900s, it was logged and drained in order to be farmed. But the soil was too acidic to successfully farm and it was thus abandoned. In the 1930s, Wallace Grange purchased the tax-delinquent property.

Grange was a conservationist and developed a game farm with the property. He enclosed it with an eight-foot fence, thus making it a valuable site for wildlife study as well as for  selling deer, grouse and waterfowl commercially. In 1962, Grange sold the acreage to the state, specifying that it be used as a demonstration area. The DNR, seizing the opportunity, developed numerous research, hunting and learning programs for the public. That brings us to our guided adventure on the property.

Our leader, a well-informed DNR naturalist, Britt Searles, positioned our group of 16 adventurists in a spread out fashion along the dike. “Remember,” she mildly admonished, “keep as low as you can get, and try not to make noticeable movements. We don’t want to signal the birds that we are down here. That will obviously scare them away.”

I looked at my watch. It was just five o’clock. The sun was resting behind some thick clouds. A few white cumulus formations along with a few patches of blue prompted my wife to point out that we were looking at a Maxfield Parrish sky, named after the noted illustrator.

Reposing in this unnatural position made the waiting minutes seem unusually long. Britt had warned us of the likelihood of probable impatience. “Sometimes it seems forever,” she said, “but the wait should be worth it.”

Then came the cranes

It was about 5:30 when the first honking sound began. It sounded far off in the distance, but we soon found out it was not. A pair of sentinel birds flew overhead, testing the safety of the situation. The birds, we knew, were cautious. After all, they have been around for two-and-a-half million years by some estimates. Their primordial and distinctive sound confirmed the feeling of a species with a great history.

Other sounds and birds followed, first in small groupings, and then in larger masses. Then V formations appeared against the whitish clouds, off in the distance, and then overhead. Then the landings started, as the beautiful creatures honed in on what seemed like a preselected target. The gliding patterns were magnificent, slow and precise, silhouetted in the mid-October sky.

Suddenly a voice rang out. “Do you see it? Look at that! This is what I came for.” It was Martha, our eighty-year-old viewing partner, crouching down in the reeds about 20 yards from us. “Isn’t it exciting?” she added. We could only agree.

In the minutes ahead, perhaps a thousand of the birds were visible, some close and some afar. Annoyance at the rain and sleet had been replaced by the wonderment of nature. We were happy because we saw a wildlife ritual which may have copied itself for hundreds and thousands of years. We were part of it.

When we had seen enough beautiful action for one evening, our group pulled itself out of the damp, muddy embankments and headed back to the Outdoor Skills Center. There was a deafening abundance of silence from all, as we reflected on the gift we had been given. Nature can do that, you know. Sometimes it is the resplendent quetzal in Costa Rica, or the disappearing polar bears in Churchill, Alaska. Sometimes it is just a robin in the spring. It is all part of the gifts we have been given, and we are the stewards.

Post Script: Twenty years ago, I had the opportunity to participate in the dedication of the Sandhill Outdoors Skills Center, also known as the Donald and Marilyn Anderson Center. It was a product of a donation given by a Natural Resources Foundation of Wisconsin board member. In 1988, our new board met in the old and inspiring Wallace Grange shack in the center of the property. We concluded that part of our mission was to educate young and old because that would impact the future. That day in October 2013 was one of those educational opportunities, our mission made real.