Day X: Stevens Points and the gifts of wetlands 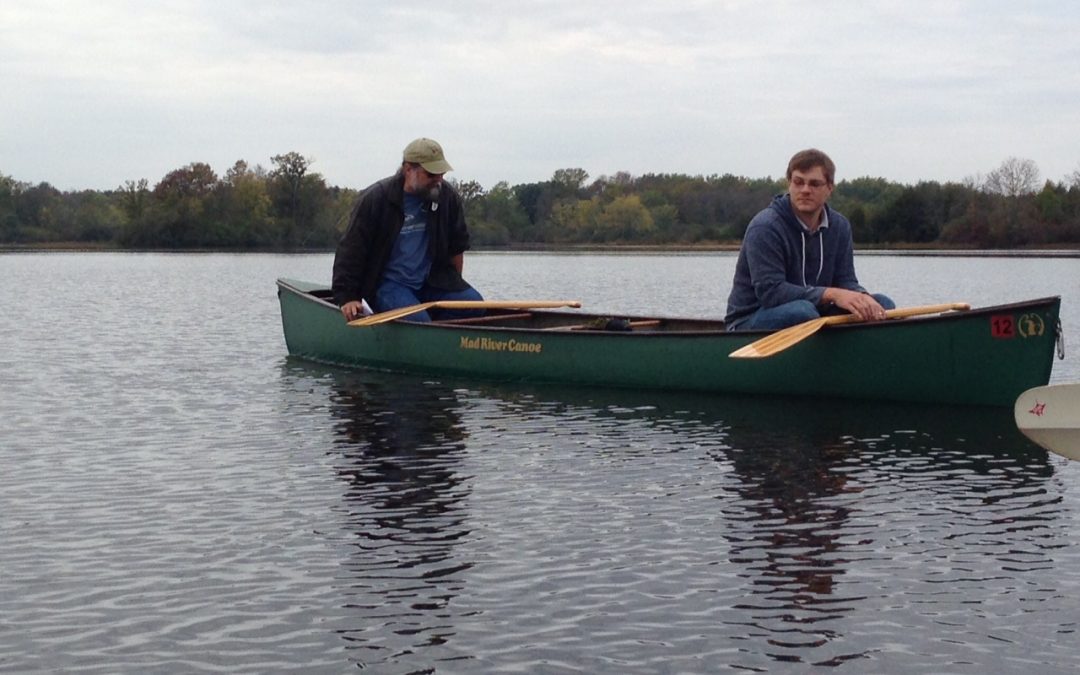 Listen to Ruth tell the story of Day X:

This is the blog for Oct. 6, day 10, in Stevens Point. A couple of weeks ago when I was talking about this trip with Tracy Hames at the Wisconsin Wetlands Association, Tracy hatched an idea that ended up being an incredible experience today. Tracy had done his graduate work at University of Wisconsin-Stevens Point on the wetlands system and islands upstream from Stevens Point, so he said “hey, Ruth, I’ll come paddle with you that day.” That sounded great because that’s what this trip is all about. And then Eric Olson from the UW-Extension Lakes Partnership said “hey, do you want to have a little event on campus?” At that point I was getting near launching for the trip, so I told them to take it away, that if they planned the day, I’d be there.

And boy, did we have a wonderful day!

We all met at the first lake boat landing, Tracy was there, and it turns out it was a great staff outing, they had been trying for months to find a day when all of his office staff could go out together and have a great experience. So all of the Wetlands Association staff came up, except for one, who was sick. Then we were joined by the SWAMP group, which is a student club that focuses on wetlands. I’ll talk more about them later, but it was great to have six or eight students from Stevens Point paddling with us. Also, Professor Lyle Nauman, who was on the faculty teaching water resources at UW-SP, now retired. We headed out onto the river and the lakes and Tracy taught us several things about the Wisconsin River. I went to Stevens Point for my graduate studies and I had no idea there were these beautiful wetlands out there!

A few of the things he taught us:

One of them was about how rivers and wetlands operate and how that is changed greatly when you have a dam in the system that’s regulating the water height. He showed us how originally many of the silver maple forest islands that we saw would get flooded over in the spring, spreading the nutrients over the whole land. Most of that doesn’t happen now unless there’s a huge flood. So the hydrology of the river has changed somewhat because the water is slowed by the dam and the sediment no longer flows through there but settles down.

Tracy was probably the first one to map the depth of these wetlands and he did a very thorough map over just two summers and a little extra time. He pretty much lived in his canoe out there and so he knows the area really well, although we kept ribbing him about if we were getting lost.

Tracy also studied this plant called water celery. It’s a really favorite food for waterfowl and, I learned, especially canvasback ducks. The wild celery has a real interesting life cycle. There’s a male and female plant and they grow separately and then find each other on the water. Then they drill down into the bottom. Wild celery has made a great comeback in Wisconsin. Nobody knows exactly why, it could be because of water quality. Tracy told me when he worked on this wetland system in the late ‘80s, the water was pretty polluted. It’s one of the success stories—it’s a lot healthier now than it was back then. As he said, so many times you go back to a place and it’s worse because more damage has been done over time. But in this case, this wetlands system has really improved. The water quality seemed better, there was wild celery growing everywhere. He showed us some of it, the tubers that grow in the ground in the fall that are a really important source of food and energy for migrating waterfowl.

He also told us that back in the late ‘80s there was purple loosestrife wringing every island, which of course was choking out the other vegetation. Now we saw very little evidence of purple loosestrife out there and we think that may have to do with those beetles that have been studied and chow down on the plant and kind of keep it in check. That was really cool.

I had been seeing this plant that kind of looks like cattails that have died down halfway, but didn’t have the brown cattail on the top. Tracy taught me that was bur reed and it’s a plant found all along the Wisconsin River, clear down to the lower Wisconsin and that the spherical, kind of spiky ball that is the seed head, inside of it has really nutritious grains that also are really attractive to waterfowl. One of the really cool things for Tracy was that he saw people out there hunting. There are duck blinds all over the place and that was really a true indication that this system has been brought back to a greater level of health, good for waterfowl through all stages of their life.

I really enjoyed being with students and hearing about their studies, what they’re majoring in. The SWAMP club is an extracurricular and yet it sounds like it was a really valuable experience for a lot of these students. They weren’t all water resource students. I know there was one forestry student and different majors and they learn all kinds of skills through the SWAMP club. They’re doing wetland assessments, they’re helping band ducks, they’ve done aquatic inventory of invasive plants. And it was just really great to see students on their own time rearrange their classes, rearrange their labs, so they could come out and learn from Tracy Hames of the Wisconsin Wetlands Association about his graduate project, which he had done while he was there at UW-Point, and learn about possible career paths, how Tracy ended up managing land for a tribe out of the state of Washington and how that work now informs him as executive director of Wisconsin Wetlands Association.

I also really enjoyed meeting Lyle Nauman, who’s retired now, but is really a bridge to everything that happened today. He’s involved in a local group that started from scratch, called the Wisconsin Conservation League and these guys have put together a local presence that has done some land acquisition, they’re doing land management of wetlands, they’re bridging with the students and finding opportunities for student projects. As far as Tracy knows, there’s no other organization like this in the state, a local, community-based wetlands group. They have a huge fundraiser event every year to raise money and put it toward wetland habitat. Kudos to them, and we hope to see more of that kind of community-based citizen group come together in their community, in their place, with their money, and their interests and their people. True community conservation.

When we finished our wetland tour upstream of Stevens Point, we paddled down into town and there at Bukholt Park was Chuck with the Wetlands Conservation League with a cookout all ready for us, a beautiful lunch, brats, hotdogs, hamburgers, beans, potato salad, chips. It was really a luxury to come off the water and have a hot lunch waiting for us. I’m so impressed with the Wetlands Conservation League. Chuck gave me a beautiful hooded sweater with their logo on it, which I will share and wear with pride.

Also, kind of just by coincidence, Foundation board member Tom Olson and his wife Barbara happened to be going through Point heading south at the same time I was in Point, so they came out to the cookout. Tom’s father Paul was instrumental in creating the Wisconsin chapter of The Nature Conservancy, was very active in prairie chicken habitat work and also the Madison School of Forest. Yesterday I also reconnected with Meta Reigel, a super good friend of mine for over 25 years. She’s on the board of the Northwoods Land Trust and has personally protected her land around her cabin with a conservation easement. For many years she taught at Stevens Point and worked with the Wisconsin Association for Environmental Education. I really enjoyed seeing Maeda again. She was the one who went up to the Lake Vieux Desert put-in the day I was putting in, or the day I was arriving, Saturday the 26th, and we just missed each other because she needed to get home. But she put a blessing in the river for me and I know that that has kept me safe and helped me connect with people along the way. It was a really fantastic way to start the trip.

Ruth with friends and Foundation board members Tom and Barbara Olson.

Lastly, I had so much fun last night with my River Angels, Tim Byers and Cindy Byers, old friends of mine from my graduate days in Stevens Point. It turns out that with Tracy Hames, we were all there at the same time. So it was fun to re-connect with our old friends and hear about the work Cindy does with the Rosholt Middle School teaching science, teaching health, using aqua lab water testing kits, teaching kids about NASA and space. Several of her students have gone on to careers with NASA. And Tim’s work with UW-Stevens Point, with distance learning and non-traditional students, has been a real sort of cutting-edge program for Point.

After having a great dinner with them, Eric Olson had advertised a program on campus and I met our board chair Diane Humphrey Lueck who is on the faculty of UW-Stevens Point and she had invited her class to come. It was great to be in the classroom again with these students with interesting questions and ideas. I know they were there to get extra credit, but they were really fun to be with and to talk with them about the trip, why we’re doing the trip, to talk with them about the significant budget cuts our state has seen toward conservation; and how important it is to have fully funded good science in our state and to have fully funded state parks and all of the many ways that they can help by learning about our state and our state’s policy and by being involved citizens. The day just ended on a really fun note sharing the day with others. I hope that this experience and what I’m learning about these individuals and these groups that are doing good work in our state, I hope that those stories will keep being told one way or another, either through the website, presentations or maybe I can write an article or something about it.

A wonderful day in Stevens Point, thank you to everybody who helped make it happen. It was great to be back on campus again and it looks like despite the—I think it’s more than 100 positions that are going empty because of the state budget, UW-Stevens Point was hit the hardest by the state budget—despite that, their enrollment is off the charts. There are more and more young people interested in the education that’s available at UW-Stevens Point, and that’s a great thing.