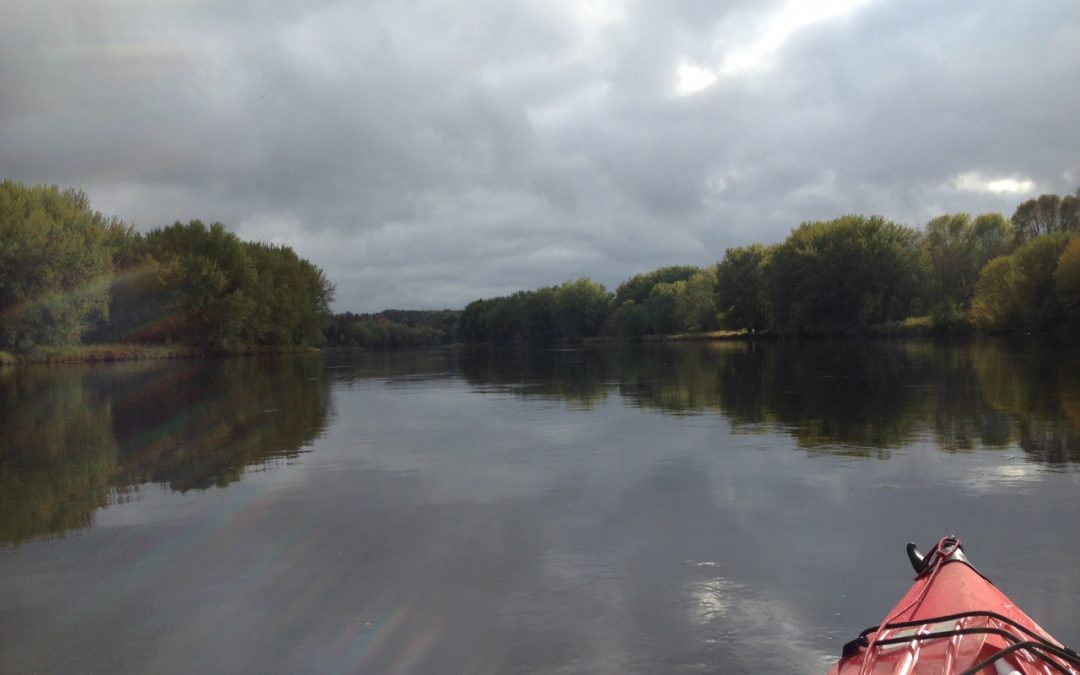 Listen to Ruth tell the story of Day IX:

This is the blog post for Oct. 5, day nine, Merrill to Wausau. Today three good Samaritans helped me out and really made a huge difference and I wanted to say thank you. I was kind of whiny about camping at Council Grounds State Park, but there was one really great thing: the campground host. I eventually found him that night and he asked when I wanted to be out on the river. So this morning, after I had packed up and I went up to brush my teeth, I came back and there he was with the electric cart, ready to take me down back to the canoe portage, which I greatly appreciated. It had rained all night, so my tent was wet, but everything else was dry and he drove me down and was super pleasant even though I had been grumpy the night before. He said “all I have is time” and was super helpful.

I headed down from the park into Merrill and pulled out at the Wisconsin Public Service Corporation Dam there. Kudos to the city and the power company and everyone else who was involved with a beautiful new paved bike trail that goes along the waterfront there in Merrill. The canoe portage is actually part of the bike trail, so it was the nicest portage I’d ever done. There was sort of a grassy slope and I was able to pull my boat up to the top of that, load it up and then put the cart on and look forward to taking it down the portage trail. While I was doing that, an employee came up and was really helpful and offered to drop my big heavy Duluth pack down at the put-in at the bottom below the dam. I really appreciated that. People have been helping me so much. I just love it. You just put yourself out there and ask for help and people respond. It’s very heartwarming.

I was looking up from the portage there and you can see part of Main Street, and there was an Ace Hardware store and I thought “yes!” because yesterday, as I may have reported, I tripped on the portage at Grandfather Falls, fell onto my boat and cracked a top rib on the back of the boat. So I went up to the Ace Hardware store and you know how hardware stores are—they represent the health of the community. I explained the problem and they gave me two solutions: 1) They custom cut and sanded off a splint that I could slide over the fractured area to bridge the two pieces, and 2) They gave me this tape that, when you get it wet and you wrap it around something, it turns hard like steel, and that’s going to be a more permanent repair for me. I went back to the boat, put a little duct tape on the ends of the pipe so it wouldn’t tear the fabric, slipped it on and presto bingo! That rib looks good as new. I want to thank Jerald at the Ace Hardware Store in Merrill for helping me out.

I paddled from Merrill down into Wausau and it’s a beautiful stretch. There were two things I saw that were really, really fun for me. I went under Highway 51 at a place where I had often looked down at the river. Part of the initial inspiration for this trip was having driven Highway 51 and looking out on the river and thinking “I should canoe that someday.” And so now here today I was doing it, I was down there on the river doing what I had dreamed out. Right after the Highway 51 bridge on the right-hand side, the north side of the river, I found a pile of mussels, which look like clam shells–thousands of them spread out under the water, along the banks, the biggest pile I had ever seen. I have a video of it and I’m just asking people “what do you think ate those?” I’m kind of thinking a river otter, but I’m not sure. There was a neat little den under a white cedar tree, but it was like three feet out of water. But then again looking at the bridge abutments, you could see that at one point the water had been four or five feet higher. Maybe it’s just during a flood, but the water is pretty low right now and so if that was an otter dam, it now is exposed to the air, maybe they still use it, I don’t know. So I’m asking people for their thoughts about who may be eating those mussels.

I came down to the Browkow Dam and I had heard from paddlers that I probably should not run it because it never was appropriately cleared from the river, so there are honks of concrete with ribar sticking out. The minute I got out at the portage, which is a bunch of loose rocks piled on the right-hand side, I saw a piece of eight-inch rebar sticking up just on the portage trail and I thought “man, I’m not doing that.” Plus my cart could never go across those loose rocks. But also I didn’t want to run it because of what I had heard about the blocks in there, even though it would have been much faster just to run it. The only option I could think of was to line it. So back in the water I go, it probably took me more than 30 minutes just to go 200 feet. I tried to push my boat out a little bit where there’s more water and then I walked along the side and tried to guide it down. I got hung up a lot and never could have done it unless I went down the middle in the boat. Eventually I got around that, but it’s definitely a problem area on the river.

Then there’s the most amazing stretch for anyone who wants to see some beautiful fall colors in a week or so. The river feels like it’s down in a valley coming into Wausau, surrounded by hills that go up from the river, covered with tall pines and maples, hardwoods, and just stunning scenery coming into Wausau. I’d really recommend that little stretch there. I was met by Natural Resources Foundation board member Peg Mallery. I want to talk a little bit about Peg and also another amazing woman in conservation in our state who I had dinner with tonight in Peg’s home: Jane Wiley.

Both of these women are avid outdoorswomen, both of them hunt birds, elk, deer, they fish. They’re such an inspiration and they each have served conservation in their own way. Peg has been on the Natural Resources Foundation board for, I think it’s 18 or 19 years now, so she has helped guide the policies and the growth and helped govern our Foundation and served as treasurer for many years. Because a big part of what we do is make grants and raise money, Peg has been such a valuable board member as treasurer, as a fundraiser and a good governance adviser. Her home is right on the Wisconsin River. I really, really enjoyed dinner at Peg’s home.

Jane Wiley was also at the dinner and many of you know her from the Natural Resources board. That is a board appointed by the governor that makes the rules for the Department of Natural Resources. Jane has been on that board for eight or nine years, maybe more, and has been a really good voice of reason. She is also a very avid outdoorswoman and she knows what she’s talking about when the board discusses things like hunting, season regulations, wastewater quality regulations and so on. Both Jane and Peg are personal heroes of mine for the work they’ve done for our state and it was a delight to have dinner with them.

That finishes up my ninth day on the river. I’m more than halfway done and I still have some incredible things to look forward to. Thank you to those who have been reading and following along. I’m still repairing holes in my boat with little dabs of shoe goo and I’m still having a fantastic time.