Day VII and VIII Revisited: Learning from the Land and the Power of Partnerships 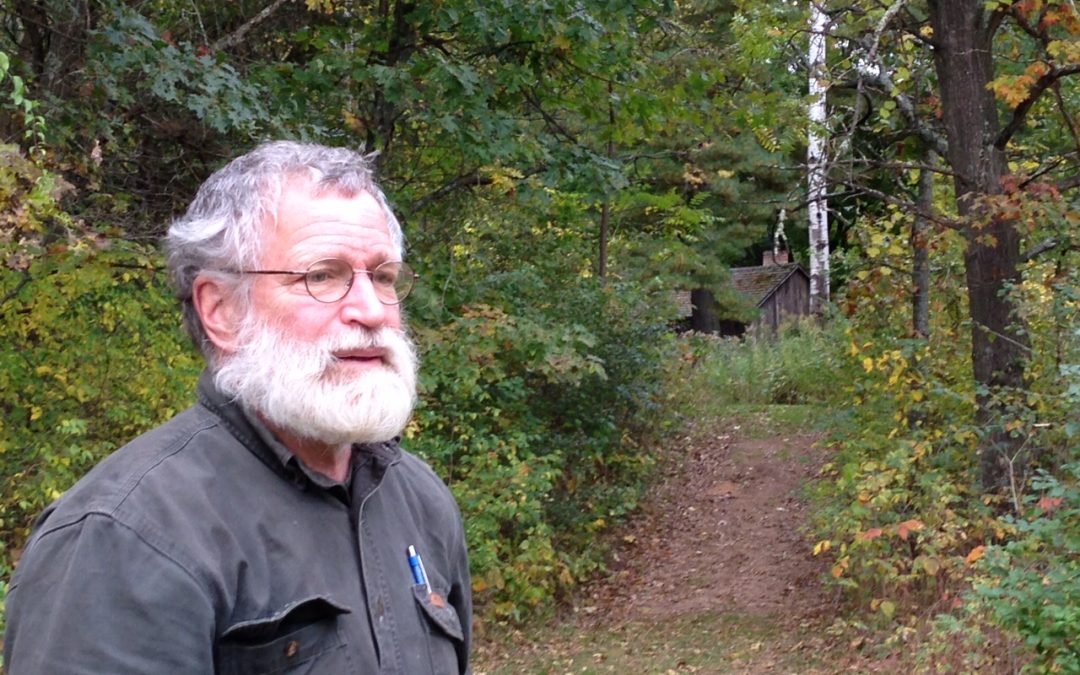 As my wife Lisa and I stood on the sandy banks of the Wisconsin River at the Aldo Leopold Foundation’s Leopold Memorial Reserve last Thursday evening, awaiting Ruth’s arrival, I was grateful to know Sauk County as my home. It has been a conservation hotbed since even before the 1930’s, when Aldo Leopold and his family began to restore this worn-out piece of land and learn its many lessons. The Leopolds, and the foundation formed in their honor, are part of an age-old tradition. The land goes on teaching and teaching, offering itself to all who will listen. I looked forward to exploring it with Ruth and fellow conservationists here for the next few days.

Mike met Ruth at the Aldo Leopold Shack to catch up and talk about conservation.

We began with an ancient tradition at dusk, lying about a black-oak campfire, cooking deer meat, roots and tubers, talking into the night. Toward morning the waning crescent moon arose and cast a wobbling reflection upriver toward us, then disappeared into the clouds.  We arose, Lisa headed off to teach kids.  Ruth and I rekindled the fire for coffee and tea, then walked over the sandy barrens to the Leopold Shack where we met Charles and Sue Bradley of the extended Leopold family, who had stayed overnight and were collecting seed for the prairie restoration at Holy Wisdom Monastery—spreading not only the word but the substance of Leopold’s conservation ethic. Ruth had old conservation connections with them.  They reacquainted and discussed matters old, current and future.

Yoyi Steele arrived. She is the coordinator of the Wisconsin Important Bird Areas program, which identifies and helps guide management of the most significant bird habitats in the state.  It relies on the Natural Resources Foundation for much of its funding. We were joined by Aldo Leopold Foundation staffers Dan Hoff and Carl Cotter. We all discussed how sound, careful science, cooperation and planning has taken the project from the initial bird surveys to a vibrant process of “adaptive management.” This program has helped the individual actions of partners—state, federal, non-profit, and private–contribute to a whole that is greater than the sum of its parts, not just for the birds but for the habitats that support them and other wildlife.  An example is the restoration of floodplain savanna on the Department of Natural Resources’ Pine Island Wildlife Area, which is being expanded to several other ownerships, creating a remarkable, cooperative effort to recover an internationally-threatened community and its birdlife. So, thank you Natural Resources Foundation, for helping make this happen!

Yoyi, Ruth and I then set off down river.  Leopold-Pines Important Bird Area partner Jim Pines watched from his property as we approached among the sandbars. He has allowed many field trips (including those through the Natural Resources Foundation) to come and watch sandhill cranes roost here by the thousands in the fall, as they stage on their southward migration.  We walked to Jim’s house and ate lunch at his kitchen table, where Yoyi, Aldo Leopold Foundation ecologist Steve Swenson and I had spent many occasions with Jim, and formerly his father Phill, looking over maps and discussing plans about the Important Bird Area and the management of their property. Now Jim explained to Ruth how important this has been to his family and their land.  He described plans to replace row-crops with pasture to benefit the land and its birdlife.  Jim is a businessman and had good questions about how the Natural Resources Foundation works, how funding is prioritized and how endowments are managed. He took us to a wetland restoration on his property, where our monitoring has documented an amazing amphibian response. We marveled at the numbers of waterfowl feeding and flying about in great flocks. We also passed a dark green pasture peppered with the tall gray forms of sandhill cranes probing in the damp turf.

Jim Pines looks out on the wetlands he has restored. Photo credit Mike Mossman.

Back on the river, we waved good bye to Jim and enjoyed some quiet paddling, calm air, fair sky and the river’s familiar sand bars, shoreline barrens, forests and late-season birdlife, which included ring-billed gulls, Canada goose, wood ducks, sandhill cranes, shorebirds, kingfishers, and many bald eagles. Sometimes Yoyi and I felt a little sorry for Ruth, as she interrupted her quiet progress to make arrangements and reports by smartphone.

Near the historic portage between the Wisconsin and Fox Rivers, Yoyi left to pick up her son at school, and Lisa reappeared after her day with a different set of kids. For another couple hours we paddled down to the delta of the Baraboo River—home to the red-shouldered hawk and prothonotary warbler—but we didn’t have time to explore this favorite place.  As the sun set behind its extensive floodplain forest, we passed a group of about 20 bald eagles preparing to roost. Close by was an island owned by the federal government, which has been working to return it to savanna.  It was well beyond 5 pm now, so we ended our trip at the landing below Baraboo—tired and content.

We are proud of Ruth, of the Natural Resources Foundation, of Conservation

On Sunday night, Lisa and I gave our annual Natural Resources Foundation-sponsored field trip on turkey vultures at Devil’s Lake State Park, in which people get to see this much-maligned bird up close in-hand and in masterful flight, and learn about its fascinating adaptations.  The place was overfilled with visitors on this very warm and colorful fall day. We stood on the bluff, watching vultures mingling in the air over the vast, multicolored forest and bluffs, often sharing views through our optics with passing tourists, especially kids.  Attendees started talking about other Natural Resources Foundation field trips they had been on, and which were their favorites.  They LOVE the field trips and wish that even more were offered, including during the winter–lamenting four months without field trip opportunities

We were proud of Ruth’s trip, proud of her and all the Natural Resources Foundation staff and supporters, and reminded folks to check out the I Heart Wisconsin page.  As we walked back down the bluff, I heard some of the participants talking about how good it would be—in these days when state employees and teachers are often vilified or considered freeloaders, and their funding gets cut—for a newspaper to highlight the stories of a few dedicated public servants.