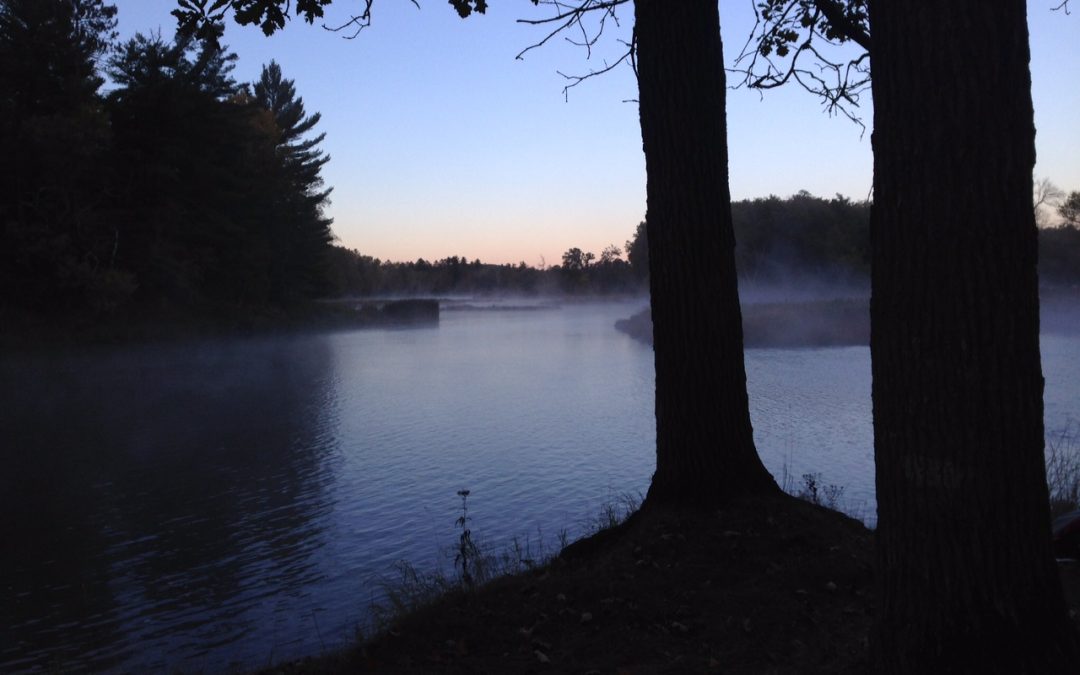 Listen to Ruth tell the story of Day VII:

This was the stretch of the river from Menard Island into Tomahawk. This morning was a really great day because I reached my one hundredth mile on the trip! But before I got there, oh boy.

I had an incredible campsite on Menard Island. I was dropped off by the Watsons and Neil on the upstream end, which was beautiful with golden white pine needles, just carpeting the floor. But there was a bit of a wind. When I walked to the other end of the island, there was this incredible point where I knew I was going to see the sunset. So I moved my gear to the downstream part of the island, which also meant that I could move the boat through the riffles and pretty much be done with the shallow water.

I did a bunch of repairs on my boat. They talk about in the old days the voyageurs used to patch their boat every night with tar pitch. For me, I patch the bottom of the kayak every night with shoe goo. I think it worked, though. More on that later.

I had a great night sleep. I think, this is funny, but I think it’s due to the Homer Simpson polar fleece pants that were lent to me by Tom, so thank you Tom. I slept so well that I slept until seven o’clock, which is unheard of considering that it’s pretty cold out. Or maybe I just didn’t want to leave my sleeping bag.

So I didn’t even put in until about nine o’clock. I headed down the river toward Tomahawk, went under the County A bridge and turned kind of west onto Lake Allice. That’s a flowage, which means you lose the current. Lucky for me the wind was behind me but it was gray and cloudy all day, just scudding gray clouds. They didn’t feel like rain, and thank goodness it didn’t rain. Just kind of cold and windy, with choppy water on Lake Allice.

When I got to King’s Dam I thought, “Great, all I have to do is get over and Tomahawk is on the other side.” And I just had a terrible time. Turns out it’s owned by the Tomahawk Power Company and I’m ready to write a letter just to ask for a canoe portage. I came up to the dam, and it was just one rocky wall about six feet high, concrete debris and boulders with a grassy top. It was deep water. It was a steep incline, and it was really, really hard to get my boat out of the water and get it over those shards of concrete, and somehow pull it up to the grade. I don’t know if I missed the portage. The maps all said it was on the left, but there was no good take-out, especially with the waves crashing in.

I strapped the cart on and went down, down, down on a kind of a gravel sidewalk onto a gravel road, to what looked like a put-in, which was also terrible, in fact. There was a piece of concrete with rebar sticking out on it, and I just thought, “This is crazy.” But I put in there. It took me a long time, and the water was pretty deep. I paddled down about 50 feet or 100 feet and all of a sudden there was this nice sandy place where I could have easily put in if it had only had a sign. It was down the county road and I didn’t feel like I should wheel my kayak down the county road. I just thought, “No the portage can’t be down there, it has to be on the property of the power company.” At least I could have put back in in a nicer place without the rebar. But anyhow, it’s something I’d like to follow up with later.

I paddled on down the river as it heads into Tomahawk.  The cool thing was it went under the Highway 51 bridge. I’d seen the river from there and it’s neat to finally be paddling it. It was rimmed with houses and docks as I went into town, went under the County S—probably Main Street—bridge. I paddled right up to the Tomahawk Library. The reason I was going there was to show and tell you another way that people love Wisconsin.

I met Dave and Joyce Weizenecker there, who had established an endowment fund through the Foundation for books for the library. What a cool thing! These are conservation books. They could be about hunting, fishing. They could be about the rainforest. They could be about plants, animals. Every year the earnings from this endowment can go out and help the library bring in speakers about conservation. It has made grants for two years now. And before that, Dave and Joyce had established another endowment for state parks, specifically to make parks more accessible to people with disabilities. Dave was the Wisconsin Department of Natural Resources state parks director for many years, and this was a way that he could help give back to the state parks system by creating this endowment. On behalf of the Foundation, I am so honored that he and Joyce would make a donation like that for the people of Wisconsin. I think it’s just another great story about how individuals who “heart Wisconsin” can make a difference.

I was joined with Dave and Joyce by a reporter from the Tomahawk newspaper, Tom Colstad. Great guy, super outdoorsman, lots of trips out west and so on. It was really nice to talk to him about why I was doing this trip and help get the word out about the actions that people take, like Dave and Joyce, to create endowments. And I want to thank Tom for taking time on a Saturday, his weekend off, to come into town and talk with me. Really good meeting him.

A little bit tough today, but I really can’t complain because my River Angels, Dave and Joyce Weizenecker put me up for the night. They took me out to eat at the family restaurant. I got to have a baked potato, which was just like heaven on earth. I came back to their place and went over my maps. I ordered a pair of water sandals because my water shoes are causing all kinds of blisters on my feet. I think in a couple days here, between the neoprene socks that Sue Watson gave me and the water sandals that fit my feet, I think that my feet will be a little more comfortable. They’re wet all day, and then I get sand in there, it’s just not good for the old feet. Just like hiking, the first thing you do when you get off the trail is you take care of your feet. It’s the same thing I do on a kayak trip!

It was a real treat being able to stay overnight in Tomahawk in a nice, warm home, thanks to my River Angels, Dave and Joyce Weizenecker. I look forward to heading down tomorrow towards Grandfather Falls, Grandfather Dam, a very interesting, historic portage there along the penstocks.