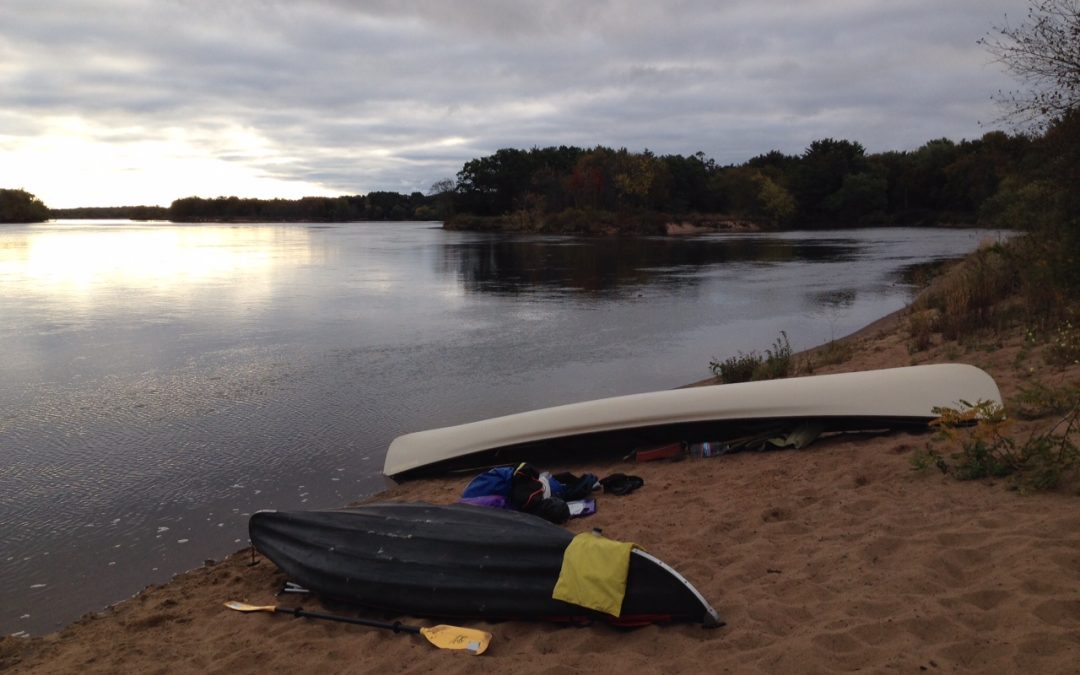 Listen to Ruth tell the story of Day XII:

I’ll start with the ending of the day. I pulled up on the right side of the Wisconsin River at the site of Aldo Leopold’s shack. What an inspiration to be coming down this river that he was so familiar with, with eagles flying overhead, with cranes flushing off the sand bars and settling back down—hundreds of cranes—and with the geese arcing across the evening sky in a V. It’s such a thrill to be at this same place where Aldo Leopold saw these same things: saw the geese, saw the cranes—well actually there weren’t very many cranes when he was here in the ‘40s and ‘50s.

The sections that we did today—the Upper Dells and the Lower Dells—you feel like they are the same as they have been for the last 50 or 100 years. I’m sure it seems amazing. You might say, “No that can’t possibly be because the Dells has turned into this huge tourist trap.” One thing I learned today was the important work that the state has done through the Department of Natural Resources State Natural Area program and the State Stewardship Fund. As many of you know, the Nelson-Knowles Stewardship Fund has been greatly reduced now to $33 million a year. This is an important fund that is used to buy land for parks and trails and help local municipalities. It buys natural areas, and all these areas are open for hunting and fishing.

In the Upper Dells there were miles of shoreline that were purchased by the State of Wisconsin and held in trust for all of us to enjoy. I highly recommend a float down the Upper Dells where the beautiful rock faces plunge directly into the Wisconsin River. As you come down into the narrows area, there are shady glens and carved rock, and you can think of the lumber rafters trying to get around Devil’s Elbow and the narrows. You hardly see a building and there are just a few houses here and there but it feels very wild. That’s thanks to the work our state has done to protect the Wisconsin Dells river way.

There’s also a great local group that I learned about called the Friends of the Dells of the Wisconsin River. They have worked hard as advocates to protect the Dells section of the river. One of the concrete results is that they’ve put in a no-wake zone in the narrowest part. It’s very scenic there—perhaps the most beautiful part—and if you were going to canoe or kayak it could be hard to do when there’s a lot of motorboat traffic. So thank you to that friends group. I hope that their work continues to prosper.

Yesterday I paddled with Denny Caneff of the River Alliance and learned that there are half a dozen to a dozen community-based river groups all along the Wisconsin River that are advocating specifically for the river. It’s good to know that they have the support of the River Alliance in their training and materials. Really the best conservation work is done locally. Kudos to those conservation groups.

We had a pretty terrible portage at the Dells. Took off near the power station onto a gravelly, washed-out trail to the road. Then, of course, the road was great because I have the cart. Luckily, I had the help of Frank and Mariana Weinhold. Frank took my huge Duluth pack over and then wheeled the kayak over. But then when we got to the put-in it was down a washed-out, gravel gully. This gully was one to two feet deep and the cart didn’t work that great. I never could have done it alone. So one more time on this trip there was a part of it I never could have done alone and somehow there are people who either anticipated that or happened to be with me at that time of day to help me get around some of these portages.

When we entered the Lower Wisconsin, the river widened up and had more—out west they call them hoodoos. Sort of like pillars that you can kayak around. There aren’t a lot of them, but they’re sculpted by the water and the wind and there are also little sea cave overhangs. So the river’s wider, but there are also more interesting separate rock formations, not just the cliffs. And for miles, I kept seeing the yellow signs that said “state property” and I never once saw a water park or a go-cart or the “Future House of Foam,” or whatever it’s called. It’s an amazing paddle through the Dells. You can totally avoid the tourist trap if you just stay on the river.

I had an amazing time meeting Ed Legge from the Dells Events newspaper. One of the things he told me was that the City of the Wisconsin Dells has actually engaged a planner group, the same ones who planned the new entrance to Lambeau Field, to revitalize their downtown. They’re going to turn more toward the river; they’re going to expand their river walk; and they’re going to look at historical facades for their buildings. What a wonderful thing for a community to return to its authentic roots as a river town that exists, originally 150 years ago, purely because the river was a scenic destination for railway travelers. Even now, it’s a scenic destination. I encourage you to paddle the Dells on a weekday, probably not a weekend when there’s a lot of boat traffic, and definitely later in the year. Right now, October, is a terrific time to paddle through the Dells.

To wrap up, I took out at the Leopold Shack. We had permission to camp there that night and I met good friends Mike Mossman and Lisa Hartman. Had the most delightful evening around a campfire, talking about conservation, talking about the work we do, whether it’s for swans, black terns, how much we all love the Wisconsin River, how their son Angus took his  first steps on the beach of the Wisconsin River. It’s such a friendly place to camp, with the sand and the sun and the wildlife abounding, the birds flying overhead. We had a tiny little campfire in a pan. Kept all the coals together so that it wouldn’t litter the beach. Sat up, watched the stars, listened to the birds, heard an owl, heard the snorting of an otter in the river. There’s nothing better than sitting around a campfire with good friends and good conversation. So thanks to Mike and Lisa for your friendship and also for the conservation work you do. Looking forward to paddling down now from the shack into the Pines Leopold Important Bird Area. More on that in the next edition.

[Note: The next edition of the I Heart Wisconsin blog will come out Monday, Oct. 12]