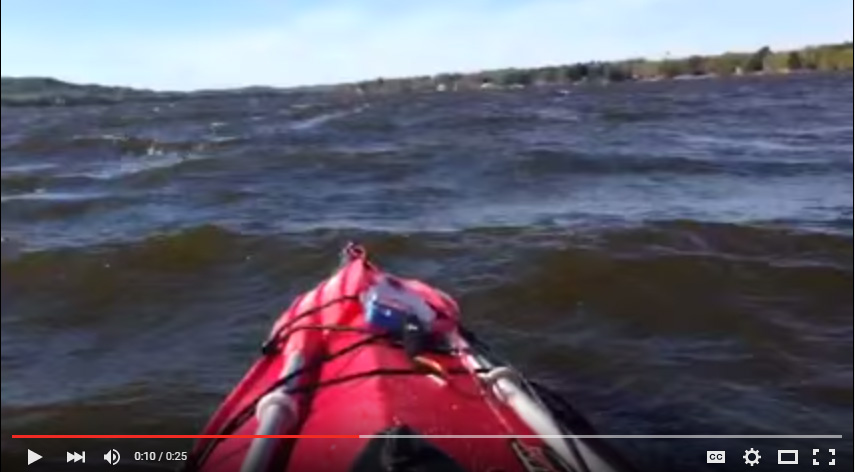 Listen to Ruth tell the story of Day XIV:

Today I’m totally defeated by the wind and waves on Lake Wisconsin. I started out at 9 a.m. this morning after Pete Ostlind helped me go over the boat. We did a little extra patching, he replaced a rivet on the washboards (sort of like the cockpit edge) for me and we went over the whole boat and I headed out around 9 a.m. There was some fog and clouds burning off the lake, it was just beautiful.

The first couple miles were fine, just slightly windy, choppy water. When I got within a mile of the Merrimac Bridge, the wind really started to pick up. It was going anywhere between 13 and 17 miles per hour. I got through the bridge and crossed the ferry plane and had to wait for the ferry. Also had a motorboat kind of wham me with their wake. They were totally oblivious to me. Then I kept going for a couple miles down to a boat landing where I could take a lunch break. By then it was 2 p.m. I’d been paddling against westerly winds from 9 a.m. until 2 p.m. Five hours. After the lunch break I crossed over to the other side of the river, the north side, thinking I could be sheltered from the wind. It didn’t really help. It took a lot of time, too, which is a bummer.

A mile or two after that I saw there was a boat launch, upstream of Sauk City and Prairie du Sac. I thought “enough of this, this is no fun.” The waves were breaking over the front of the boat. And I forgot to mention, at the lunch break, I had to dump a bunch of water out of the front of my boat. I don’t know how it’s getting in. I had to pull off at Summer Oaks Boat Landing. I just didn’t feel safe. So, this has been probably the most challenging part of the trip. I always knew wind was going to be my biggest problem.

Luckily, I had arranged to meet some friends, Janet and Wayne, for supper in Sauk City. They’re already up in the area, and they’re going to come pick me up. We’ll probably do several shuttles because they have a nice energy-efficient Prius. Anyhow, did my best and we’ll see how the Lower Wisconsin looks. It’s a big, wide river. There can be a lot of wind on the river down there, too. I’m glad to be coming into Prairie du Sac and looking forward to camping tonight at Veteran’s Memorial Park.

The day was redeemed by my River Angels, Janet and Wayne, who picked me up upstream, several miles north of the Prairie du Sac dam, and ferried me down to Veteran’s Memorial Park. I am really glad I got off the river. A bunch of motor boats were getting off the river at the same time. It was just too windy out there.

Wayne and Janet and I had a wonderful dinner at The Blue Spoon in Prairie du Sac. They took me to a store to get some chocolate, which of course always helps the situation. At least in my case it does! It ended up being a really wonderful evening. I want to thank Janet for all her work. She’s a retired Department of Natural Resources employee. She was the coordinator in the early days of the Nelson-Knowles Stewardship Program. That important grant program allows local municipalities, land trusts, the state to purchase land for parks and trails and nature preserves. It’s made a huge difference in our state in setting aside lands for conservation, but also for public hunting and fishing lands. It has provided infrastructure funds for updating state parks and also, really importantly, the Nelson-Knowles Stewardship Fund has been available to local municipalities to help aid them in improving and upgrading their park systems. Janet was one who really gave shape to that program and set up procedures and protocols. It required really strict accountability.  It’s been a wonderful thing for the state of Wisconsin and a true example of the conservation legacy that Wisconsin has in the nation, for being a leader in taking care of natural resources and in conservation of lands and water.