Day XVI: Striving for clean air, clean water and a connection to nature 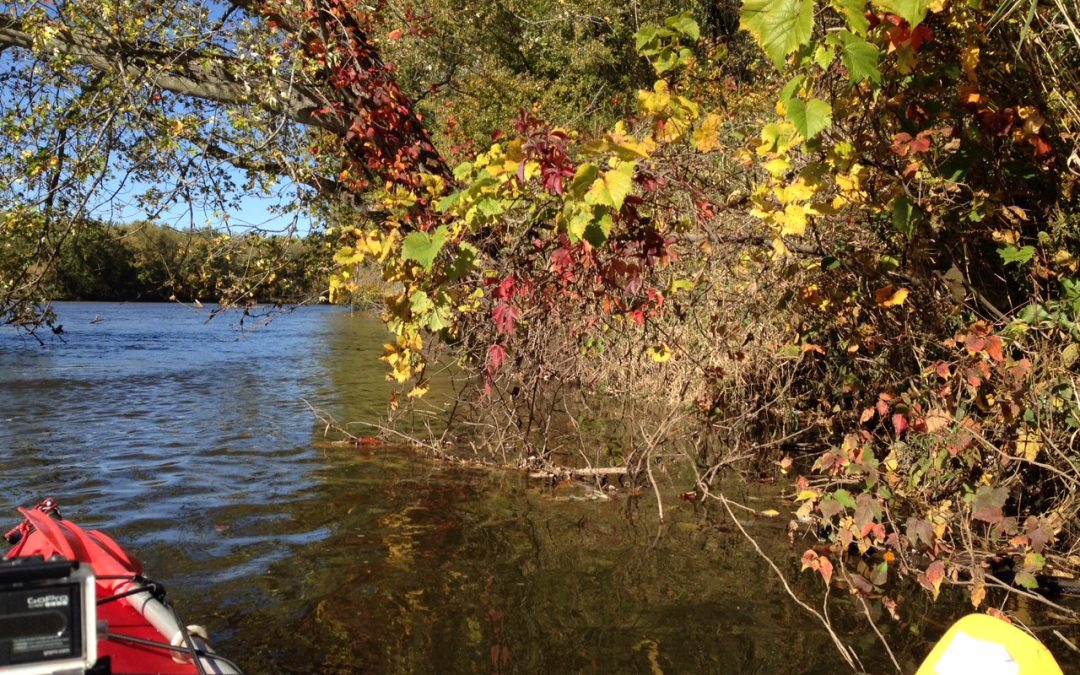 Listen to Ruth tell the story of Day XVI:

This is the October 12 blog. I want to start with a list of towns that I’ve been in so people have an idea about the route of the Wisconsin River. The closest town at the start is Land O’Lakes, although the river actually starts in a lake called Lac Vieux Desert, which is on the border between Michigan and Wisconsin. From there the river actually flows north and west for a while and then eventually heads south. The first town is Eagle River, then Rhinelander, Tomahawk, Merrill, Wausau, Stevens Point, and then I came down into the Wisconsin Dells, Portage, Prairie du Sac, Sauk City, Spring Green, Lone Rock, Gotham, and Muscoda, which is where I arrived at the end of the day today.

One of the things that people had talked to me about before I started the trip was the prevailing winds when you hit the Lower Wisconsin. The Lower Wisconsin River is officially a state riverway from Prairie du Sac down to the confluence with the Mississippi at Wyalusing State Park. The river basically runs east to west, it kind of takes a turn after coming straight down the middle of the state, and goes for about 95 miles. As soon as I made that turn, I started hitting the prevailing winds and Lake Wisconsin was really rough, that was on Saturday. Then on Sunday I was able to float a side channel and avoid most of the wind, but today on Monday, I was going right into it. The forecast had been for winds around 22-25 miles per hour. The morning was great, a beautiful paddle down to Lone Rock, sunny, very little wind and I took a lunch break on a sand bar, noticed there was water in the boat. There was a little wind, so I was somehow getting water in the boat again. I emptied it out, turned the boat upside down and drained the water out of the drain holes that are in the tip of the bow and the stern and kept going. And then by about 2 p.m., I had water breaking over the boat and gusts of wind that I’ve been told now were up to 35 or 40 miles an hour. The sky had clouded over, so it was grey and windy. I did sneak behind a few islands or sand bars, but it got to the point where the wind was actually picking up the sand and blowing it through the air and there were little whitecaps on the water. I thought to myself, “this isn’t fun anymore.” So I called my River Angels. Jeb Barzen and his wife Barb had hosted a wonderful potluck for staff and neighbors the previous night at their house, which was wonderful. Jeb came down, picked me up and took me to Muscoda in the truck. I figure that was about 8-10 miles that I would have had on the river, but I don’t think I would have made it here in time, so thank you to Jeb and Barb for hosting, and thanks for the ride to Muscoda.

During the day I had an opportunity to talk with the Crawford Stewardship Project and Forest Jahnke and learned about the work they do. They like to raise awareness about sustainable communities, sustainable agriculture and local conservation. They’ve been involved in many projects having to do with high-capacity wells, citing of large animal operations and also siting of frack sand mines. Their group is part of a larger network across the state and also across the country that is working on local conservation issues that affect local communities. Thank you to Forest for the work he does. They worked with others to educate the public about a frac sand mine near Bridgeport, which eventually did go in, although they were able to provide through a legal process some constraints on the operation. In Crawford County, though, almost all of the towns have adopted some kind of local ordinance so that there can be some regulation of frac sand mines. This has been an air and water quality issue throughout Western Wisconsin. The old traditional gravel pit regulations just were sort of outdated for what’s necessary with frac sand mines just because they have a lot of truck traffic and there’s air quality concerns when you’re talking about sand. It was interesting to learn about the Crawford Stewardship Project.

I ended up in Muscoda with some good friends meeting me here, Mike Mossman and Lisa Hartman, and they had just come off a Natural Resources Foundation field trip the day before on vultures. Lisa has an educational bird that cannot be released and she does many, many public presentations. Uncle Buddy is a wonderful bird and she brought him to the field trip at Devil’s Lake State Park on Sunday. I know that our Foundation members had a wonderful time watching the vultures come in to roost Sunday night. It’s another one of those spectacles of nature, learning about vulture natural history, doing a little bit of hiking and then getting to meet a vulture in person. One of the very, very special things about the Natural Resources Foundation are the field trips that we offer to the public and to our members to directly meet the experts in their field and to learn about places and species and some of the wonders of nature, like the vultures roosting at Devil’s Lake in the fall. We really appreciate our members and we know they really appreciate the field trips, so this is a bit of a shout-out to all of our field trip leaders, there are hundreds of them, and each year thousands of people go on our field trips. Without that, no one would ever know that the Foundation even exists. Here’s to the wrap up of a wonderful 2015 field trip season and many more in the future.