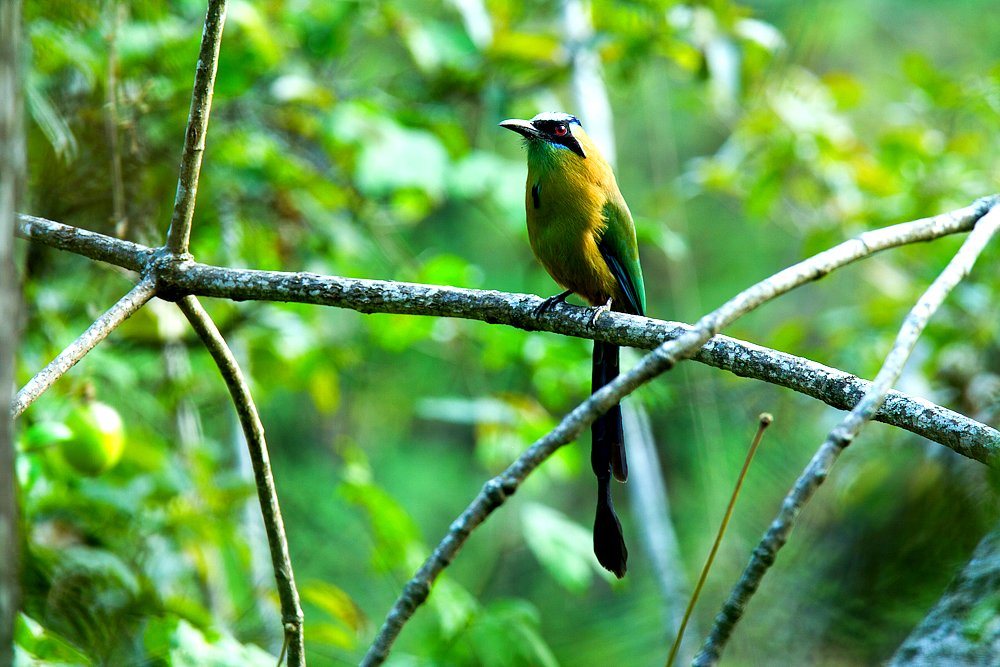 Foundation Executive Director Ruth Oppedahl and a group of Foundation members traveled to Belize. Together they explored birding hotspots, learned about community-based conservation efforts in Belize, and ventured into the country’s myriad habitats, including wetlands, Caribbean cayes, primary rainforest, and pine savanna.

Below Ruth shares her observations from the adventure.

Floating down the river near Pook’s Hill Lodge, giant philodendrons vines hang over me like a beaded curtain. We are in the mountain jungle of Belize. We push our inner tubes up the river, turn around at the rapids and float down.

This forest was preserved by Svea Ward who bought 7,000 acres in the mid-’70s to protest the forest from being logged for its valuable teak and mahogany trees. When we drove in, we crossed from open agricultural land with tree plantations, to a primeval jungle with giant cohune palm, kapok trees, fig and breadnut trees; a tunnel of green towering over us. Ward gave most of the land to the government, which created the Tapir Mountain Reserve. We have not yet seen a tapir (the national animal of Belize, which is quite rare), also called the “mountain cow,” a large solitary mammal.

We have, however, seen the other charismatic species like the black howler monkey. Last night, their lion-like roars echoed across the mountainside carrying for miles along the valley. Before I left Wisconsin, I read Wisconsin-resident Dr. Rob Horwich’s book A Belizean Rain Forest. In the mid-80’s Dr. Horwich came to Belize to study the monkeys. The species locally known as “baboons” is only found in Mexico, Guatemala, and Belize and are rare due to habitat loss and hunting pressure. Dr. Horwich encouraged more than 100 landowners to commit to shared management goals to benefit the monkeys. He followed the lead of Aldo Leopold, who had created a similar agreement among neighbors of the sand country surrounding his shack on the Wisconsin River. Dr. Horwich and the communities along the Belize River created the Belize Baboon Sanctuary.

Instead of government locking people out of the protected areas, community-based conservation looks for ways that people and wildlife can flourish together. The threats of poaching and habitat loss are diminished, and in this case, 25 years later, eco-tourism has grown as an important part of the local economy.

I loved hearing the howler monkeys calling across the mountain valley at night, even if it meant losing some sleep! Their roaring reminds me that wild areas still exist in remote corners of the world, including the mountains of Belize.

Inspiration from the Belize Zoo (Photo by Ruth Oppedahl)

Tropical forests have layers and layers of plants that live on one another. The strangest epiphyte I’ve ever seen is this cactus that lives on trees in the savannah landscape north of Belize City. (Photo by Ruth Oppedahl)

Wood thrush, catbird, yellow warbler, Northern cardinal were all birds I saw in one day in Belize. Sounds like Wisconsin in the summer, but it was Belize in February! One of the most interesting things I noticed on our NRF trip to Belize is the sheer number of Wisconsin birds that are here during our winter season. More than 114 Wisconsin bird species have been seen in Belize. We call them “our” birds, but they belong just as much in Belize.

These neotropical birds are lucky. The part of Belize we have seen in Crooked Tree Sanctuary is a healthy place to winter. Clean water, savanna, and secondary forest provide good habitat. There are no industrial palm tree plantations or huge cattle ranches. In this area, many people are unemployed. Small rice farms and vegetable growing is done on a family level. So the wild areas intersperse the village of Crooked Tree.

Today we met Steve from the Belize Audubon Society and heard about how the community of Crooked Tree (pop. 1,000) is part of the Sanctuary. He and other staff are very involved teaching in the school about organic gardening and medicinal plants. They also help with transportation in times of emergencies when the road is flooded and residents need to get to their jobs or schools in Belize City.

Nonprofit organization Belize Audubon Society has responsibility for managing the large nature sanctuaries in Belize. Their model integrates the community into their conservation efforts, rather than removing people from the protected area. The three staff members also maintain trails and boardwalks, and provide law enforcement for hunting in the Crooked Tree Sanctuary.

The symbol of the Sanctuary is the Jabiru stork a magnificent 4- to 5-foot-tall bird with an 8-foot wingspread. They are just now nesting in the late winter months. My predecessor at the Foundation, Charlie Luthin, did field research on Jabiru storks and contributed to the knowledge about their lifecycle between Mexico and Belize. This is a bird you will not see in Wisconsin!