Meeting up with Ruth on the river 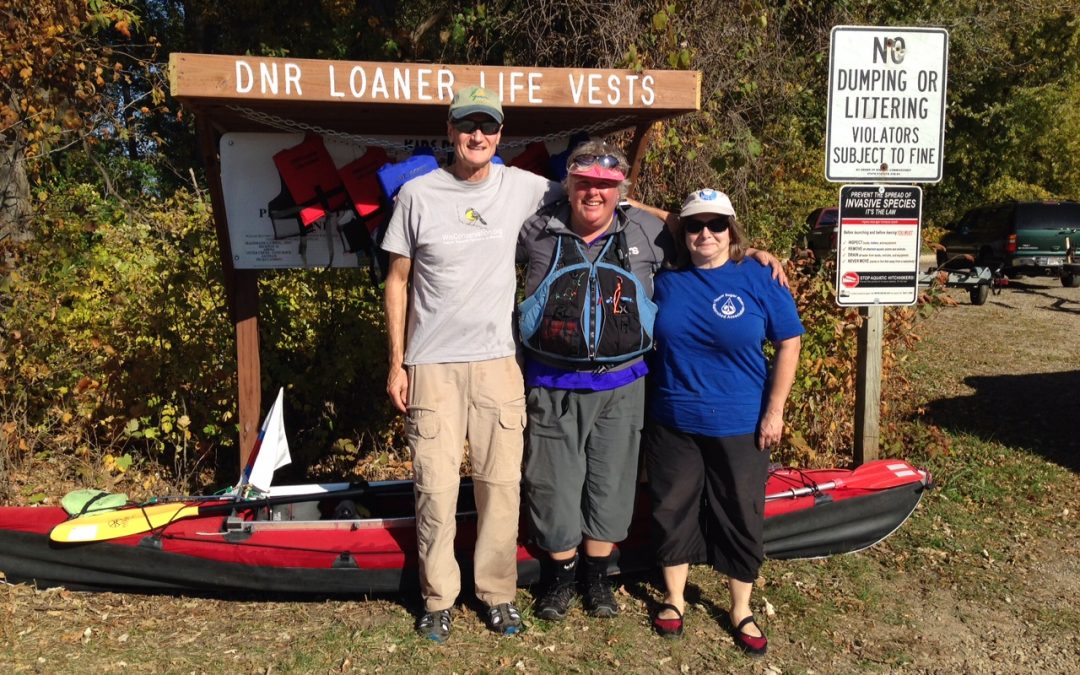 How to meet up with Ruth on her extraordinary journey?  We decided that the only day possible was Sunday the 11th. Next step was to email the NRF office and Camille, who got the word to Ruth that we would join her in Arena.  Once we received the password to follow her GPS, details on how Lisa and I could meet Ruth on her paddle needed to be worked out. We had to plan the shuttling of vehicles so that our arrival in Arena coincided with when Ruth would arrive. Ruth called about 7 a.m. on Sunday morning stating her concerns about the wind and how her plans may change.  Tracking her location on the computer definitely helped, but she moved quite quickly, and later we were to find out that Timm Zumm had assisted her on her journey by power boat in order to meet a reporter earlier that day.

This reduced the time Lisa and I had planned to shuttle and meet up with her.  We dropped off the kayaks at Arena and locked them up. Dropping off one vehicle at the Spring Green bridge we headed back to Arena. Approaching the city limits, still having data service, I looked up Ruth’s location and she was within the range I had hoped to already be in the kayak. On arrival I could see Ruth on the sandbar with Timm, and as we prepared our kayaks, Ruth ate her lunch at the Arena landing. The sand bar at the landing area had grown from the last time we had taken this path. There was still a shallow channel that allowed us to take off without having to go across the sand bar where Ruth had parked her kayak alongside Timm’s powerboat.  Three other kayaks followed us through this channel and they would be near us most of the rest of the day.  Following this path, we met Ruth at the end of the sandbar—she and Timm had walked to their boats while we had pushed ourselves through the shallow water.

Shortly after taking off, an eagle flew over and with the sun out and the Packer game on my radio, I knew it was going to be a great day. Timm stayed with us for a short portion while I talked with him about Ned, another member of FLOW and a former coworker of mine. Timm turned his boat around and sped away as we entered into a slough on the eastern side of the river. We would use the slough to protect us from the rising wind as he would return to Prairie Du Sac so that he could then meet us at Spring Green.  I was out in front and tried to pick out the deepest path through the sloughs and never had to leave my kayak, but Lisa had to get out twice and Ruth a few times as her kayak was sitting lower and her keel kept digging in. Feeling bad that I could not find a better deeper path, at least it gave Ruth a chance to stretch her legs every once in awhile.

Being in front, I got to see a bit more of the wildlife. A flock of turkeys (eight) came down the bank and walked out on the sand. Each one would get their feet wet and then take off and fly across the 50 feet of open water to land on the bank that was at least three feet higher on the other side. Watching turkeys take off and fly is always an amazing event. Sort of like watching me try to dance some new way and looking awkward all the way.

The opposite of awkward is the movement of cranes and we had the opportunity to see a few in the shallow waters as they passed across. Deer were also part of our day and we interrupted their peaceful drinking and lounging a couple of times.  Cabins along the river edge provided another bit of different scenery besides the numerous types of birds that were making noise along the path.

The view changed as we left the sloughs; the waves increased and the going was a little tougher.   Talking to fishermen along the bank as they were casting into the rough water, they told us they were not having a good day. Taking on the waves and passing under the railroad bridge, we reached the boat landing where Timm was waiting to meet us.  After a few pictures and loading the kayaks, we took off for another stop. Timm introduced us to a couple, Doug and Sheryl Jones, who have monitoring wells on their property for nitrates. They have a slough covered in algae and are active in trying to inform people of this problem and the dangers it brings to those whose drinking water that has not been treated. They also have a very nice prairie that they had put into a conservation easement.

Next it was off to a potluck at Barb Barzen’s home, a coworker of Ruth’s. Her house was at the top of a winding steep driveway. We met her husband Jeb and her son Jake. While we were enjoying the outstanding view from her deck, Ruth took a shower. The next stop was at a friend’s of the Barzens’ whose home looked out over the Wisconsin River. Jeb set up a couple scopes and had extra binoculars as we, and a few others, watched up to 800 cranes land and get ready to spend the night on the river.  This was the most cranes I had ever seen at any given time. It was explained to us that the cranes like to sleep standing in shallow water as it is hard to sneak up in the water without the crane hearing or feeling something is wrong. Jeb informed us that this stopover location for migrating cranes will peak in the next few weeks with up to 3,000 cranes a night gathering here before continuing their journey south.

As dark descended, we returned to Barb’s house and joined the large gathering of well wishers for Ruth.   I had the opportunity to learn how to skin a turkey as James, a friend of the Barzens, had just shot one and was cleaning it in the garage. Instead of fresh turkey, we were treated to grilled brats and burgers.  After gorging on food and enjoying the conversation of many, we left for home.  Turning cars around and getting out of the crowded parking area gave many a challenge to end the night.

We stopped and picked up our car at the Arena landing and made it home safely, even though a car had gone through a traffic circle the wrong way. If I had not been turning right, he would have hit me head on. It was a fabulous day and it was great we were able to join Ruth on her trip to help promote the conservation of Wisconsin’s natural resources.