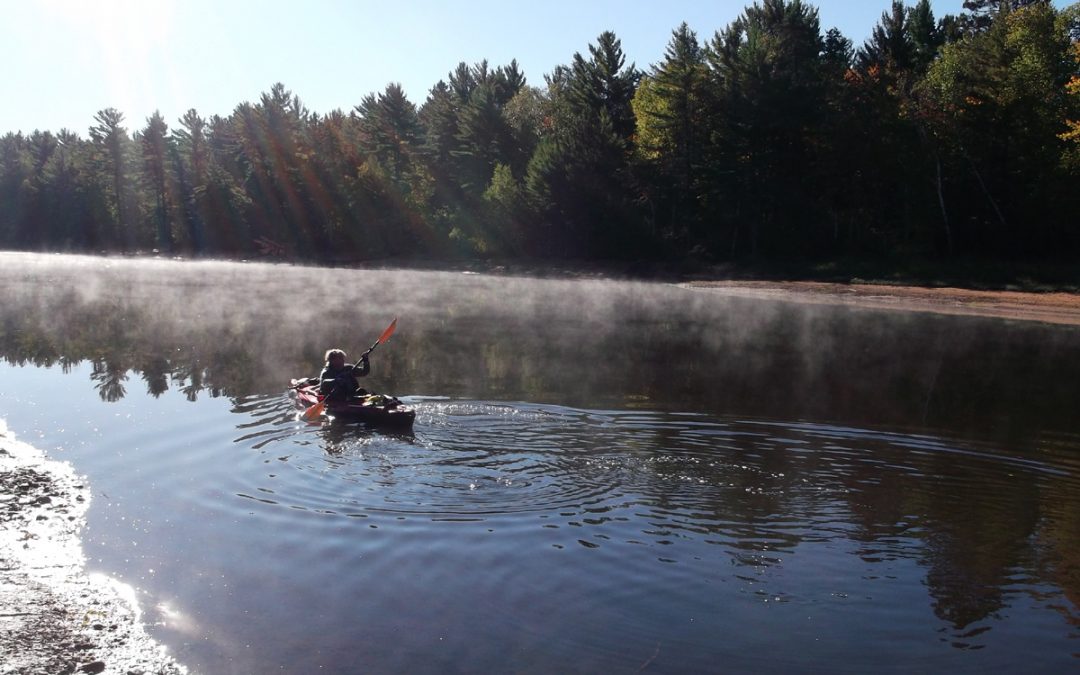 All my life, I’ve walked through the woods and imagined what it would have been like to do so long ago. What would a Winnebago Native American see from atop this hill? What potential did Wisconsin’s first fur traders see in this stream or that lake? Richard D. Durbin, professor emeritus of UW Madison’s Plant Pathology Department, does the same thing when it comes to paddling down the Wisconsin River. In his book, The Wisconsin River, he writes that the river “takes you to a time past, providing a window into a bygone era while at the same time reflecting images of our current age.” I had the privilege of talking to Professor Durbin about the river and how he connects to it. His favorite daydream as he paddles? He likes to be Louis Jolliet, the first white man to boat down what was then known as the “Great River” in search of a water route to the Pacific in 1673.

He could easily have chosen a number of individuals from times long past. He could have been a tourist from Chicago or Pittsburgh, coming to Kilbourne City by rail after seeing Henry Hamilton Bennett’s photographs of the spectacular rock formations. The river, and the way it cut through the Cambrian sandstone, made what is now known as Wisconsin Dells the state’s most popular tourist spot in the mid nineteenth century. Or maybe he could have chosen to be a Welsh immigrant with expertise in mining, who was drawn to the large lead deposits near Mineral Point. Lead mined there was either made into shot in Spring Green to be used around the state, or it was shipped down the river and on to destinations throughout the country and Europe. Almost all the lead used in the United States at that time came from southwest Wisconsin, and made a journey down the Wisconsin River at one point or another.

Professor Durbin could have also been one of the many lumberjacks, perhaps a Scandinavian immigrant, who ventured north along the Wisconsin River to find vast forests of pine. The river was pivotal in moving the lumber that came out of northern and central Wisconsin. Logs would be shipped down to mill towns where saw mills on the river would turn them into lumber. Then, the lumber made its way further south along the Wisconsin and Mississippi Rivers to St. Louis and, often, west from there. The lumber industry, literally driven by the force of the river, determined how and where the state’s economic development would occur. Mills became towns, which attracted railroads and eventually became the cities along the river we know today: Stevens Point, Wausau and Rhinelander to name a few.

Perhaps Professor Durbin could have stepped even further back in history to look through the eyes of a French trader, trapping in the upper Midwest, storing his wealth of pelts at Prairie du Chien, and finally shipping them south along the Wisconsin and Mississippi, sometimes as far as the new French settlements in Louisiana. Or, one of the Native Americans who lived off of the river’s ecological richness and traded on it between the Great Lakes and the Mississippi River Basin. Professor Durbin could have even been the giant serpent spirit who, in Native American legend, created the river as he travelled from “Big Lake” to the sea.

The Wisconsin River has meant many things to many people throughout history. Its importance to the area’s economic development is stamped across the state today: in the cities and towns that would never have been without the river, in the transportation networks that arose between those cities and towns and the agriculture that developed around them, even in our state’s name. In more recent history, the river has been turned to paper milling, power plants and recreation. While there are heavily industrialized sections of the river, especially in central Wisconsin, Professor Durbin pointed out that there are places along it that have changed very little since the 1600’s. “Wonderfully peaceful” places where it is easy to get a different sort of perspective on life and to connect to those who have paddled the river before.

Ruth paddles in one of those “wonderfully peaceful” sections of the river. Photo credit Bryan Pierce.

Not only have our state’s natural resources been pivotal in its economic development, but they have the ability to connect us to historical times and historical people. Ruth shared in her Day XII blog post that as she kayaked through the narrows of the Upper Dells, she could imagine the difficulty of floating lumber down that stretch of river in times past. Where and how do you feel most connected to the history of Wisconsin’s natural resources? Is it kayaking down the Wisconsin River or another waterway, cross country skiing deep in the woods or picking flowers in a restored prairie? Perhaps it’s when you see ancient burial mounds or stand atop a bluff. Comment on our Facebook page or tweet us to share how you connect to history through nature.