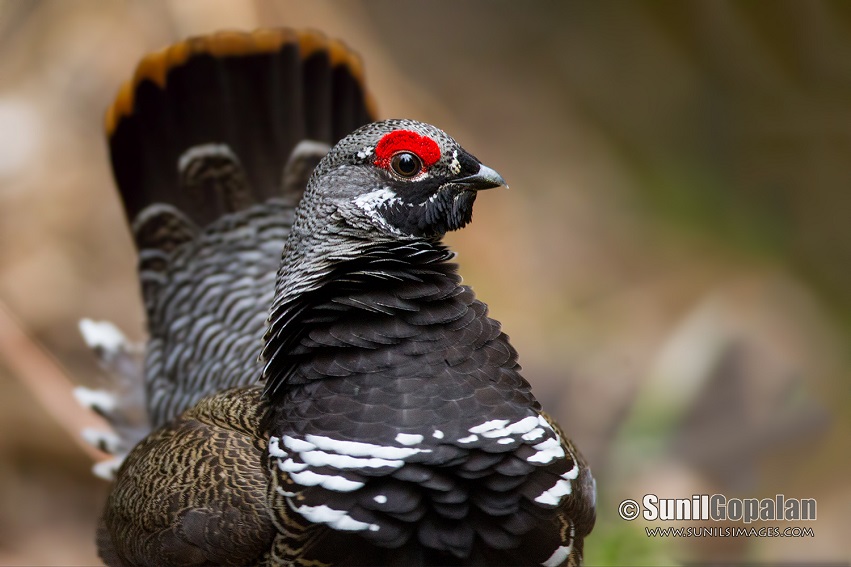 I had been eyeing the NRF field trip to seek out the elusive spruce grouse since I first heard of it being offered last year. The spruce grouse is one of those secretive species that makes you work for it and even then, it is mostly sighted along roadways picking at grit. The field trip offered a chance to find the bird displaying in its breeding regal finery. Field trip leader Ryan Brady is well known to most Wisconsin birders as an authority on our birds, bird conservation and a generally fun guy. So the trip promised to be entertaining even when we weren’t in the immediate presence of spruce grouse.

This trip is held out of Clam Lake in northeastern Sawyer County. It would be a roughly five-hour drive one-way from my Madison home and I decided to break up the travel overnight by staying at Clam Lake Junction, which offers great accommodations right inside Chequamegon National Forest. A drive into the northwoods of Wisconsin is always exciting once you get away from the monotony of the interstate. The quiet roads, and sparsely located townships give a great preview of the natural setting of the forest at the end of the road. As dusk fell I managed to pick out several birds right from the car, including an American woodcock that flew over me in display flight and a great blue heron seen in silhouette.

The next morning, all the field trip participants met at our rendezvous point at 6 a.m. to the auspicious drumming of a pileated woodpecker. After some hellos to familiar friends and introductions to new ones, we set off on a five-minute drive to the first of two locations where we would look for the spruce grouse. The morning started a little chilly as we set out on foot into the bog. Ryan explained what we were seeking to hear to determine the direction in which to go and some sharp ears soon picked out the sounds of the flutter flight of the male bird over the chattering of squirrels. After some bush whacking, we were near a small clearing where it was displaying. Everyone approached and set up quietly near the spot and the bird went on with its display paying absolutely no mind to us. It was coming down to the ground near us, strutting about and then flying up to a favorite perch—very predictably. Everyone got great looks and we could hear the female it was seeking to attract and a second male in the distance.

After having observed this bird for a while, we made our way back to our cars with a promise from our leader that our next stop would almost certainly involve multiple birds. The morning was warming up a little by the time we pulled up to our second stop of the day. Off a forest road within the forest, we set off into another bog, which held a promising habitat for more spruce grouse. We could hear other birds such as yellow-rumped warblers, golden-crowned kinglets, red crossbills and evening grosbeaks in flight and in the trees around us. An American bittern was pumping in the distance. After some more walking through the wilderness, we once again heard the distant flutter of a displaying male. We got it in view rather quickly and once again set up around a clearing where the bird showed off for awhile. The photographers amongst us were thrilled as the bird approached our location several times—sometimes too close for my lens to even focus on it! This was followed up by locating another displaying male close by, which allowed me several angles to make my images.

After the grouse were gone, we spent some downtime in the wilderness talking about birds, habitat loss and conservation. The trip was rounded off with a customary group photograph—and we said our goodbyes. It was a wonderful way to spend a great spring morning in the northwoods of Wisconsin.

Find other images from this outing on Sunil’s website.