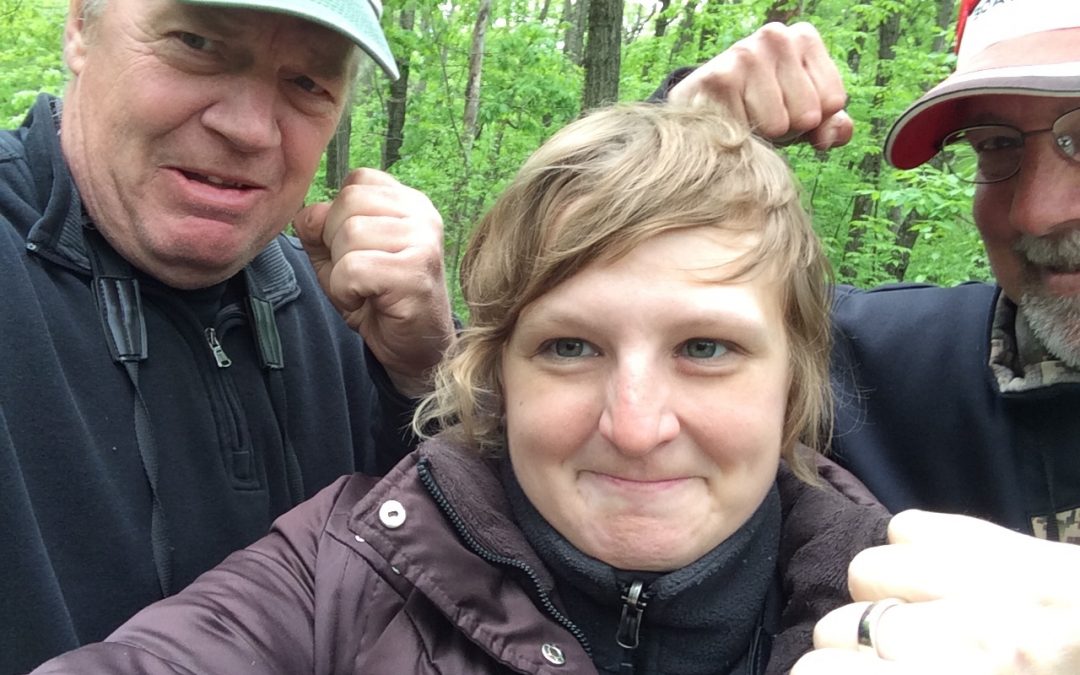 It is 4 a.m. and I’m standing in the middle of an empty Wisconsin road waxing philosophical through chattering teeth with two of Wisconsin’s best birders. We’re listening for different species of birds and talking about Aldo Leopold, specifically his fondness for sitting outside this time of night, communing with the birds during their beautiful dawn chorus as they welcome the morning light of the new day. One of the two birders, Randy Hoffman, will later write this of the moment, punctuated by a shooting star, in our birding report:

“Discussion while standing in the early morning twilight and 23 degree temperatures warmed the spirit. The human experiential element of conducting Big Days was enriched by thinking about Leopold. His description of the ‘dawn chorus’ and its implied requirement to experience it for a deeper understanding of the natural world was a personal enriching moment for the participants.”

I would be lying if I said I hadn’t seriously questioned my own sanity ahead of this Big Day event. I’ve never paid much attention to birds, spending most of my time looking on the ground for frogs and turning over rocks and logs in search of salamanders. So it was hard to say what possessed me to volunteer—yes, that’s right, volunteer—to spend 24 hours straight birding with Curlew & Screech, the Great Wisconsin Birdathon team that holds the state Big Day record at 230 species and is today competing against Cleopatra & the Stilts, both for number of species and dollars raised for bird conservation. My commitment to the Big Day was put to the test a week ahead of the event, when the second birder, Al Shea, wrote to let me know that we wouldn’t be stopping for bathroom or food breaks, adding that I should plan to wear layers, but not a jacket that would make noise and scare the birds away.

It takes more than cold weather and a night awake to keep me from a great story, however. I showed up at Token Creek Conservancy in De Forest at midnight May 20 and got into a truck with two strangers I wouldn’t even be able to see until dawn, with my binoculars, caffeine (lots of caffeine), layers of clothes and cooler full of food.

And then we were off.

I feel a little bit like I have been welcomed into a sacred space. Al and Randy, both former Wisconsin DNR employees, have been doing big days together since the ‘70s. Randy was introduced to birding while he was working for a trucking company and one of the truck drivers started to talk about the ducks on Lake Monona. Randy started carrying around a pair of binoculars after that and one day noticed a bird in the bushes. It turned out to be the yellow-rumped warbler.

“Here was this little thing, four or five inches long, an ounce maybe in weight, with all these beautiful striking colors, that I knew absolutely nothing about,” Randy says. “It really struck a chord with me and I wanted to learn more and more birds.”

Al’s interest in birds coalesced over the course of many years and experiences. His mother was a backyard birder with a deep appreciation for birds and he was able to share this love with her. In high school, he became interested in duck hunting and had to learn to identify the species. In college a dorm-mate was an outstanding ornithologist who showed Al his first bird book and took him out on his first Christmas count.

For all these years this duo has been perfecting their route, fine tuning their skills and developing a nearly full-proof strategy to reach at least 200 species over a full day. Today we’re following their usual path, the one that earned them the state record in 2002. It starts in Sun Prairie, goes through Dane, Columbia, Marquette and southern Portage, over to Wood County, back down to the county line between Jackson and Juneau Counties and then ends at Horicon Marsh, ultimately making a “Q” shape and covering nearly 450 miles. This route focuses on nesting species, rather than migrants, so we’re primarily visiting wetland areas that cover the northernmost breeding range of southern species and the southernmost breeding range of northern species.

The birders don’t use GPS, just a map and their memory. They map out where to go, how long to stay and the likelihood of seeing a species. Then they stick to their planned route and don’t “chase the siren call of a rare bird and waste a precious hour,” Al says. They know which species sing only intermittently and spend their time in any given place accordingly. Their strategy depends on what they call cutoffs: the number of species of owls, wrens, warblers, waterfowl and others they know they have to reach in order to get to at least 200 birds today. If we only get 20 warbler species, for example, we won’t make 200, Al tells me, adding that a good versus great final list is the incremental difference in these lists of species families. When they broke the record in 2002, a massive migration took place that night, giving them 27 warbler species by 7 a.m. By 9 a.m. that year they knew they were already well on their way to a state record.

I understand almost immediately why we don’t take bathroom breaks or stop for meals: this is extreme birding. We stop at one spot, get out of the car, listen, listen, listen for about three minutes, then hop back into the car and dash off to our next spot. At one stop Randy calls out to a long-eared owl, who calls back within a minute, participating in what Randy says is a “friendly little chat.” At that same stop, we hear the “tick tick” of a yellow rail just feet away, and Al tells me I’m one of the only people in the state to observe this species. And at another stop, a barred owl calls so close to where we’re standing that I wonder whether he sat there waiting just for us, making sure he made the list. By 2:30 a.m., we’ve already found every target nighttime species, including short-eared owl, yellow rail, American woodcock, Henslow’s sparrow and red-necked grebe.

When the sun is fully up around 5:30 a.m., the bewitching hour is announced through the drumming of ruffed grouse and a cacophony of noise from killdeer, oriole, goose, house finch, goldfinch, eastern kingbird, grosbeaks, hairy woodpecker, yellow-throated vireo, morning warbler and indigo bunting. Al and Randy bring different strengths but operate almost as one, simultaneously drawing their binoculars to get a closer look at a bird they spied at the same moment. This isn’t the only time I’ll see them respond in unison: later they’ll hear a hooded warbler out the car window and simultaneously exclaim “there you go!” and point. They’ll also whoop and point together when we finally see a Cooper’s hawk later in the day. There is a certain thrill in these exclamations that seems to harken back to boyhood joyfulness. Al jokes that someday the duo will be doing their Big Day together in wheelchairs, counting cardinals and house sparrows.

Although I can’t tell a sparrow from a swallow and just assume every tweet I hear comes from a robin, it was still evident that Al and Randy are pros. Though they try at different times throughout the day to get me to hear the “teacher, teacher, teacher” of the ovenbird, or the “bee buzz buzz” of the golden wings, or the “pee-wee” of the, well, pewee, I spend my time listening generally to the birds. They spend their time listening for the birds—or for the sound their wings make overhead at night.

“Birding is about depth of hearing,” Al tells me. “You’re like a single player in a symphony who has to hear one sound, his own sound, but also the whole orchestra.”

The rest of the day continues in much of the same way, mostly through strategy, but also a little bit of seeming serendipity. We drive to one place in Cranmoor Bogs to try to listen for a goshawk…and it calls within two seconds. Al makes a comment about how in a perfect world we’d already have loon, kingfisher and harrier on the list when, lo and behold, we see a kingfisher.

By 11 a.m. we have checked off enough woodpeckers and wrens to get us to 200 species by the end of the day. By noon we’re at 165 species total. We stop on the places mapped out and roll our windows down to hear what we can while we’re on the move. During the full trip we stop at least 50 times. Randy and Al even know where to find the birdfeeders that attract the species we haven’t yet found. The caffeine helps keep me awake, sure, but it is the enthusiasm and passion of these two men that keeps me enthralled.

By the time we get to our last stop of the day, the Horicon Marsh auto tour, we have already gone beyond the 200 species target with a list of 209 species. The previous second-place state record was 211 and I eagerly ask Al and Randy if they think we can beat it. We do–and then some. A peregrine falcon swoops out in front of the truck for number 212, followed by a great egret (213), greater yellowlegs (214), solitary sandpiper (215), common gallinule (216), black-crowned night herons (217), and herring gulls that seemed to come from nowhere (218). Then, just as Al is about to tell me that that’s it, the show’s over, a northern harrier cruises by and lands to roost for the night.

That’s 219, the second-highest total species in Wisconsin birding history. That’s also more than the other team, Cleopatra & Stilts, who end the day with 191 species. Only two target species eluded us during the day: the Kentucky warbler and the snowy egret. And Al and Randy heard only one species, a warbler, that they weren’t able to identify. As a birding neophyte, the success of my first big day will look a little dubious on my resume.

As we start our delirious trek back to our cars, which will take us home for the foreseeable Big Sleep, it is getting dark again. It is not too long until the next dawn chorus will crescendo and the natural world will awaken even in the deepest of our slumber. And when it does, it is of this mad adventure—the kind that stirs the soul and reveals a new kind of world—that Al, Randy and I will be dreaming.

To follow the friendly trash talk between the two teams throughout the day, check out the Foundation’s Storify page.