Traveling through time with the UWM weather station 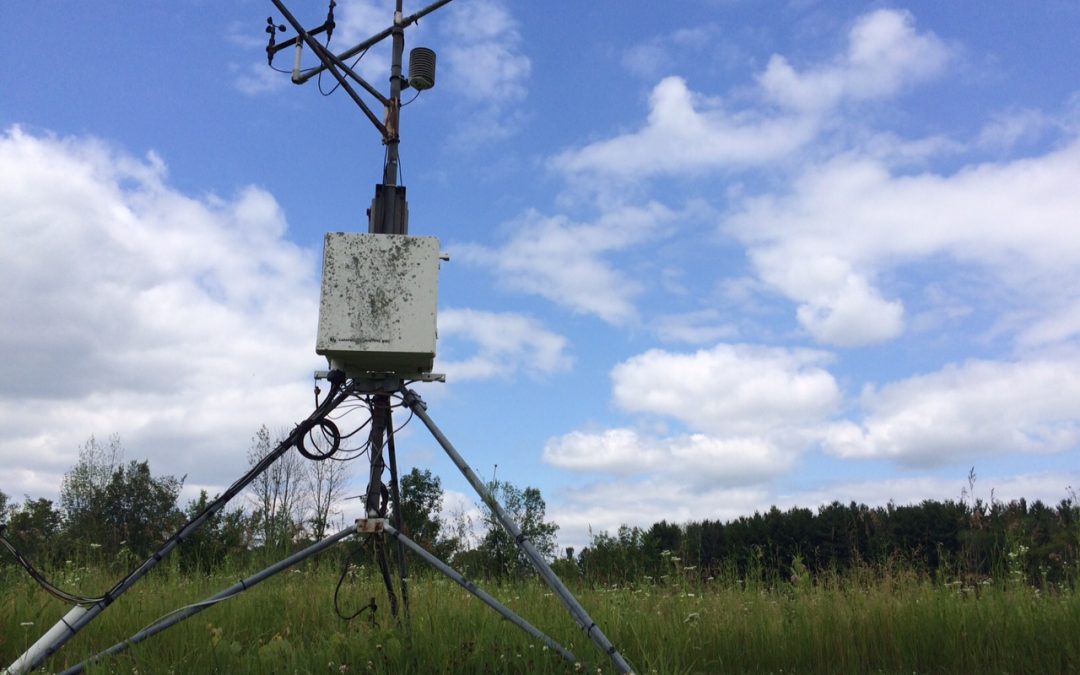 Cedarburg Bog State Natural Area is special for many reasons. It was the second place in Wisconsin to receive the state natural area designation. It is the most intact large bog in the southeastern part of the state. It contains what is likely North America’s southernmost string bog—a bog with stunted cedars and tamaracks that alternate in a unique pattern with wetter areas and sedges.

And, since 1989 it has been home to a time machine, better known as the weather station of the University of Wisconsin-Milwaukee Field Station. The weather station collects electronic data on local temperature, rainfall, solar radiation, wind speed, wind direction and humidity, and is helping researchers look back in time to make predictions about the effects of climate change into the future.

“A big part of what we do is collect long-term datasets that can help us understand changes in the environment,” Field Station Manager Gretchen Meyer told me when I visited the Field Station earlier this month. “As the climate warms, the plants, the insects, the birds, all the animals, are dependent on temperature and they all time their activities so they’re doing things at the right time. Climate change will cause changes in phenology.”

For example, UW-Milwaukee researchers Peter Dunn and Linda Whittingham were among the first in the country to publish a paper based on Field Station data showing that tree swallows are laying their eggs earlier as spring has gotten warmer. They used the data to look at the correlation between temperature and rainfall and when the swallows laid their eggs. This is just one of a number of tree swallow phenology projects the pair is working on using Field Station data to determine how temperature and other environmental variables affect the timing and success of breeding swallows.

“The field station is important because we can put up nest boxes for the birds that are not disturbed, and the station has highly detailed weather data for studying environmental correlations,” Dunn said. “So it would not be possible to do our 18-year study without the help of the station.”

Since 1970, researchers using data from the Field Station have produced 343 scientific publications and 146 theses. But in 2014, Meyer and Field Station Director Jim Reinartz realized they could have a problem. The datalogger, which was purchased in 1989 and records the data coming in from at least 14 different sensors, was becoming obsolete to the point that if it malfunctioned, the company that developed the technology, Campbell Scientific, wouldn’t be able to service it or provide a back-up. So Meyer and Reinartz applied for—and received—a C.D. Besadny Conservation grant from the Natural Resources Foundation of Wisconsin to purchase a new datalogger.

“The datalogger is the heart of the whole thing,” Meyer said. “I can’t begin to tell you how essential this was. If anything happened to the old one, we would have been out of commission for weeks, if not months. Now the whole system is going to be much more reliable and much easier to fix if something goes wrong.”

Meyer showed me the different components of the weather station, including an anemometer to measure wind speed and wind direction; a weighing bucket rain gauge; soil temperature probes; a Bowen ratio system to track changes in temperature and humidity on a very small scale. Each month Meyer uploads the data and makes it publicly available on request. What makes the weather station especially useful, Meyer said, is that it is set up near three state natural areas: Cedarburg Bog, Cedarburg Beech Woods and Sapa Spruce Bog, giving researchers the opportunity to focus on the changes in these special protected areas.

UWM researchers Emily Joynt and Weon Shik Han are using the information to understand how groundwater influences how carbon dioxide is transported and produced in Cedarburg Bog SNA, which is essential to hydrology in the area because it moves water from the surface to underground. Wetlands store between 20 and 30 percent of the global soil carbon store, so understanding how carbon dioxide fluctuates in these ecosystems will help scientists predict how wetlands will respond to climate change and disturbance.

“The UWM Field Station is an incredible resource to both the university and the public,” Joynt said. “Its close proximity affords us the opportunity to invest time and funding that would otherwise be spent on travel, to increase our data collection and make repairs and modifications quickly. Additionally, the field station allows researchers from multiple disciplines to work alongside one another and collaborate on their studies.”

Another UW-Milwaukee researcher, Mark Schwartz, is using the data from the Field Station as part of a network of phenological monitoring to better understand how climate affects when trees start to grow their leaves in the spring. When plants start to grow in the spring, Schwartz said, they pump water out of the soil and transpire it into the air—the effects of which the Field Station is able to measure. Most recently Schwartz and team added a “phenocam” to the UWM Field Station site, which will provide yet another measurement to better understand plant greening.

“These changes in the growing season affect the relationships between plant growth, and by extension insect activity, and activities of other organisms using them for food,” Schwartz said. “The UWM Field Station allows me to compare multi-species phenology and detailed energy/water data in a natural setting. This combination of measurements would be difficult to achieve elsewhere.”

When Meyer showed me the Field Station, she also provided me with the data. After spending just a little bit of time analyzing the daily measurements during specific months and over the years, I discovered that:

If April showers bring May flowers, May of 1993 must have been especially beautiful. That April there was more rainfall at Cedarburg Bog SNA than any other year since 1989 at 7.8 inches total rainfall.

Earth Day, April 22, has seen very little rainfall at Cedarburg Bog SNA since 1989. Twenty of those years had no rain at all and Earth Day in 1999 saw the most rain at 1.5 inches.

While it’s fun to manipulate the data to look back in time, Meyer emphasizes the very real implications of understanding the data from the UWM Field Station.

“Weather affects us all,” she said. “It affects our food, it affects our health. It affects what you can do outside, whether you’ll be comfortable outside, it affects the farmers growing your food. If you pay attention to birds or plants, you know that weather is changing. It’s better to know that and to try to understand that, instead of just assuming it’s all going to be the way it was. We all should care about the weather.”