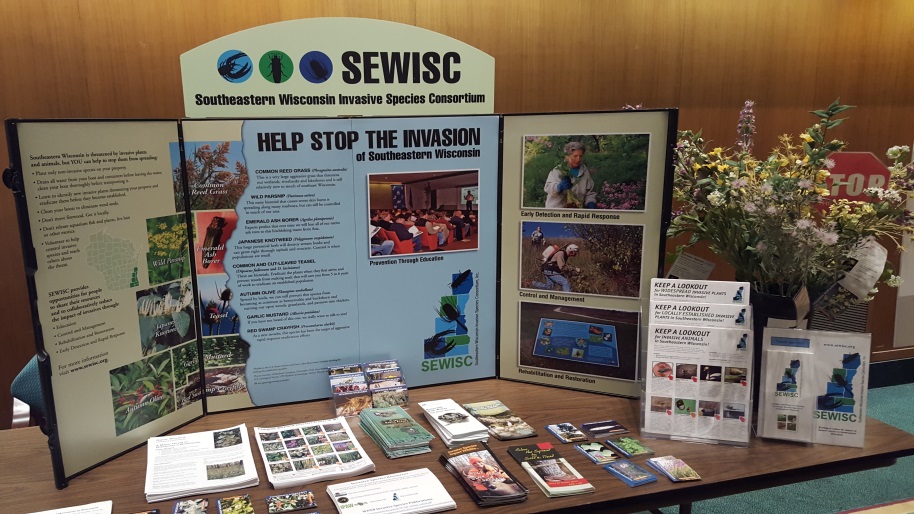 Give the natives a hand

At first glance, it looks like a peaceful grassland. But if you look closer, you will see a battle unfolding. Controlling invasive species is challenging, and replacing those invaders with native species can be a long process. In 2011 the Southeastern Wisconsin Invasive Species Consortium (SEWISC) initiated plans to establish a small native prairie restoration demonstration site on the grounds of Havenwoods Environmental Learning Center in Milwaukee County. Located at a prominent trail head with thousands of visitors each year, the prairie demonstration planting is intended to bring attention to the beauty and value of diverse native plantings. So often, though, native plants must compete with non-native invasive plants. SEWISC volunteers and center staff chose this site for the demonstration planting not only for the high profile setting, but also because the area was plagued with invasive bindweed, quack grass and tuberous sweet pea. We learned what tough customers those invasive species can be.

Our plans were to apply herbicide in 2011 and follow up with native seed and plug plantings over the following years. But the exotic invading plants held such a tight hold on the restoration plot that hand-pulling and herbicide applications were necessary in 2011, 2012, 2013 and 2014. We planted annual cover crops in between the treatments and finally in 2015, we planted native prairie seed. Through the persistent on-the-ground control efforts by dedicated SEWISC volunteers and center staff, we are making great progress. The Natural Resources Foundation of Wisconsin’s C.D. Besadny Conservation Grant Program provided funds for native prairie seeds and continual spot control of invasive species.

Let’s face it. The subject of invasive species is a “tough sell” to the general public. Green is good, right? The idea of plants and animals invading the neighborhood sounds slightly comical to many people, which makes it difficult to gain their attention long enough to explain the issue. But this lack of knowledge leads to the unintentional spread of pest species, which intensifies the problem.

That’s why our table-top exhibit about invasive species is always on the go. It travels to conferences, fairs, libraries and workshops throughout our 8-county region, exhausting the supply of our educational brochures and handouts. Through a generous grant from the Natural Resources Foundation of Wisconsin’s C.D. Besadny Conservation Grant Program, we recently updated and restocked our supply of membership brochures and purchased “Stop Aquatic Hitchhiker” bobbers, which will be distributed to the public to educate them about the need to clean invasive plant and animal debris from their boats after recreating in our lakes. We also distributed ready-to-hang SEWISC posters to nature centers and other public facilities to display in an effort to educate the many individuals who visit their facilities.

Our colorful, life-like bouquet of weeds is what usually draws unsuspecting visitors to our display table, especially during the winter months. “Oh what a beautiful bouquet!” they exclaim while admiring the faux flowers. That gives SEWISC volunteers the perfect opportunity to share the little-known backstory about each exotic plant, revealing their plot to take over our native plant and wildlife communities. Visitors leave our exhibit armed with the knowledge of how they can help stop the spread of invasive species and preserve our native habitats.