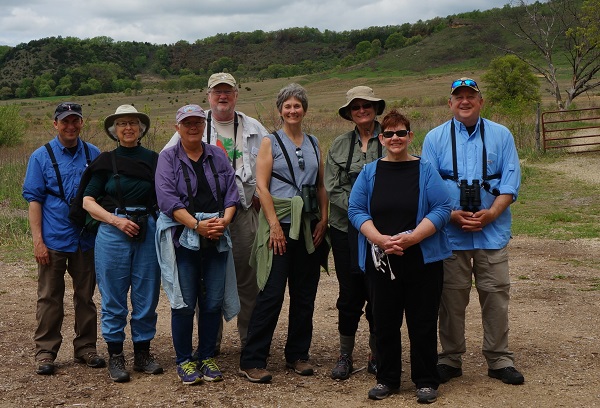 My wife Barbara and I became members of the Natural Resources Foundation of Wisconsin circa 1998. In the years since I’ve had the chance to see the many ways NRF carries out its mission, creating opportunities for its members to see and experience the very best parts of our state while building support for important conservation efforts. Along the way, I’ve had a chance to see just about every side of the NRF—from fundraising to grant making and building partnerships that multiply its impact.

In one of my earliest memories of NRF, we received a “Watchable Wildlife” guide with an early membership and later a State Parks sticker when I renewed at a higher level of support. Years later as an officer of the Wisconsin Society for Ornithology (WSO) I would work with the NRF staff to help create Beyond the Bird Feeder: Creating a Bird-Friendly Yard with Native Wisconsin Plants, written for WSO by Foundation member and former Wehr Nature Center Director, Mariette Nowak. It’s still offered as a membership gift and is a wonderful resource for gardeners and bird watchers.

Early on Barbara and I accepted the Foundation’s invitation to experience the wonder and joy of Wisconsin by taking a Field Trip to see our state’s most amazing wild places and creatures with enthusiastic professionals from the Department of Natural Resources and other expert guides. Such opportunities are still one of the best things about being a member.

We eventually graduated to global exploration on one of the Foundation’s many international travel experiences. These trips introduce travelers to unique cultures and natural places around the world. In addition to seeing beautiful landscapes, flora, and fauna, you get to explore the conservation issues facing those places today. It’s now been more than a decade since we traveled to Costa Rica with NRF Director of Development Camille Zanoni and saw several hundred species of tropical birds. More recently we accompanied former Executive Director Charlie Luthin (director of NRF from June 2003 to May 2012) to Tanzania.

Making a Difference for Wisconsin

As our understanding of the Foundation’s mission deepened, Barbara and I joined its Conservation Steward Society for individuals who each year make an unrestricted gift to help provide the operational support NRF relies on for its core functions. And we were pleased to make a modest contribution to help develop a strategy for seeking the public’s investment in what would become known as the Cherish Wisconsin Outdoors Fund, providing permanent support to care for our State Natural Areas, State Parks, State Wildlife Areas and State Fisheries.

Meanwhile, I had joined the board of directors of the Friends of Cedarburg Bog, the second oldest State Natural Area, just as the group received a Besadny Conservation Grant from the NRF help buy lumber and flotation barrels so volunteers could construct teaching platforms along a boardwalk into the string bog.

In turn, as a National Natural Landmark, a Wetland Gem and an Important Bird Area, the Bog was selected for one of three Great Lake BioBlitzes that NRF staged in 2010. Some 35 scientists and more than 85 citizen-participants joined the Bog Friends to inventory the site’s biodiversity.

The Bog Friends received a WisConservation Award as the NRF’s Outstanding Conservation Partner for 2012, and the following year the group established a perpetual endowment fund through the NRF’s Wisconsin Conservation Endowment that will help support long-term stewardship and preservation of the Cedarburg Bog.

The Bog Friends was just one of many organizations through which I have partnered with the Foundation. Perhaps the one closest to my heart was Bird City Wisconsin, which recognizes communities for their conservation and education actions while working with them to do more. The Foundation, through its Bird Protection Fund, first awarded funding to Bird City in 2012 and has since made it one of its nine priority projects and helped it to recognize 100 communities in Wisconsin and launch companion programs in several nearby states.

The Wisconsin Breeding Bird Atlas II was launched in 2015 with support from the NRF, which added it to the Bird Protection Fund’s priority list. The Atlas is a 5-year citizen-science project that seeks to determine the distribution and abundance of Wisconsin’s breeding birds. With 1,100 participants it has recorded 239 bird species as at least possible Wisconsin breeders.

The Foundation has also supported the Western Great Lakes Bird and Bat Observatory both through the C.D. Besadny Conservation Grant Program as well as with funds raised through the Great Wisconsin Birdathon. The Observatory also has established an endowment fund through NRF that will help it to advance the conservation of birds and bats through coordinated research, monitoring, and education.

I’ve had the pleasure to serve on the Birdathon steering committee, helped lead the Bonanza Hotshots team for a fund-raising bird tour, and been a member of both Hawkeye and the Ancient Murrelets and Cutright’s Old Coots. Taken together these efforts have raised thousands of dollars that have supported important bird conservation projects, but they’ve also brought me closer to a great community of committed birders and conservationists.